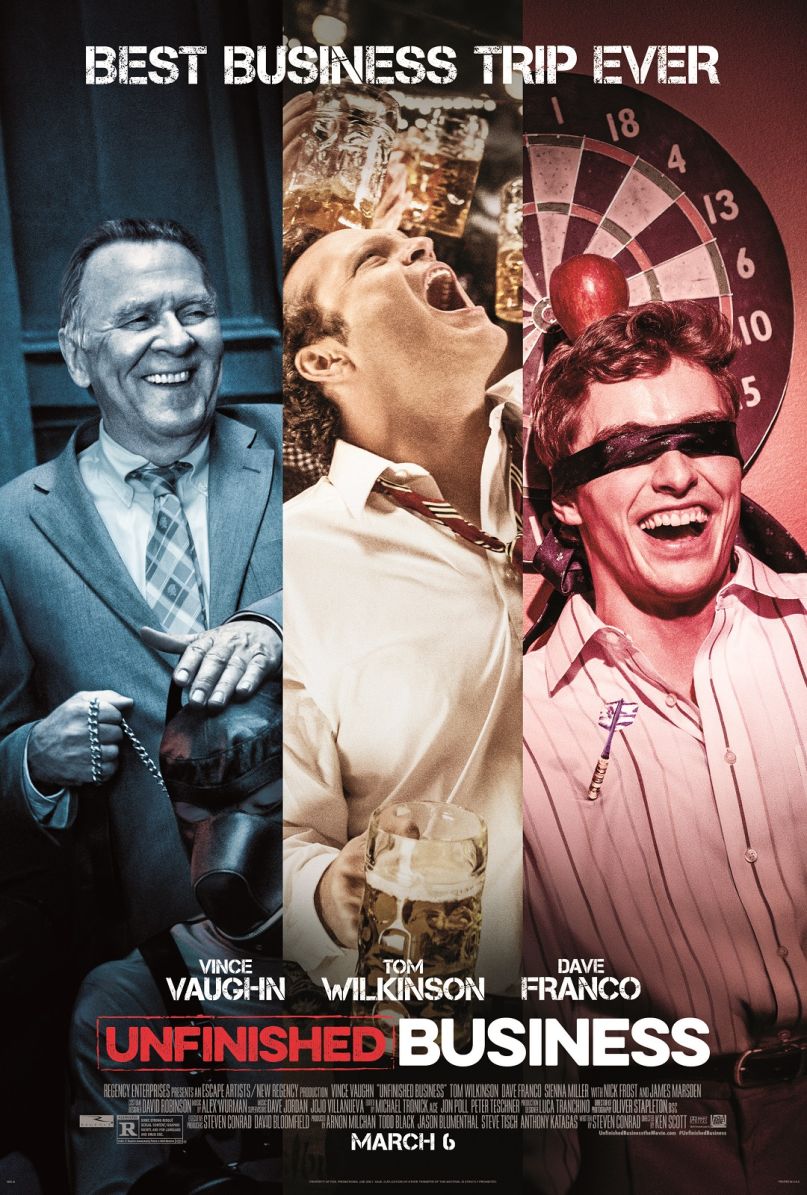 At its most pointed, Unfinished Business likens work stress to school bullying. It’s pervasive, unending, and now digital. Problems during the day have found ways of following you home more easily. It’s a salient metaphor. After all, this is a Steve Conrad script, and the guy seems to understand the nightmares of jobs, and of our aspirations mismanaged by them. “Work leads to happiness, or does it?” Conrad consistently asks. In the past, his own work has been hopeful (The Pursuit of Happyness), snarky (The Weather Man), combative (The Promotion), and even wanky (The Secret Life of Walter Mitty). The guy gets the perils of having a job: the cutthroat politics, the power struggles, the indignation. Unfinished Business seems to want to say that things like Microsoft 365 and the unending cycle of work and evasion is destroying us all. It’s ruining Vince Vaughn’s family!

But then, any real intentions of making that point kind of go out the window the second Dave Franco’s face smushes into an enormous pecker in a gay bar’s bathroom.

Unfinished Business goes for white-collar comedy dressed down to blue-collar sensibilities. It’s like an ‘80s flick where the dudes are working, and the women are either shrews or bare breasts. Gay panic humor, jokes about German liberation, random business dicks, and the most un-earned sentimental ending imaginable lead to a film that just doesn’t work out. It rants, rambles, and does a lot of things that don’t make sense or fail to mesh into even a coherent thought. Vaughn runs a marathon he randomly wanders into after a bender, only to find the strength to finish and thus do anything he sets his mind to. (Yeah, it’s that kind of nonsense.) Slow it down, Vince! You’re always rushing through your stuff.

It’s the umpteenth iteration of the Vaughn motor-mouth persona as he stars as the good-natured, tough-talking, average everyday working man Dan Truckman. Pity his super-power isn’t trucks. No, he sells swarf (metal run-off) with two employees working under him after having a little Jerry Maguire moment and quitting his job. He collects Mike Pancake (Dave Franco, sporting a name that’s funny precisely once), a kid who just happened to be interviewing at Dan’s old company at the time of the walk-out. Dan also has Timothy (Tom Wilkinson, taking it with pride), an old company man who didn’t want to go with Dan, necessarily. No, he’s 67, was asked to leave, and figures he’s got more time to work. The terrible trio embark on a mission to land one big deal that will save them all financially and emotionally. After a year of struggling, they get the offer for a handshake agreement.

Eventually the guys find out last minute that they’re “fluffers” on the deal, brought in to make another bidder more competitive. The other bidder is Dan’s old company, and he has to take on the wicked Sienna Miller, who arrives complete with ball-busting condescension, black pantsuits, and tight hair, all denoting her evil. It would be fascinating if Unfinished Business humanized her, and took a moment to take pity on the brutality that work environments beget, but no. She da villain, Vince da hero.

From there, story-wise, it’s so stock. Wacky obstacles pile up as Dan and the boys race to close a big deal for a lot of money. On swarf. To be honest, that Franco penis gag made this critic laugh way too much. Pancake shakes one politely, like a hand, too. But that doesn’t necessarily speak to the quality. More the jolty juxtaposition of graphic humor, and working man treacle. Work lives and party lives should never mix. Again, Unfinished Business fails itself tonally. It wants to be European Vacation and Working Girl. What we get is retro-male authoritarian hooey with a side of sentiment. May that upcoming stint on True Detective be a glorious change in career trajectory for Vince Vaughn. He’s got to get out of this rut.