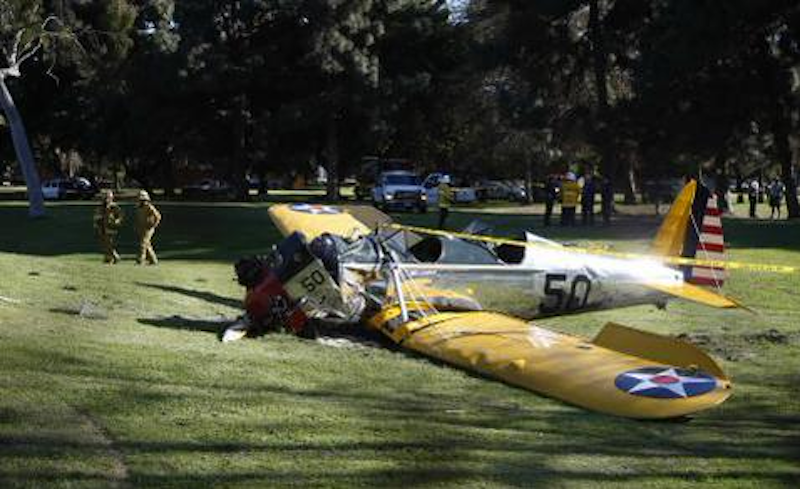 Harrison Ford was injured when he crashed a small airplane onto the Penmar Golf Course in Mar Vista, California.

The 72-year-old actor was piloting a vintage training plane from World War II when he was forced to make a crash landing. Reports say that Ford was able to walk away from the wreck, but that he suffered multiple lacerations and was bleeding from the head. Two doctors who happened to be on the course rushed to his aid before he was taken to a nearby hospital.

Update – 7:30 p.m.: In a press conference, the Los Angeles Fire Department refrained from identifying Ford, but said the patient was “alert, conscious, and breathing” after the crash. They added that the patient was in “fair to moderate” condition.

Update – 9 p.m.: According to his publicist, Ford’s injuries “are not life threatening, and he is expected to make a full recovery.”

Ford was alone in the aircraft, a single-engine Ryan PT-22 Recruit, and was reportedly the only individual injured. Below, see a picture of the crash via NFL Network’s Andrew Siciliano’s Twitter.

That is a definitely a plane in front of the 8th green at Penmar in Venice. Pilot allegedly walked away. Wow. pic.twitter.com/2OXYJOdBu1

Here's another one. Just in front of the green. Pilot was allegedly circling back to Santa Monica after takeoff. pic.twitter.com/yBBta3uhQa