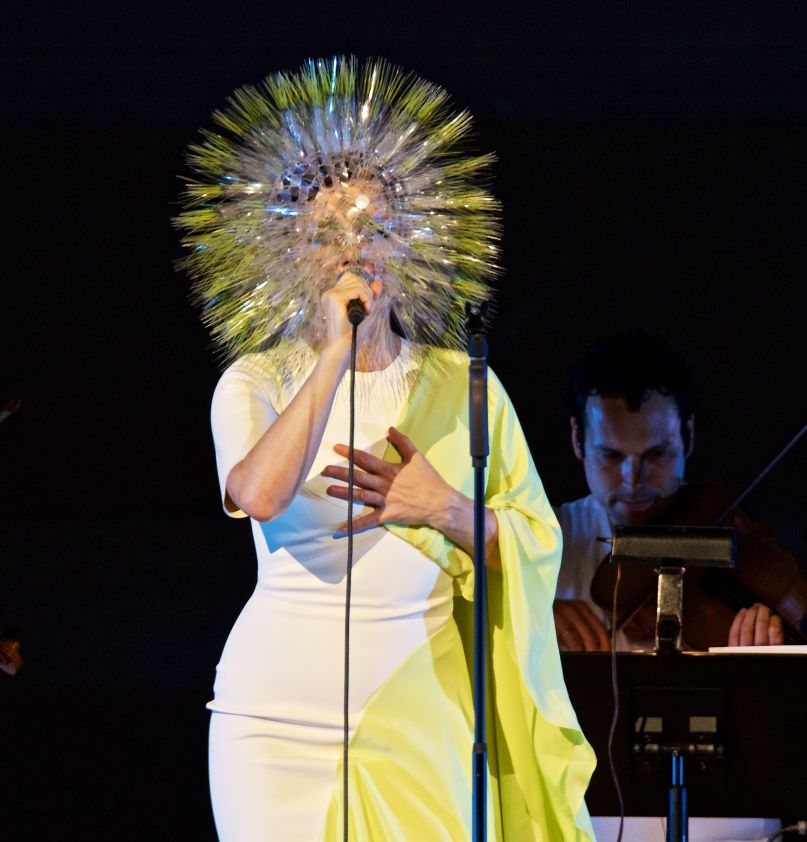 Bjork is known for a lot of things. Innovative music. Wild music videos. A huge voice. That swan dress. One thing we’ve come to expect from her over the last decade or so is enormous, crazy live shows. Each new tour brings a new stage show, each one more intricate and over the top than the last. She creates her own instruments, wears outfits that put Lady Gaga to shame, is always accompanied by stunning visuals, brings along small choirs, horns, strings, etc. But with the release of the ultra-personal and emotionally draining Vulnicura, she created a live experience to match that aesthetic by stripping down her show to just the necessities.

In the second date of her New York residency, Bjork took the stage just after noon, adorned in a flowing dress and the now infamous pinhead mask from the cover of Vulnicura. Surrounded by a 15-piece string orchestra, Alarm Will Sound, in a crescent shape, she took center stage and bared her soul to an enraptured audience. Alarm Will Sound were on point the entire night, seamlessly transitioning from the long, bleak notes of “Black Lake” to the short and frantic notes of “Notget”. Completing the live band were Manu Delago on drums and Vulnicura collaborator Arca covering all things electronic – both were fantastic and complimented the strings perfectly. The setup makes for the most stripped-down live show we’ve seen from Bjork in years, maybe ever. But it was the perfect match to the music found on her new album and made an already intimate Carnegie Hall show even more personal.

Bjork’s intricate and gorgeous headpiece acted as her defense mechanism for the heartbreakingly emotional opening of the show. Nearly the first hour was dedicated to the first six songs from Vulnicura, which are annotated according to their distance from the “event” – her separation from partner Matthew Barney – in the liner notes. They’re the most emotional songs she has ever produced. They’re also directly aimed at Barney, and just as she wanted that to be clear in the liner notes, she also made it clear during the show.

There was a clear divide between these songs and the rest of the show – aside from the obvious 20-minute intermission between the two. While every track from the new album was accompanied by original animated musical scores (made by Stephen Malinowski) in the style of the Biophilia app, only those first six displayed the lyrics as well. She wanted the audience to know every word to those songs specifically, to feel every emotion as she did. It’s obvious that Bjork is still healing, and airing out those feelings is part of her process.

Carnegie Hall proved to be an absolutely perfect place for a performance like this. I’ve never been part of a more attentive audience. No one made a sound when it wasn’t time to applaud – near the end of “Stonemilker”, where the music gets almost silent, you could have heard a pin drop from her headpiece. Bjork was strict about no photos or video, but that usually doesn’t keep people from watching half of any given show from their phones. Not this audience. I counted a total of two phones out during the entire performance, and from the back of the balcony I could see a good bit of the crowd. Even then, the almost comically large amount of ushers shut them down quickly. The applause was exuberant and appropriate, including a standing ovation when Bjork left the stage for the final time. If all crowds were Carnegie crowds, all theatre shows would be better for it.

After the intermission, Bjork arrived back on the stage sans headpiece. She touched on some of her older works – from Debut’s “Come to Me” to Volta’s “I See Who You Are”. These all were accompanied by new string arrangements, which injected new life into each of them. Encore closer “Wanderlust” was heavier than ever, while Medulla‘s “Pleasure Is All Mine” sounded sweeter than ever now being backed by strings instead of voices. Bjork paraded around the stage with some patented Bjork dance moves. You would never mistake it for an upbeat dance show, but she seemed to be having a good time up there. She didn’t speak besides a few thank yous here and there. When she finally spoke more than two words – to introduce the band – you could hear the collective ‘aww’ from the crowd, as she unquestionably has the most adorable accent of all time.

Sure, she performed the same exact setlist in the same exact order as last week, so it might have been a letdown for some that were planning to attend multiple shows hoping to see more songs. However, it’s apparent these 14 songs are the exact ones that fit the overall tone, mood, and aesthetic of Vulnicura, so they’re the ones she wants to be presenting at this particular time. Think of this residency as a companion piece to her MoMA exhibit they are meant to coincide with anyways; she has a specific vision for these performances that needs to be consistent from show to show. Besides, building a setlist for a string orchestra is much more difficult than your average show, especially since she created new arrangements for most of the older songs. Who knows, maybe she will still change it up once she gets to the other venues and plays normal night shows instead of these matinees. What will really be interesting is to see how the setlist – and makeup of the band – changes after the residency when she plays festivals and elsewhere around the world. Enjoy this presentation while you can in New York City, because there will probably never be another Bjork show quite like it.