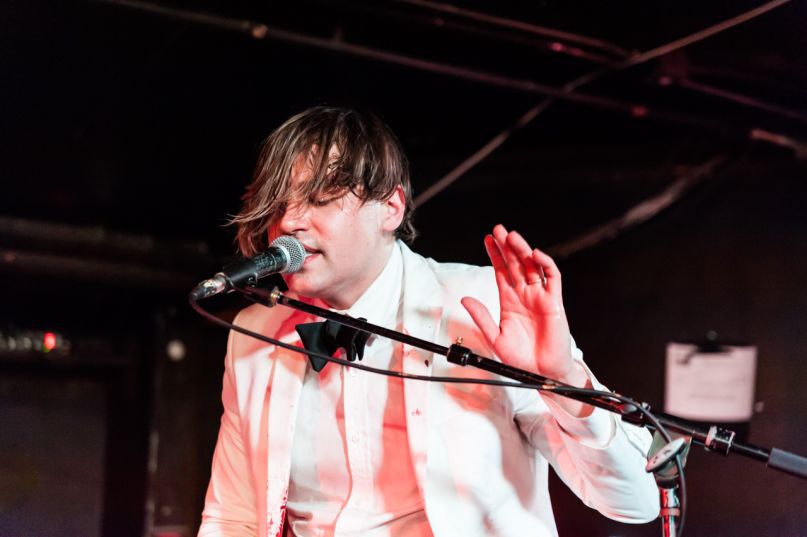 In the midst of the fervor that Arcade Fire drum up during their live show, Will Butler always seemed to be the most attention-grabbing band member of them all. Yeah, brother Win strikes an imposing figure over the proceedings and sister-in-law Regine is prone to bursts of joyous dancing, but Will always provided the manic energy that stoked the flames of both the band and the audience. Just check out earlier, Funeral-era concerts to see Will enthusiastically running across the stage, hastily switching between instruments, and occasionally stopping to get into fake fights with Richard Reed Parry, which have sometimes resulted in real injuries. Though the bloodshed has since relented, he still manages to whip himself into a fury as he smashes a Moog into oblivion during his short solo in “No Cars Go” or dances around during “Here Comes the Nighttime”. During “Rebellion (Lies)”, he is the beating heart of the band, and his passion for performance never fails to come through.

His first solo album, Policy, channels that wild energy into songs that jitter and bop around various genres, though ultimately focusing on being some sort of homage to his favorite American bands (Pixies, The Breeders, Violent Femmes, Talking Heads, etc.). They also feature some hilarious lyrics about punching birds and cooking up his famous pony macaroni recipe. These are lyrics that Win has described as being “in this realm in-between serious and poetic and funny and absurd – like Annie Hall or The Simpsons.” It’s a charming little record that is far removed from the grandeur of Arcade Fire.

Originally set to play at T.T. The Bear’s Place (side-note: check out the bootleg of Arcade Fire playing there back in 2004; it’s awe-inspiring), Butler’s show was moved to the Middle East Downstairs after quickly selling out within a few days.

Openers TEEN brought some beautiful harmonies and slinky, XX-esque R&B jams. They slowly found a slick groove over their 40-minute set, with bassist Boshra AlSaadi laying down some smooth, slightly overdriven bass lines over minimalist drumming and keyboard fills. All four members proved themselves to be very talented vocalists by taking turns harmonizing with each other, creating ethereal sounds that would morph and shift around the stage.

Butler’s stage setup was a small treasure trove for trainspotting Arcade Fire fans. Is that the same black acoustic that Win uses? Is Will’s white, blood-stained tuxedo the same one he occasionally wore last tour? Is that Win’s brother? (That one should be obvious). However, while it’s clear that the good majority of the crowd attended based on the strength of Arcade Fire’s material – after all, Policy only just came out this week – Butler is intent on forming his own identity. With a touring band consisting of two backing vocalists, a keyboard/synth player, and Antibalas’ drummer, Miles Arntzen, Butler dove into a surprisingly long, 17-song set.

While Butler is quick to note that recording Policy was not a DIY affair, the accompanying tour certainly feels more homegrown than Arcade Fire’s massive, high-concept tour behind Reflektor. The light show consists of a string of Christmas lights decorating the drums, and the only costume involved is the aforementioned white tuxedo. The music follows suit, reveling in a ramshackle, punk intensity. Though Butler makes a fine frontman (a skill he undoubtedly gained by spearheading the many covers Arcade Fire did last tour), he clearly hasn’t given up any of his wild intensity as he still jumps between instruments, causing a delightful ruckus with anything he can get his hands on. His backing band are just as joyous, gleefully dancing away. “Anna”’s new wave-y intro set the crowd off, and the rest of the night was filled with polite head bobbing and swaying from an enthusiastic but somewhat subdued crowd. The newness of the music was somewhat of an impediment, but the crowd clearly enjoyed Butler’s energetic and captivating stage presence.

Butler didn’t say much throughout the set, though he quickly joked: “I just flew in from New York, and boy am I fucking cold!” Instead, he let the music do the talking, and it’s obvious that Policy works a lot better in a live setting. Every song was more lively and grooving, accumulating into an old-fashioned rave up by the end of the set. Not content with being just “Will Butler of Arcade Fire,” he’s hard at work forging his own exciting and lively act.

Setlist:
Cold
Son of God
Clean Monday
Anna
Finish What I Started
Surrender
You Must Be Kidding
Sun Comes Up
Madonna Can’t Save Me Now
Something’s Coming
Public Defender
What I Want
Sing to Me
Witness
American Music (Violent Femmes cover)
Take My Side
I Don’t Know