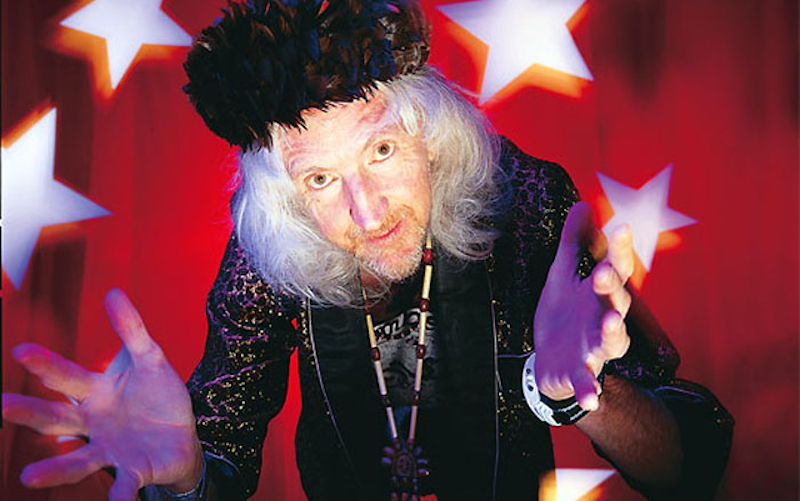 Daevid Allen, founder of progressive and psychedelic rock bands Gong and Soft Machine, has died at the age of 77. The Australian musician lost his long battle cancer.

And so dada Ali, bert camembert, the dingo Virgin, divided alien and his other 12 selves prepare to pass up the oily way and back to the planet of love. And I rejoice and give thanks,” he wrote. “Thanks to you dear dear daevid for introducing me to my family of magick brothers and mystic sisters, for revealing the mysteries, you were the master builder but now have made us all the master builders. As the eternal wheel turns we will continue your message of love and pass it around. We are all one, we are all gong. Rest well my friend, float off on our ocean of love. The gong vibration will forever sound and its vibration will always lift and enhance. You have left such a beautiful legacy and we will make sure it forever shines in our children and their children. Now is the happiest time of yr life. Blessed be.”

Allen revealed in February that he had been given six months to live after a previously treated cancer had spread to his lungs. “I am not interested in endless surgical operations and in fact it has come as a relief to know that the end is in sight,” he said in a statement. “I am a great believer in ‘The Will of the Way Things Are’ and I also believe that the time has come to stop resisting and denying and to surrender to the way it is.”

Born Christopher David Allen in 1938, the singer moved to the UK in 1961. There, he first formed the free jazz group Daevid Allen Trio, before teaming with Robert Wyatt for Soft Machine. The band became a beloved underground fixture, going on to a well-received tour in the France. However, Allen was denied re-entry back into the UK following the 1967 trip, and was forced to remain in Paris.

There, he formed Gong, a band with which he found great success. Their space-rock, jazz, and progressive fusion led them to great success over the course of seven albums during the ’70s, including their Radio Gnome Trilogy: Flying Teapots, Angel’s Egg, and You. Allen left the group for a solo career in 1975, returning to the Gong name some 26 years later. He toured and recorded with the band intermittently until 2014, releasing five more albums.

Below, watch Gong performing “I Never Glid Before” live in 1973.