"You cannot commercialize a subculture without actually knowing all the different aspects of it." 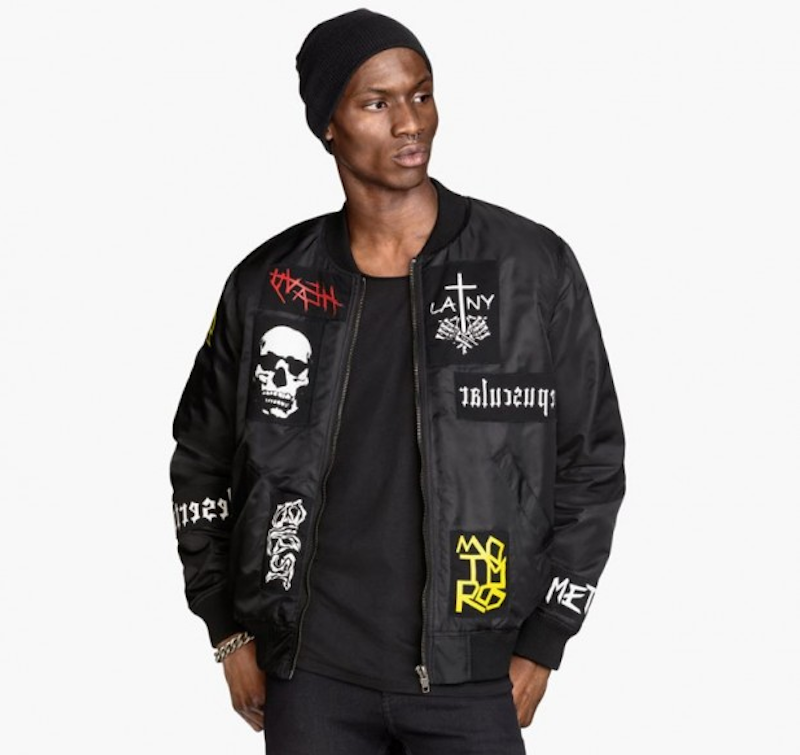 H&M is no stranger to attempting to capitalize on the popularity of musical subcultures, like with their recently launched Coachella line. But the Swedish clothing retailer trying to make metal style hip and affordable with their new spring clothing line has left some actual metal-heads less than impressed.

While the new line features Ts branded with band names and images from the likes of Metallica and Slayer, there are also items bearing the names Mortus, Lany, Grey, and Mystic Triangle. You can see some of these names on the leather jacket above. And that’s where the story starts getting strange.

Some time yesterday afternoon, a press release went out from a company called Strong Scene Productions, run by a man named Ville Huopakangas. Metal Sucks has the whole thing, but it essentially went about praising H&M for honoring “legendary underground metal acts from [the Strong Scene] roster.” It even provided a brief description of the bands: “..the new items feature logos from long-forgotten underground goth- and thrash acts such as the French LANY, Mexican MORTUS, American ‘cosmic hippie metal’ -gurus MYSTIC TRIANGLE and GREY from Germany – the originator of the whole symphonic female metal-genre.”

Strong Scene went on to say that to celebrate the new found attention, they’d be releasing a new compilation of material from the acts. They released album artwork, band pictures, the whole shebang. Reddit pages popped up extolling the return of the bands. There’s even a YouTube sampler and playlist highlighting some of the tracks:

But here’s the kicker: None of these bands are real. Strong Scene’s not real, either. Their website has been pulled down, their Twitter and Facebook pages are less than a week old, and Ville Huopakangas simply doesn’t exist. The company’s newest signee, the Bristol act Metal, ain’t real either.

So what’s happened here? Some speculated that it was all an intricate marketing ploy by H&M themselves to sell their products. However, in a late-night Facebook post Strong Scene revealed itself as a “collective art project” aiming to demonstrate to H&M that it should be fully aware of a genre before it tried to market it.

Henri “Trollhorn” Sorvali, keyboardist for Finntroll and guitarist/keyboardist for Moonsorrow (both real bands from Helsinki), admitted in an interview with Noisey that he is indeed a member of the Strong Scene collective. Sorvali stated that the group’s purpose in the elaborate hoax “was to create discussion on the fact that metal culture is more than just ‘cool’ looking logos on fashionable clothes.” But more than that, he said, they “also wanted to point out the fact that you cannot commercialize a subculture without actually knowing all the different aspects of it. Knowledge on your product is essential in marketing, and Strong Scene supports self-awareness and education for everyone on the matter.”

Essentially, Strong Scene was trying to show that you can’t just slap a gothic-looking patch on a pair of jeans and call it metal. Metal music has a depth and variety to it that is ignored when a corporation lumps it all together with black clothing and scrawled logos.

Sorvali emphasizes that neither he nor any member of the collective was hired or paid by H&M. In the end, it was all one mega hoax that fooled just about everyone for a whirlwind 24 hours. Applause for that, if nothing else.