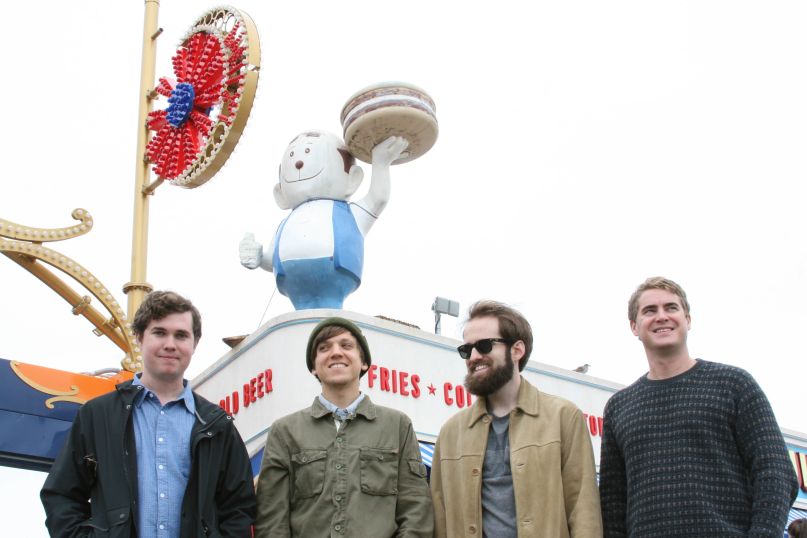 For their first album since parting ways with their major label, indie rockers Surfer Blood opted to return to their DIY roots. The quartet holed up in its home studio to forge their new material sans a producer. Those sessions resulted in 1000 Palms, out May 12th via Joyful Noise. We’ve already heard the band’s manic “Grand Inquisitor”, now they’re indulging their inner guitar nerds with their first official single, “I Can’t Explain”.

“’I Can’t Explain’ is one of our most collaborative efforts to date,” frontman John Paul Pitts said in a press statement. “The hook just came to us one day in the practice space and we wrote the rest of the song around it. The lyrics (by Kevin Williams) tell the story of a romantic encounter on a New Year’s Eve past and build slowly with the rest of the song. I’ve always been keen on a long instrumental outro, so this seemed like the perfect spot for a long, jammy guitar section — a place for us to get some Yo La Tengo/Built to Spill guitar fetishizing out of our system.”

The track is one of the moodier entries in the Surfer Blood catalog, moving at a slow and deliberate pace as opposed to previous brash, punk squabbles. Pitts sings with restraint atop dreamy layers of guitar and tom-heavy drums. The band revels in the ethereal aesthetic, creating a lush and blissful atmosphere. Listen in below.

“I Can’t Explain” is available as an instant download with pre-orders of 1000 Palms. There’s also a limited-edition 7-inch version b/w a cover of The Verlaines’ 1987 track “Death & The Maiden”. Place your orders over here. Surfer Blood has a string of tour dates coming up this month, including a range of South by Southwest shows. Check out their itinerary below.