Plus, reports on The Districts, Sophie, Mitski, and King Tuff 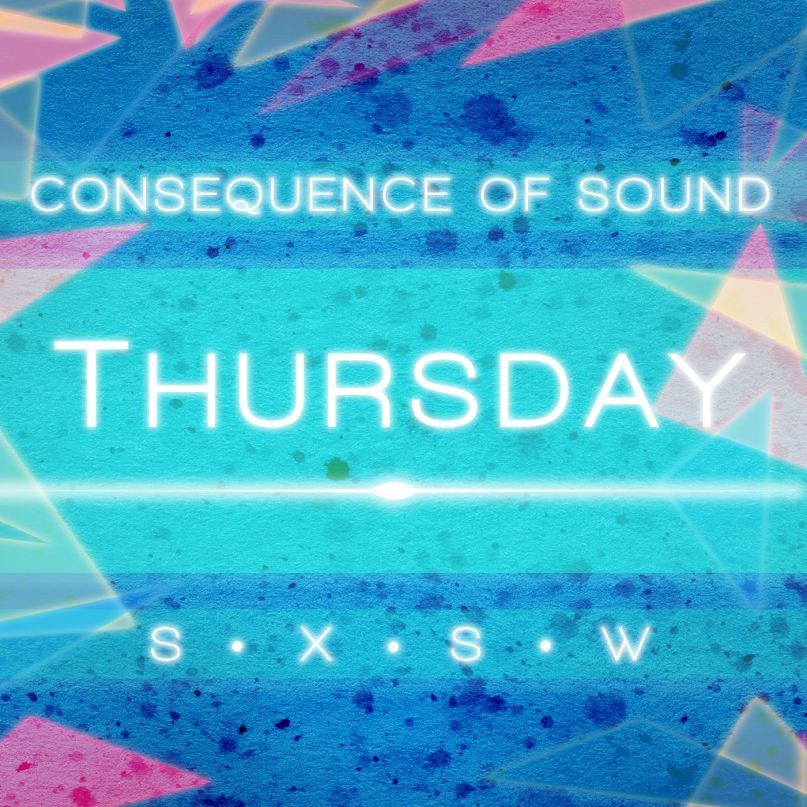 The third day of South by Southwest came with a reprieve from the constant venue hopping as it opened with our own CoSigns IV party. Our Texas-themed banner hung high above the heads of hundreds of attendees, welcoming them to an event billed with some of the best talent in town.

And once the glory of our of hand-curated show was done, it was back onto the streets, pounding pavement to discover new artists and new friends. With Thursday in the books, we’ve crested the hump of the festival, and will soldier on through the final days. Bring it on.

Click here to see our full coverage from SXSW and listen to an exclusive playlist. Also visit Toasty.TV to check out Quizno’s curated entertainment hub.

Natalie Prass began her career as the keyboardist for Jenny Lewis, so it makes sense that she started her show sitting at the keys. Her set of delightful soul sounds was a sweet way to kick off the third day of SXSW as the Austin heat crept in through the clouds. Without a horn section, the set was lacking the fullness of an album laid down in Richmond’s Spacebomb Records, but the three-piece band on hand provided just enough gentle support for Prass to deliver renditions of the tracks from her self-titled debut with even more delicacy. She introduced her band like a sultry lounge singer during “It Is You”, noting that they had just met her new guitarist two days prior. He fit in as smooth as Prass’ vocals, smiling at his new bandmates as he played along. While that song, which she partially sang to a Godzilla toy, showcased what some are calling the Disney Princess quality of her voice, she displayed a soulful, folkier tonality on songs like “My Baby Don’t Understand Me”. Whatever genre aspects she dipped into, it was all a beautiful way to start a beautiful day. –Ben Kaye

Let’s talk about “Young Blood” for a second: It’s the penultimate track on The Districts’ debut album, A Flourish and a Spoil, and their most talked-about cut from what’s typically a humid, aggressive, and heartful set. Together, the Pennsylvania rockers hit the Hype Hotel early on Thursday afternoon to assemble a swift half-hour of their alternative crunchy rock. The majority of their selections impressed, especially “Chlorine” and “Peaches,” but their aforementioned nine-minute anthem is what really roped in a proper swath of devotees, eliciting fists and screams and dozens of bouncing Chucks. Everyone’s an overachiever at SXSW — you have to be, you just have to be — but getting that sort of response at such an early hour and after two sloppy nights of drinking and what have you … well, it’s a pretty good sign, nonetheless. –Michael Roffman

When one of the dudes in the King Tuff camp starts by saying, “This festival is about music and food,” you’ve got to suspect that there’s a punchline coming. And sure enough: “But mostly about hooking up.” Followed quickly by: “And terrible, terrible drugs.” Kyle “King Tuff” Thomas and compatriots are just those sort of guys, the good, old-fashioned rock ‘n’ roll of “Beautiful Thing” and “Black Moon Spell” (highlights of their rollicking set) containing that blend of approachable sweetness and smirking mischief. It was hard to tell which was more artfully bedazzled, Tuff’s guitar (which featured multiple sheriff’s badges) or his sharp denim vest (which featured a crescent moon, a devil, and a pyramid). The Closer “Bad Thing” received a loop of appreciation from the diehards in the front, Tuff picking away at yet another massive riff. And, in that moment, that smirk was far more than hypothetical. –Adam Kivel

Slothrust has kind of a mean streak, but frontwoman Leah Wellbaum’s sense of humor drives it home. The New York band played in someone’s living room on a hot Thursday afternoon for a day party hosted by the magazine, She Shreds. Family photos lined the walls, and all the furniture that had been pushed to the side felt lived in. Accompanied by a bassist and drummer, Wellbaum sang zingers like “some men purchase RealDolls to fill the void … Don’t shake hands with the lonely kids/ Cause I hear that shit’s contagious.” In another new song, she outlined more of a philosophical quandary: “I don’t have anything in common with myself,” she screamed over the raw bite of her own guitar. Slothrust has that slacker grunge feel down to a T, but the words Wellbaum filters through it transforms the music into something urgent and alive. This band has been lurking for years; I’d love to see them launch their hard rock musings into a much larger space. –Sasha Geffen

The four Seattle ladies of Chastity Belt came on stage with matching sunglasses and went about delivering laid back vibes perfect for the shade of Red 7’s patio. “Shout out to anyone out there wearing sunglasses like us,” lead singer Julia Shapiro said after their opening number. “We feel pretty cool right now.” She then introduced “Cool Sluts” in a dry, downer tone, a touch of sarcasm from a band known for their cheeky, blasé personas. Their music certainly fit that mold, as their chilled out stoner rock tunes were played with almost complete nonchalance. It made for an easy-going set, and the band clearly enjoyed themselves even if it wasn’t the sort of in-your-face playfulness of many indie outfits. Gretchen Grimm kept her head bobbing in rhythm to her drumming, guitarist Lydia Lund grooved in her ’50s go-go getup, and bassist Annie Truscott dipped and bopped even with her knee in a brace. It was an unhurried performance amongst friends who often shared smiles or simply watched their bandmates work, and it made for a wholly pleasant midday show. –Ben Kaye

Having spent the majority of the past three days at Hotel Vegas, I’ve seen an endless stream of garage psych, to the point where I’m struggling to recall every set. There’s three I definitely won’t forget: Thee Oh Sees, Destruction Unit, and WAND — a relative unknown that, as Mikal Cronin recently put it in a tweet, has the potential to be “The Biggest Band in the World.” Playing yesterday’s Levitation party at Hotel Vegas (a pre-Austin Psych Fest gathering), WAND took a major step toward global domination, playing the best cuts from their new album, Golem, and taking the sparse afternoon crowd on a journey of ascending and descending guitar noise and prog-pop sludge. Vocalist/guitarist Cory Hanson swung himself around the stage, every note triggering an animated body spasm. If he held a string bend, he’d lean back, his figure forming a gravity-defying semi-circle. Trippy, catchy, and utterly heavy, WAND sounds like nothing else. They have songwriting to break scene barriers and bring together freaks, punks, popsmiths, and metalheads alike. The world takeover has begun. –Jon Hadusek

From the moment Mitski sound-checked her vocals with a round of otherworldly choral “oohs”, you knew you were in for a special vocalist. The Brooklyn singer-songwriter opened with the one-two of “Townie” and “First Love/Late Spring”. The pairing kicked off a set that saw her alternating between indie rock punches that showcased her rollicking side and kicked-up ballads that highlighted her warbly, neo-classical vocals. It was an interesting mix as it demonstrated how hard she could thumb that hot pink bass of hers while simultaneously accent a voice largely unique in recent indie rock. The combination had clearly already earned her many fans, as the house was more packed than for any of the prior acts. In fact, Chastity Belt and Speedy Ortiz, who were both also on the bill, were seen taking in the show, with the latter’s Sadie Dupuis singing along to “Francis Forever”. For closer “Class of 2013”, Mitski was left alone on the stage, thumbing the neck of a guitar resting on its stand as she sang the rather heartbreaking lyrics, actually screaming into it for the final verse. It was there that it hit me what her musical blend really is: She’s an “artists’ musician”, but lacking any of the inaccessibility something like that infers. –Ben Kaye

Though it’d be impossible to prove, I’d like to bet that Seattle surf rockers La Luz were the only band this week that used a bit of “The Monster Mash” to soundcheck a mic. That came courtesy of drummer Marian Li Pino, who kicked the quartet into gear throughout their sterling set out on the patio at Hotel Vegas. The honeyed harmonies of keyboardist Alice Sandahl and bassist Lena Simon drenched the set sweetly, but Shana Cleveland’s vocals on “Sure as Spring” proved a shiver-inducing highlight. Their set drifted as easy as a summer breeze between girl group pop a la The Ronettes to Ventures surf instrumentals, all without breaking a sweat. Later, It’s Alive single “Big Big Blood” brought the beaming crowd to a uniform sway. Whether it was Sandahl’s helpful muting of Li Pino’s cymbals or Simon and Cleveland’s synced throwback dance moves, it’s clear that these four are growing more and more in sync. –Adam Kivel

Viet Cong’s livid arms climbed high upon the scales à la Omar Rodríguez during his nastiest At the Drive-In days, while drummer Mike Wallace’s one-handed rumbles settled that he’s still the go-to teammate in a pushup contest. (He was nursing a broken arm.) Quite a way to start the evening. The Calgarian group’s abridged, painfully short set still ensnared a shoulder-to-shoulder warehouse crowd with nihilistic prog magnet “March of Progress”. Frontman Matt Flegel didn’t think about the heat, his injured pal, nor the other sets he still has to crank out this week to please a ravenous Austin congregation. Flegel found his zone and delivered. Viet Cong closed the gig with an anxious rendition of “Continental Shelf”, proving they’re the band to see live this year. It’s a different sound than the group’s previous incarnation, Women, but Thursday’s show established things are sliding in the right direction. –Dan Pfleegor

Sometimes Thee Oh Sees’ John Dwyer seems like a cool uncle. During earlier sets in the Levitation Day Party, he goofed off with the younger bands. As WAND tore into a particularly ferocious riff, he lit a bit of brush afire, just so he could waft some smoke their way, a huge grin on his face. But get the guy on stage, and there’s a furious energy that can’t be contained by any sort of fun relative trope. At one point during Thee Oh Sees’ heavily attended set, Dwyer picked his beer off his amp with his mouth, and drank the thing down — all without pausing his guitar solo. The dual drumming of Nick Murray and Chris Woodhouse ensured that his guitar would never be without a thundering platform from which to leap, and Timothy Hellman’s rubbery bass bounced the whole way along. When the day’s first crowd surfer bobbed up to the surface of onlookers, Dwyer gave some sincere encouragement: “Get him up, he’s a big boy.” It seems that no SXSW is complete without a raucous set from Thee Oh Sees, and though it was a set under the afternoon sun and some trees, the crowd certainly got to check that off their list. –Adam Kivel

Click ahead for the rest of our Thursday coverage along with an exclusive gallery.