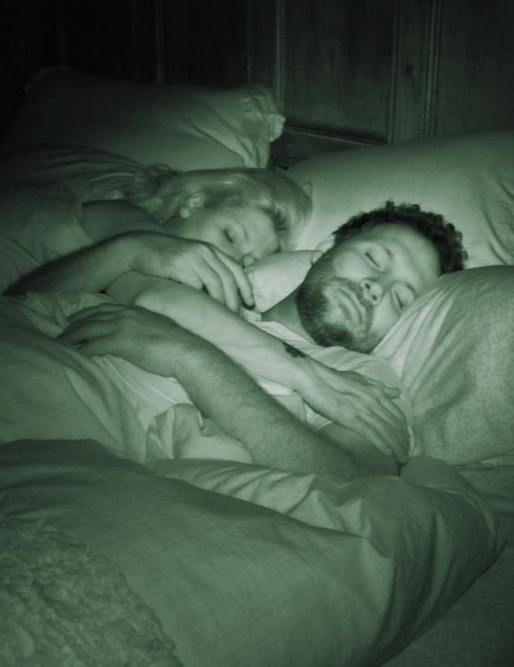 Don’t be fooled by the found-footage visuals: Hangman is less a jump scare marathon in the Paranormal Activity mold than a slow (slooooooow)-burning home invasion thriller, the kind of film that works when the payoff justifies the film that precedes it. By and large Hangman’s underwhelms, but that’s not to suggest that the film is entirely meritless, just that it still falls into many of the clichés and pitfalls that so many films of this sort do.

After an eerie, brutal prologue, Hangman follows a family who’s just returned home from a two-week vacation to find their home ransacked, broken into and littered with remains in such a way that it’s clear somebody didn’t just rob them. Somebody was living there. Understandably shaken, they attempt to re-acclimate to everyday life, only to find that their strange visitor may not be as much a thing of the past as they might hope. Things start disappearing, personal belongings start getting rifled through, and before long Hangman starts to capably prey on the terror of being watched at all times, having to constantly wonder exactly where something could be, and what it might be, and what it could do to you if you’re not just crazy and it’s actually there.

The film’s main hook, and virtually its only distinguishing one from most found-footage offerings, is the visual approach, one which forces you into the mysterious figure’s point of view. It’s a creative choice equal parts interesting and lurid, one which makes Laura Mulvey’s male gaze as literal as possible, implicating you in a demented man’s invasive, often leering perspective. To criticize it as exploitative wouldn’t be entirely off-base, but it’s Hangman’s primary source of terror, and it’s effective. By assuming the mostly wordless, heavy-breathing perspective of a shadowy serial killer type, Hangman periodically manages to overcome its generic trappings by telling the story of a psychologically disturbed, sexually maladjusted monster from its point of view.

Once you take that device away, though, Hangman quickly starts to resemble a lot of other movies, from the slow reveal of the pantyhose-clad invader’s motives (lip balm is slowly applied in mirrors, photo albums are cried into, underwear drawers are pilfered) to the film’s biggest scares coming from the expected appearances in negative space of things that shouldn’t be there and the terror of figures standing in rooms while people sleep. The cast is forgettable, from Jeremy Sisto as the doting patriarch of the household on down, in large part because the film’s approach leads to the family and those around them feeling like insects in a terrarium. It’s an eerie way to portray the violation of home safety, to a point, but it also takes a lot of the building terror and intrigue out of the film.

After a point, Hangman also gets far too dependent on the idiocy of every character involved to keep the film moving, to a rather grating extent. While many of the film’s scares do land, and it manages a consistent atmosphere of unease throughout, almost every one is predicated on one or more family members behaving in the most irrational way possible in order to put them in position to be panicked; a particularly egregious example involves accusations of infidelity being built, only to disappear in seconds, never to be mentioned or paid off again, when it’s time for another strange noise to startle the once-happy couple. Hangman isn’t the worst found-footage film to emerge from the boom, even in its waning days, and its brisk runtime ensures that it doesn’t overstay its welcome. But you’ve seen this movie before, and you’ve absolutely seen better iterations.