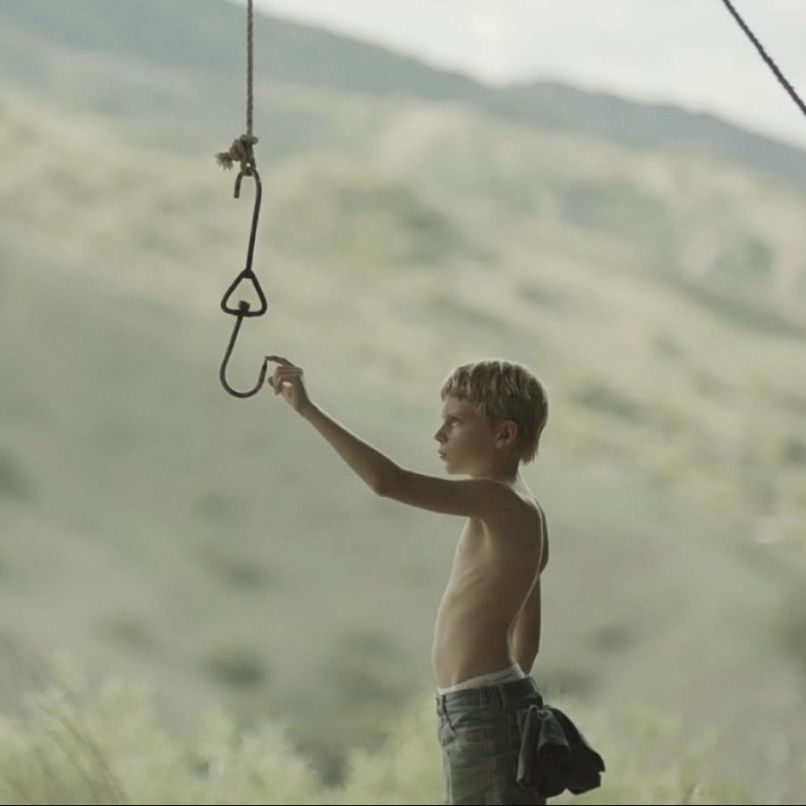 When you live in the kind of dry, isolated place that Ted (Jared Breeze) has had to call home for his entire young life, it’s understandable that you’d start to seek out anything that could entertain or intrigue you, no matter how fleetingly, or what the consequences might be. Ted and his near-silent, hard-drinking father John (David Morse) live in one of those roadside motels in the American Western desert, the kind of place that probably saw a great many come and go when road trips were the fantasy of the public consciousness and have since been abandoned by time, technology, and even maps. At present, John runs the motel, and Ted maintains it, and John mostly just sits in his chair day and night while Ted wanders through the surrounding wilderness, collecting roadkill for quarters and exploring drainage pipes and the nearby junkyard.

At the tender age of nine, you’d think Ted would be more concerned with the ennui of his everyday life, but other than the perpetual fantasy of one day escaping to Florida to be with the mother who abandoned him and John many years before, leaving only a postcard, Ted isn’t too concerned. What interests him more is death, in all its forms. The Boy is about a different kind of journey into maturation, a far more disquieting one than most coming-of-age tales tend to address. As Ted’s fascinations move from animals already dead to animals living, from his own barely contained feelings of frustration and anger (but never sadness) to the ways in which he might channel or purge those, his ability to quietly remain in his current situation starts to come into question.

It’s in Ted’s rare interactions with anybody beside John that The Boy finds its muted purpose. A drifter (Rainn Wilson) crashes his car outside the motel and takes temporary residence, and while Ted is far too young to see just how questionable (at best) this man is, John starts to worry about the man and child’s burgeoning kinship. A family stops in to rest for the night, a man and woman and their young son, and Ted doesn’t have to think too long about pulling enough wires to keep them there a while longer. A prom party invades the hotel for an evening of drunken, consequence-free bacchanal, and Ted gets to witness a kind of entitlement that hardly exists in his world, but is every bit as repulsive as it s elsewhere. All of these moments are filtered through Ted’s deliberately narrow worldview, and this is perhaps why The Boy noticeably drags throughout. Director Craig William Macneill hits so heavily, and so frequently, on the same cyclical beats of Ted testing a boundary, crossing it, shrinking back, and pushing forth anew that the film’s monotony at times feels less like a proper aesthetic choice and more a weakness of form.

However, The Boy’s eventual unraveling does make strides toward earning what precedes it. Ted really has no future ahead of him, and Macneill captures this in the rare moments when John actually takes the time to talk to his son. John’s dreams, whatever they might once have been, collapsed years ago, and it’s clear that it’s only out of spite for his departed wife that he’s even bothered to remain in the motel at all. (Well, that and the fact that other than Ted, he has nobody else to whom he could return.) Ted’s future, if any, is to become John when John’s body finally gives out one day. He knows Ted is getting older and that the young man isn’t too far away from that age at which restlessness starts to get hazardous, but isn’t certain or even entirely interested in how to combat that.

If the film itself slips a little too easily into the banality it’s chronicling at times, The Boy is sustained by the measured performances of the handful of wayward souls in its sparse, bleak world. Wilson and Morse play complimentary and yet directly opposed versions of the same weathered, weary man, one running from some sort of largely unspoken past tragedy and another entombing himself in the same. And Breeze, as the deeply troubled Ted, manages to find the perfect balance between the vulnerability of youth and the malignant anger that takes hold of some people as they get older. Ted’s had to get older a lot faster than most boys his age, and one of the first lessons he’s learned is how quickly things can get old, weaken, and die. What he ends up doing with that is in his hands, and The Boy’s most disturbing facet is the possibilities it imagines for not what he’ll end up doing, but what he might be capable of doing.