20 years later, Muriel's Wedding still reminds us of what matters most. 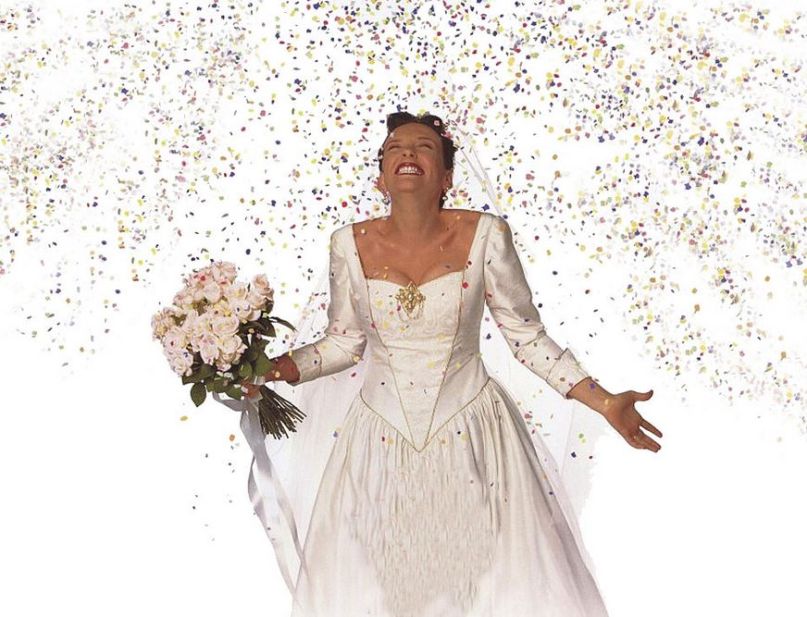 With Muriel’s Wedding turning 20 this week, Patrick Gill took a look back and found that this oddball film about a marriage-obsessed girl still offers a number of lessons for us all.

I didn’t like ABBA. I was still burning off the tail end of a punk adolescence, so disco sucked. It probably had more to do with internalized homophobia than I’d like to admit,  and “Dancing Queen” reminded me of when they tried to make middle school dances jokey or palatable for adult chaperons. I had too many feelings to be jokey at 13, apparently.

I was embracing camp elsewhere, with the help of Almodovar films, but sonically I was stunted. The moment of revolution came 25 minutes into Muriel’s Wedding, the fifth act of the Hibiscus Island Star Search, Fabba Abba’s lip synch of “Waterloo”.

At once everything was garish and perfect. Like a bewigged and spangling Toni Collette, I settled into this new way of living in rhythm with the performance, becoming quietly rapturous because who wants to freak out their roommate that they’ve known for two months (praise Craigslist)? It was the feeling a song or film can give you, being bigger and stranger than you are and still being wholly yourself.

If I want to be honest, though, I only remembered how that scene first affected me the most recent time I watched the film, reviewing it for the 20th anniversary. Maybe that exact scene wasn’t a revolution, but it came at a pivotal moment for me; it was another wind at my back pushing me towards better days. I just remember I loved the film, every time I watched it (an average of twice a year since 2009 — a minimum 12 times). It isn’t the cinematic embodiment of self-acceptance, but no one film can be. It’s a good movie, one that deserves repeat viewings, even if it becomes background fodder. Muriel’s Wedding taught me to distrust the want for watershed moments and singular paths to happiness (or even worse, someone else’s paradigm), to focus on what you have and what you love, and to let moments come to define you rather than hunt for the definitive moment. What it continues to teach me is to be a better friend, to myself and those I love.

The beauty of Wedding, like its protagonist, is that it’s unassuming. It lacks the gloss and pomp of Baz Lurhman ventures and the grit of the Road Warrior series. The costumes don’t bustle with importance (though they are big, bright, and typify the ’90s), there is less scope and scale, and there are no real wide shots of majestic scenery.  The stakes aren’t as high as controlling the water supply or fending off land pirates, but to women of P.J. Hogan’s Porpoise Spit, Australia, marrying, finding a groom (read: a groom more than a husband) is the highest achievement.

A grade 10 dropout lacking employment or career drive, Ms. Muriel Heslop (Toni Collette) has lost a few secretarial jobs. Her arrogant father believes it’s due to her lack of typing abilities. Where everyone else at home is unfocused, young, slovenly, perpetually smoking, on the phone, or kicking a milk carton around the unkempt back yard (with Aussie Rules or Rugby dreams unrealized), Muriel plasters her walls with bridal magazine clippings next to her ABBA posters. She sits at her vanity with her tape deck cranked. It’s some time in the early ’90s, but she has disappeared into the satin and sequins of ’70s Swedish pop.

Muriel is prone to escapism because her reality is clouded by the shouting of her father — that she is worthless, pitiful, and that her continued existence is predicated on his political clout. He is Bill Heslop (Bill Hunter), town council president, corrupt philanderer, and coiner of the slogan “You Can’t Stop Progress.” People buy in to Bill the Battler, believe he is a godsend, even though his developments forced Aboriginal Australians off protected land.

Though Muriel is the only one we see manifesting this bridal desire, we feel it from her peers — save for the marvelous hedonist Rhonda (Rachel Griffiths). She comes later; she was saved by Sydney. Muriel catches the bouquet at the wedding in the opening shot, and her friends throw a tantrum because Cheryl has been dating someone for six weeks (“She’s next”). These few women Muriel calls friends were her high school bullies, but time marched on, and with no one leaving town, they became a clique. Muriel is on the fringe but present, but not for long.

They leave her to sob, into a neon drink named The Orgasm, because she’s not “mad” like they are. They go on to continue planning a ladies holiday in front of her. Muriel, emboldened by a job offer from her father’s business associate (read mistress) selling cosmetics, jumps. She pockets all the checks she convinced her mother to write for cash and skulks behind her former bullies/friends/pack of conniving jag-offs. In the midst of her tailing/holiday, while wearing sunglasses in a restaurant at night to avoid being too noticeable, she becomes reacquainted with Rhonda.

Rhonda dropped out grade 11, Rhonda the short-haired sexpot played with distinct charm and vulgarity by Rachel Griffiths, Rhonda who would rather swallow razor blades than sit with Taina and Cheryl and their ilk, she’s got Muriel. She is a glorious strumpet, self-possessed and empowered, perhaps leaning towards risky behaviors, but the ones expected with youth; she’s working shifts at a dry cleaners to live a richer nightlife. Her first reaction to a cancer diagnosis is being upset about macrobiotic food; she wears plum lipstick, skull and crossbones earrings, and work boots to a wedding. You could, you can, and Muriel did feel unencumbered in her presence.

The only thing that holds Muriel back is her habitual lying, an old survival tactic. What were once fantasies become fabricated pasts; what were dreams develop into a painstaking myopia that she works harder than she realizes to maintain. The actors’ exaggerated expressions and the absurdity of some moments keep this film a comedy, but beneath it is a study in how badly you can spiral out: when you lie enough, when you want enough, you can steal $12,000, fabricate a murderously jealous fiance, hide out in a major metropolitan area, and strike a deal with a hunky yet uninteresting Olympic hopeful swimmer for immigration purposes before coming to. Collette plays Muriel between two distinct poles as if she is struggling to hold back a torrent of giggles (in front of others) and as if she wants nothing more than to be someone else (when alone). Snaking between the two, refusing to garner pity, she has you rooting for her and concerned as to why sometimes.

In truth, this world’s morality is lopsided from the start: Tania, scion of bridal virtue, is mildly touched by her new husband Chuck’s admission that his mistress (one of them) only gives him head out of respect for her. You think Muriel might be bad, but you waiver, almost forget. The people she calls her friends ridicule and abandon her, the residents of Porpoise Spit only approach her to get an inside deal with her politician father, and that father besieges her with insults. Her mother, Betty, has been made absent after years of being ignored; she’s spectral, hanging to the Formica counter in the kitchen until someone calls on her for the third time. Independence, stability, personal fulfillment all seem at your hands when you’re a bride; do what you can to get there.

And everything looks perfect on Muriel’s eventual wedding day. She has deserted Rhonda, now living in a wheelchair (they had to split a section of her spine to remove her tumor), but Muriel is called beautiful. She commands attention and adoration, but she’s too giddy to notice people gawking. She walks down the aisle to “I Do”, her former bullies/friends/pack of conniving jag-offs are now her bridesmaids. Her face is splashed across magazines, but she fails to see her mother near the doors of the church as she exits. It takes a funeral for her to notice her mother again.

Adolescent, disco-hating Patrick would have been disgusted by how fitting ABBA’s “Waterloo” becomes at this point. Muriel feels likes she’s won when she’s lost. She is married, but she is still alone; she’s in Sydney but without someone to enjoy it with. When David asks her “Who marries someone they don’t know?” Muriel answers, “You did.” When he tells her “All his life, [he’s] wanted to win,” she replies, “Me too.” She has risen to her pinnacle, she’s played the game without an afterthought, and she’s waiting for another round that can’t seem to come.

Muriel was stuck in a world characterized by the dominance of men like her father, a man who responds to his wife’s mental breakdown by changing the radio station and walking out on her, who thinks he’s never had his fair chance because his family is beneath him. If put in a similar position, who doesn’t want to scrabble together some hope and scrape their way out? Muriel was hungry for the rebirth she was promised marriage would bring. She readied herself, moved, changed her name to Mariel and altered her style; she was aching underneath everything for the moment she could breathe, comfortable, as a third incarnation, the bride, the success. She ignores the omen her mother embodies: that living purely as someone’s wife can cost you and that your will to live can be drained without you noticing. When the bride becomes the wife, when the wife becomes the husband’s extension, when she finally outgrows that purpose, then what?

After Betty’s suicide, clarity catches up. Muriel takes the vital step of understanding what her ascension meant for others. She navigates back closer to honesty and rebuilds relationships to the point where she needs them to be. She realizes if she needs someone close to her, she needs Rhonda. They cared for each other, helped each other through clean breaks, and lifted each other up through emotional and physical trauma. Their friendship, though shaken, remains; Rhonda is one of the only people to not look at her as a means to an end or an albatross. What Muriel needs is someone who loves her, something she hasn’t had. What she needs is a partner; that could be Rhonda. The best time Muriel’s had in her life was in Sydney, with Rhonda, when she “didn’t listen to one ABBA song because [her] life [was] as good as an ABBA song. It [was] as good as ‘Dancing Queen’.”