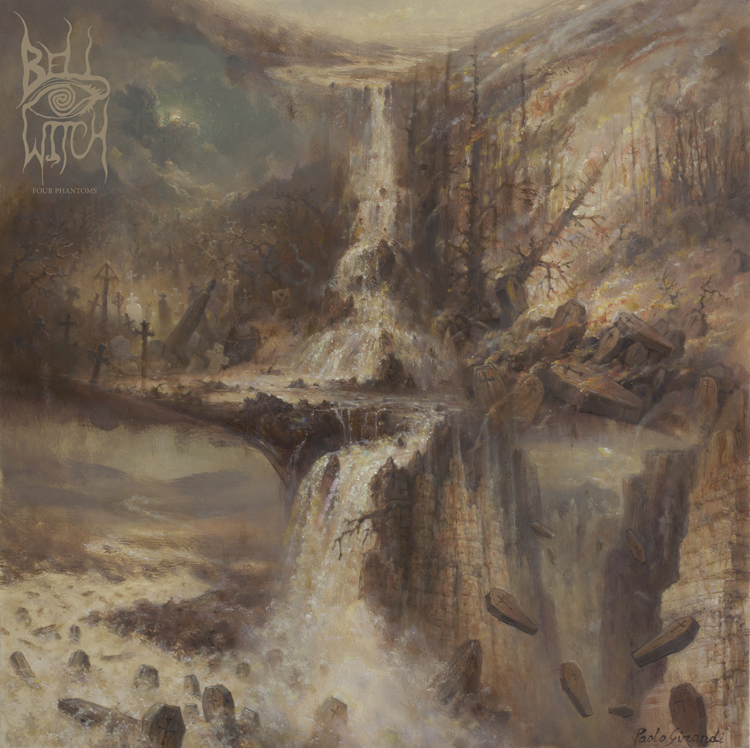 Several things will happen when you listen to the opening track of Four Phantoms, the latest work of Seattle funeral doom duo Bell Witch. Your neck will get weak and your head will hang low in reverence. Your spine will tingle as a chill takes hold, and you’ll feel what seems like cold fingers up and down your back. Any comfort or rest you may find in the quiet spaces will soon be betrayed by bassist Dylan Desmond’s sorrowful chords and drummer Adrian Guerra’s monolithically slow tempo. And it’ll be there, in the relentless dirge and mournful howling, that you’ll feel a presence.

Four Phantoms is an anthology of hauntings. Its songs all act as soliloquies from four individual spirits eternally trapped and tortured by the four main elements: earth, fire, water, and air, featured in order. With no track coming in at under 10 minutes and two even clocking in at twice that, there is plenty of time within each to become completely enveloped in the purgatorial atmosphere. Each spirit’s longing is as mournful as the last, and in true Dickensian form, there hardly lies a wait between their respective visitations.

Concept albums like these are not uncommon for funeral doom. Last year, Bell Witch’s Finnish counterparts, Profetus, released the encompassing As All Seasons Die, also a four-part album, which reflected despairingly upon each season of the year. Like that album, Four Phantoms draws strength from its use of repetition and motif, often revisiting riffs over and over. A marvel it is, though, that while many of their peers create such trademark despondency with four or five band members, Desmond and Guerra are just as proficient as a duo.

Produced by Billy Anderson, who last year brought us Pallbearer’s Foundations of Burden, an equally brilliant and dynamic work of doom, Four Phantoms leaves a lasting impression down deep in your psyche. For those of us who have never experienced an encounter with the paranormal, this album has got to be the next best thing.