Marina and the Diamonds – FROOT 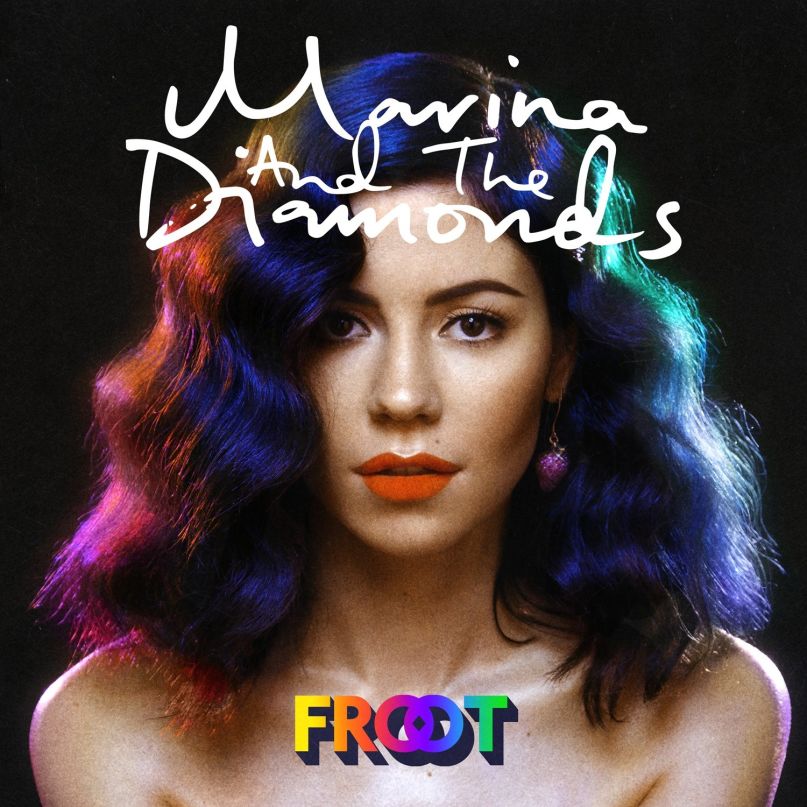 Electra Heart has died. The alter ego of Marina Diamandis (aka Marina and the Diamonds) on her 2012 sophomore release, Electra Heart, was an airhead pop star who represented pop culture in its bleakest throes. On her third album, FROOT, the Welsh singer-songwriter ditches K-pop twists and glittery hearts in favor of revealing her true self, penning every song herself and only bringing one co-producer, David Kosten, on board. Unfortunately, the album is loose around the edges, hanging like an ill-fitting suit that gets increasingly monochromatic with age. She’s stepped out of Electra Heart’s tight skin, but Diamandis doesn’t command her own with much authority.

Turns out she’s as emotionally frivolous as the rest of us, although FROOT communicates that a little too well. Jumping from intense outpours to cheeky pop, it’s an album of songs meant to be cherry-picked and passed on, not listened to as a whole. Delicate opener “Happy” sees Diamandis stepping out of depression and into a world gleaming with acoustic verses and piano cushioning. It’s the sort of confessional often found as a record’s closing track, but Diamandis prefers to tell that final page first. Once it’s out of the way, she parades into ballad territory instead of the sassy pop hits that led to her rise in fame.

The album’s title track is the first of many to let her pearly whites speak slower. Thick funk bass takes the lead, rushing forward into electropop as Diamandis gives herself up with ease, singing, “I’ve been saving all my summers for you” as a ripe fruit for anyone, and possibly everyone, to pick. It’s followed by the album’s best songs, the ‘80s jam “I’m a Ruin” and the glossy, upbeat “Blue”. All three join together in the most cohesive unit of the album, rolling out like the carefree background music at a Saturday night roller rink. Marina and the Diamonds did charming pop well with “Primadonna” and “How to Be a Heartbreaker”. These new songs may take it down a notch, but dramatics trade well for honesty this time around.

The rest of the record, though, begins to lag. Despite its uplifting chord progression, “Forget”, one of the quicker numbers on the album, drags on. So do heavy-handed lyrics about recurring relationships on “Weeds” or the semi-aquatic blubbering of “Solitaire”. They create the same sensation as having water stuck in the ears — a discomfort too minor to reasonably complain about, but noticeable enough to blur the sounds around you.

Even her fear of dying in “Immortal” gets undermined as she slights the topic’s gravity. Instead of an airy rumination on the universality of death that everyone ponders at some point — from the rising superstar to her tween fans to the mothers driving them to school with this very album blasting — the song comes across as thinly-veiled humor. “Everybody dies” works best not in a chorus like this one, but when sung with a heightened awareness of the fear it instills.

There’s a difference between writing fiction and nonfiction. Baring yourself both honestly and entertainingly is often a harder struggle than detailing the life of a character. Diamandis is writing nonfiction for herself here, which in and of itself is not a crime. Self-indulgence can lead to vivid, valiant, emotive music. But Diamandis misplaces her intent. She has left the album’s core spirit so open-ended that most songs end with no aftertaste. They’re digestible and entertaining only in the moment. Once the next track begins, it’s hard to recall a lyric or chorus that came before it, and the result is an album that grows boring, albeit filling, by the time it reaches its end.