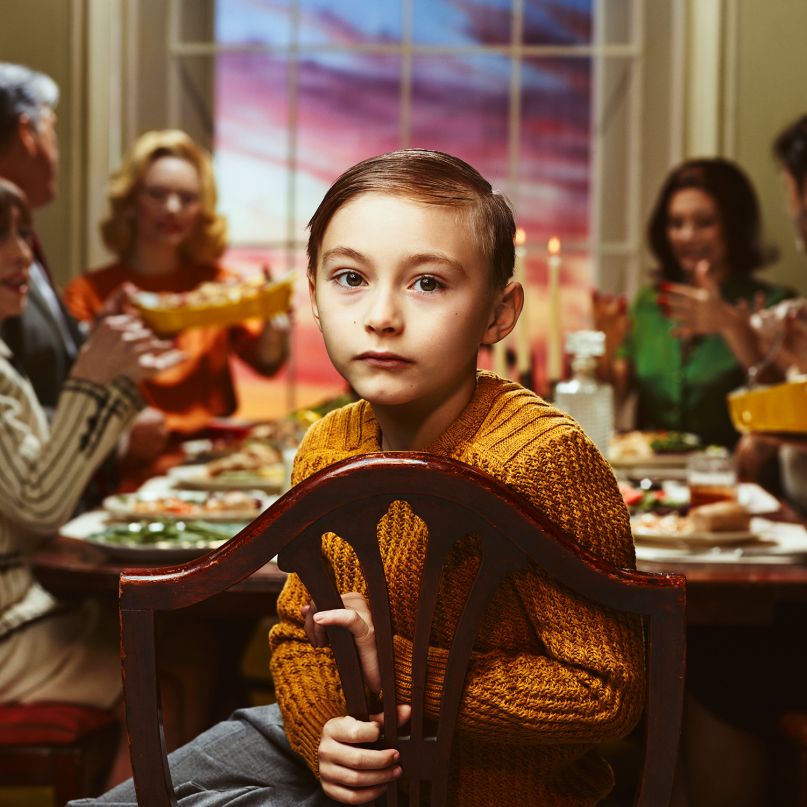 Since a tell-all 2012 Pitchfork cover story, Michael Angelakos’ struggles with bipolar disorder have been well documented. Recently, the Passion Pit frontman joined forces with nonprofit Bring Change 2 Mind to help lead a campaign that aims to destigmatize mental health issues. Angelakos’ growth into an advocate for the community of people who struggle with mental illness reflects his headspace on Kindred, which showcases the singer beginning to overcome his past trials and tribulations. As the saying goes, “the darkest hour is just before the dawn” — and here, the first rays of light seem to peek from beyond the horizon.

From the title forward, family plays a crucial role on Kindred. Throughout the concise 10-track effort, Angelakos alternates between expressing gratitude (“Lifted Up (1985)”) and apologizing (“Whole Life Story”) to those closest to him. According to a recent interview, Angelakos has made a clean break with past bandmates and will pick up a new touring group for upcoming shows. Since Passion Pit’s last record, 2012’s Gossamer, Angelakos also married his longtime girlfriend. Speaking about his wife and assistant in that interview, Angelakos said, “These are the people who help me make sure I’m able to record and work while I’m touring and also maintain my mental health.”

Angelakos’ wife serves as the inspiration for much of the record, including the bubbly opener “Lifted Up (1985)”. Here, Angelakos characterizes her as an angelic figure who gave meaning to his life. As with many Passion Pit songs, this one masks dark thoughts with a pulsing beat and a catchy hook. With lines like “How many days went to waste/ Now the rain and the thunder are clashing” and “I fight so hard and come back beaten,” Angelakos acknowledges that his past struggles are tempered by the realization that “the sun’s got a smile ‘cross the face.” On Gossamer, Angelakos would often describe how he’s liable to let down those around him; Kindred shows that his dedication to his wife constantly pushes him to maintain a healthy mental outlook.

Clocking in at just under 36 minutes, Kindred is easily the most consistent and thematically focused Passion Pit record to date. Gone are lyrically ambitious oddballs like “Take a Walk”. Instead, Angelakos employs various dichotomies, such as light versus darkness (two sides of the same coin) or running to escape versus running to move forward. In fact, imagery of light (the sun, warmth) surpassing darkness (the moon, storms, rain) peppers the album and gives it a narrative arc: The day-night juxtaposition reflects the manic and depressive periods associated with bipolar disorder. Angelakos proves that a simple idea can effectively illustrate his illness, as he repurposes the “Rain Rain Go Away” nursery rhyme on the dreamy “Looks Like Rain”. Sure, there may be dark clouds overhead on a dreary day, but the water ensures new life can grow.

Sonically and lyrically, early single “Until We Can’t (Let’s Go)” is the album’s strongest offering, with an irrepressible energy that matches past singles like “Take a Walk” and “Carried Away”. Taken at face value, the song’s narrative of buying a house is relatively simple. But for Angelakos, who once said he didn’t envision himself “living very long,” picking out a home has weighty connotations: settling down, having kids, and embracing getting older. On another level, feeling the urge to “break down the confines of these rooms” represents the spectrum of Angelakos’ mind.

For its cohesiveness and brevity, Kindred still very much sounds like Passion Pit’s previous material, hand claps, snaps, and all. Minor flourishes like the dreamy harp on “Looks Like Rain” add some variation, but for the most part the evolution on Kindred can be found in the lyrics rather than the instrumentals. One misstep takes place on final track “Ten Feet Tall (II)”, which sees Angelakos employ garbled Auto-Tune. It’s a jarring shift, especially since Angelakos shows off his high-pitched falsetto on the previous nine tracks. The distorted words also distract from the interesting link between “Five Foot Ten (I)” and “Ten Feet Tall (II)”. Where the former draws inspiration from Angelakos’ inability to be completely honest about his height — and also realizing his own limitations — the latter focuses on Angelakos reflecting on the progress he’s made.

One of the great pleasures of Passion Pit is feeling the greater impact of the lyrics across repeat listens. It’s easy to get caught up in the saccharine beats and hooks, but Angelakos has once again succeeded in making a powerful and accessible pop record about his deeply personal experiences.