The Mountain Goats – Beat the Champ 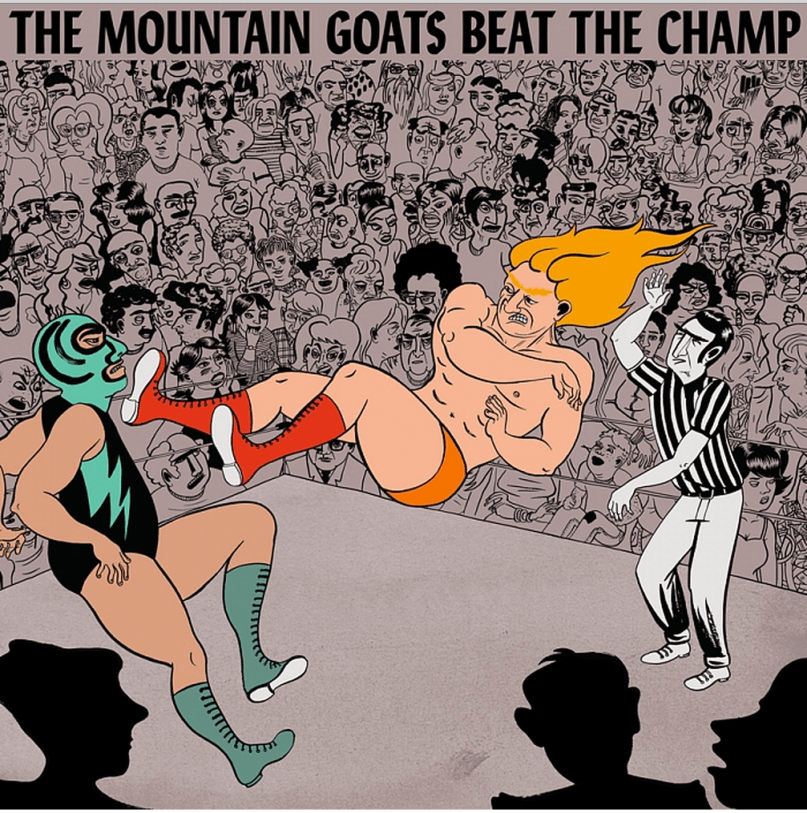 Wrestling must be the envy of all professional sports. Not even the NFL, which is nearing $10 billion in annual revenue, enjoys such profound control over its narratives. The insular reality upheld by wrestling’s meticulously scripted matches and storylines is so unique that it merits its own word: kayfabe. Sure, other sports may serendipitously stumble upon a heel like the Bad Boys Pistons or the Broad Street Bullies, but wrestling has heels and heroes ingrained into its DNA. Anyone who’s reveled in the chaos of WrestleMania knows that it isn’t just wrestling’s Super Bowl; it’s a pay-per-view trip to an entirely different universe, one with its own rules of physics and notions of justice.

Priggish intellectuals would do well to remember this the next time they’re tempted to dismiss wrestling as the province of brutes. Wrestling is, in fact, a literary goldmine, both within and without the bulwark of kayfabe. So, it’s fitting that, fresh off the publication of his first novel, Wolf in White Van, John Darnielle of the Mountain Goats would turn to wrestling and find something worth writing about. Using snapshots from his own youth as a guide, Darnielle has produced Beat the Champ, an ambitious concept album that speaks to wrestling’s potency as an avenue of escape from life’s harsher (if less violent) realities.

“I wrote these songs to re-immerse myself in the blood and fire of the visions that spoke to me as a child,” Darnielle writes, “and to see what more there might be in them now that I’m grown.” The “what more,” it turns out, is what makes Beat the Champ the most lyrically compelling Mountain Goats album since 2005’s The Sunset Tree, which chronicled Darnielle’s relationship with his deceased stepfather. Echoes of that troubled relationship reappear on “The Legend of Chavo Guerrero”, a song dedicated to the Mexican-American wrestler who loomed large in Darnielle’s youth as a father figure in absentia. “You called him names to try to get beneath my skin/ Now your ashes are scattered on the wind,” sings Darnielle, his voice tinged with bitter satisfaction. Earlier, in the song’s second verse, he distills the allure of wrestling into six neat words: “I need justice in my life.”

The rest of Beat the Champ is less autobiographical. Darnielle has always been a storyteller first and a musician second, and his impulses lead him to burrow inside the wrestlers’ minds more often than his own. Album opener “Southwest Territory” hearkens back to Get Lonely’s “Wild Sage”, with a narrator who is similarly lost and struggling to relate. Traveling home from a match late at night, he quietly reflects on the violence and voyeurism that govern his day-to-day life. The spare, piano-heavy composition is meant to reflect a fragile psyche, though one that can still find the humor in a self-deprecating pun like “black out for local TV.”

An undercurrent of cynicism flows throughout Beat the Champ, but the songs themselves reflect wrestling’s highest highs as well as its lowest lows. “Foreign Object” is a fun, brassy romp that revels in ultraviolence and regrets nothing (“If you can’t beat ’em, make ’em bleed like pigs!” shouts Darnielle gleefully). “Choked Out” also captures the raw thrills of Raw, though the song’s frantic pace seems intended to drown out something sinister. In the midst of a heated match, the speaker glimpses his future through bloodied eyes and admits that, yes, “it’s a real dark place.”

Beat the Champ arrives at an interesting moment in sports history. In the past year alone, brain damage has scandalized football and performance-enhancing drugs have continued to chip away at baseball’s sacred edifice. Darnielle embodies and exemplifies the ambivalence of today’s fans, who seem less complacent than their predecessors, less willing to ignore the darker corners of their favorite pastimes. Beat the Champ is strongest when he follows wrestling’s narratives beyond the ring. “Heel Turn 2” marks the turning point in the album’s arc, and it’s the most devastating song of the bunch. Time slows to a crawl as a wrestler describes his “turn” from face to heel, from hero to villain. The song’s genius lies in its ambiguity; when we don’t know what’s a metaphor and what isn’t, the repeated plea of “I don’t want to die in here” becomes all the more effective.

Darnielle often projects his own ambivalence onto the wrestlers he writes about, humanizing them in ways that few have ever bothered to. He sets his sights beyond the bright lights and squarely on the “nameless bodies in unremembered rooms,” following in the tradition of Darren Aronovsky’s The Wrestler. If there’s a problem with this approach, it rests in the limitations of the four-minute song. Beat the Champ is a record of glimpses, the composite of which allows us to empathize with the wrestlers but never really get to know them. Of course, it’s debatable how well these wrestlers really know themselves; “Unmasked!” isn’t named for an event that takes place in the ring, but for one that takes place “alone before a mirror, late at night.”

Though Beat the Champ is notable among Mountain Goats records for its lush production and wide range of sounds, it’s fitting that the album’s final track, “Hair Match”, strips most of this away. Darnielle reassumes the role of speaker, singing again to one of his childhood heroes. The wrestler has just suffered a humiliating defeat in a hair match, a contest in which the loser is shaved bald in front of the audience. As the razor, held aloft, glistens in the spotlight, Darnielle offers his parting words: “I loved you before I even ever knew what love was like.” It’s an epitaph for innocence — for fire and blood, gods and titans, rhyme and reason, the poetry and perfection of a squared circle.