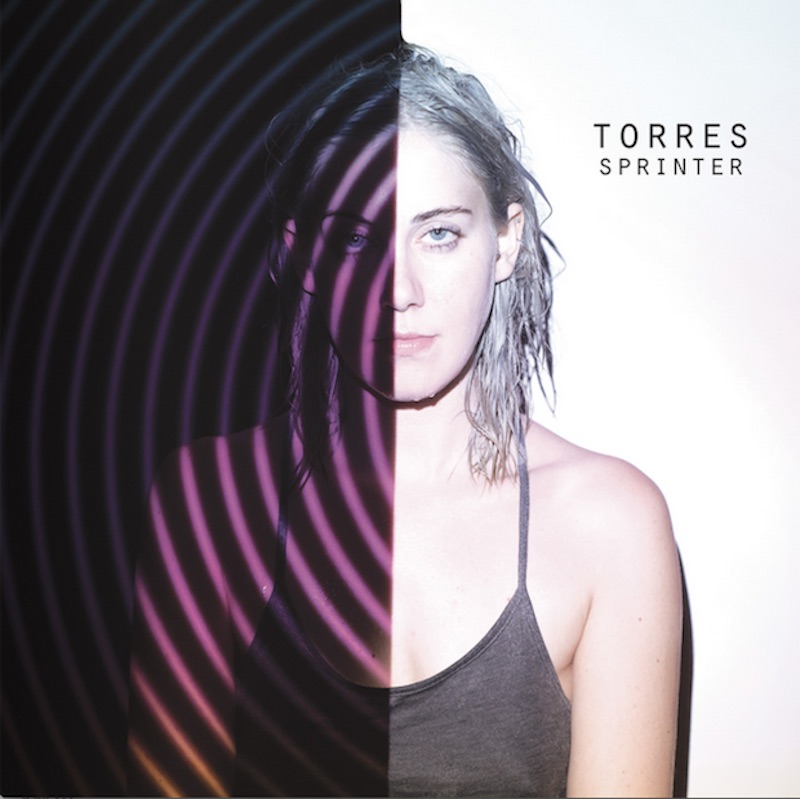 “Strange Hellos”, the lead song on Torres’ sophomore album, Sprinter, is bookended by two distinct lyrical wonders. The first is the album’s opening, where the Georgia native, former Nashville resident, and current Brooklyn artist gives her own awkward greeting: “Heather, I’m sorry that your mother/ Diseased in the brain/ Cannot recall your name/ Heather, I dreamt that I forgave/ But that only comes in waves/I hate you all the same.”

It’s abrupt and dark, and alongside the later lyric “strange hellos are not my bag,” it can even be taken with an embedded sense of humor. But it also serves as window dressing to the song’s center, the deep-cutting refrain where Mackenzie Scott exclaims, “I was all for being real/ But if I don’t believe, then no one will/ What’s mine isn’t really yours/ But I hope you find what you’re looking for.” The lines could be seen as a mantra, or as a pre-emptive defense for an album that never shies from the deeply personal and often moving details of Scott’s own experiences.

Scott’s point of view, like her strange hello, shouldn’t need defending, but we get a glimpse into her artistic stance, and it taps into the pulse of what makes her music affecting in the first place. Whether or not the album is confessional, which Ann Powers spoke to in her recent NPR summary, isn’t really as important as whether the songs are believable. And Scott is wise to know that if anyone needs to believe in the emotion she unleashes over these nine tracks, it is herself. Each chorus on “Strange Hellos” intensifies until she sounds ferocious, threatening to swallow the audience whole with her conviction. It’s a powerful start to an album where power is par for the course.

Musically or technically, Torres isn’t trying to break new ground on Sprinter. The record places its weight on lyrics, songwriting, and the emotion in Scott’s voice. “Cowboy Guilt” is playful in its ambition, coming off like a bedroom St. Vincent, while “The Exchange”, a nearly eight-minute emotional stunner, makes as much use of Scott’s fingers sliding on the guitar strings and birds chirping in the background as it does out of the actual notes she strums. As her acoustic gets louder by the song’s end, all ears train on her quivering voice, unsure if she is breaking down or lashing out. Either way, there is no a question as to whether everyone will believe what they hear. The question is more if the listener is ready to go to the same dark and lonely places that Scott wants to take us. When she sings “I’m underwater,” drowning along with her isn’t a choice, but an inevitability.

But the joy of listening to Torres — and there is a lot of joy — is in her words, her melodies, and the fire she breathes when she sings. The achievement that is Sprinter should surprise no one considering the acclaim for her debut LP in 2013, but the fact that a virtual masterpiece came so soon afterwards is still worth recognizing. Scott is only 24, but she writes with the courage of someone much older. She is already willing to bear the wisdom and insight that comes from her Southern Baptist roots — and from leaving them behind.

“New Skin” finds her moving between lives, between who she is expected to be in different worlds. “Who is that speaking for me?” she asks, only to conclude that it’s “a child of God, just like yourself.“ Moments later, Scott is firm in her identity: “I am a tired woman,” she proclaims. The music doesn’t spring from weariness, but a clear-eyed space where Scott is confident and uncompromising. She’s again “wide-eyed” on the excellent “The Harshest Light”, stepping into the glare in all its fervor, while the title track finds her running from the past, given the excuse to abandon her religious upbringing by a perverted pastor.

Leaving the past behind is difficult for Scott, and she notes that “there’s freedom to and freedom from.” When tasked with the choice between darkness and light, she chooses the sun. “Cowboy Guilt” also sees her coming to terms with her origins, but through a more sharp-witted lens. The humor in the details comes full circle and makes “Ferris Wheel” feel self-referential when she claims “you hide behind … music and wit.” The song’s object is a lover she never had, in whom she sees a lot of herself, whom she desires greatly to relate to, to experience. The same things she admires in another could easily be the things the listener admires in her. “There is nothing in this world that I wouldn’t do/ To show you that I’ve got the sadness, too,” she repeats in the album’s most lovelorn and heartbreaking moment. She fails to show the song’s object her sadness, but she succeeds in illuminating what makes her so special as an artist.

The album’s density makes her earlier disclaimer “what’s mine isn’t really yours” ring all the more true. At times, Torres does hit on universal concepts of alienation and hope and beauty and faith, but at others she stays very much in her own world. The track and field metaphor found in the title is the unspoken realization that life isn’t a 50 yard dash, but, for most of us, a marathon. It goes in circles; it isn’t simply a sprint between two points.

This wisdom comes through most vividly in a couple of spare lines. On “A Proper Polish Welcome”, featuring Scott’s most technically impressive vocals, she sings about “rocking and holy, we came two by two,” like animals moving to an ark to escape a great flood. But Scott doesn’t long for this safety. “I wish I was the sea,” she sings. Later, she admits, “I don’t mind the way it feels/ To ride an empty ferris wheel.” Life has grown more complicated than running to or running from, and as Torres, Scott is better equipped than ever to shed light on the details.

Previous Story
Remake This! The Punisher
Next Story
Tame Impala’s Kevin Parker: “For me the value of music is the value you extract from it”
Popular
More Stories
[fu-upload-form form_layout="media" title="Submit Your Photo"][input type="hidden" name="ugc" value="1"][/fu-upload-form]