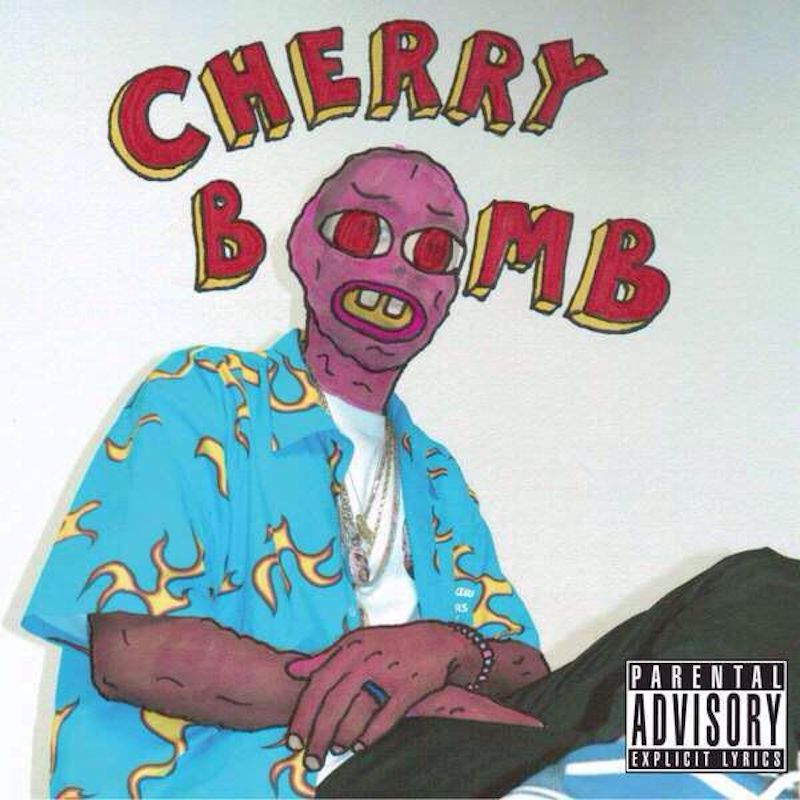 Even if they seemed to come out of nowhere, one good look at Tyler, the Creator and the rest of hip-hop collective Odd Future Wolf Gang Kill Them All let you know they wouldn’t be a secret for long. If you could get past the devilish vulgarity, it was easy to see a legitimate creative core inside the madness. There was plenty of skepticism of their actual talent level and potential for longevity, but we’re now more than five years removed from Tyler’s Bastard. He’s 24 now, and he’s still very much a big deal — maybe bigger than ever. Most of all, with Cherry Bomb, his fourth full-length, he’s doing what he can to keep Odd Future from being placed into a box.

The self-produced album arrives less than a month after I Don’t Like Shit, I Don’t Go Outside, the minimal, introverted new release from Odd Future compatriot Earl Sweatshirt. The two projects could hardly be more different. Unlike Earl, Tyler doesn’t seem very interested in making a great rap album. He’s more interested in making a great album with a bubbly, wide-ranging musicality. Veteran artists like Roy Ayers, Charlie Wilson, and Leon Ware all make cameos on Cherry Bomb, and the album is peppered with live instrumentation, including a string section on “2SEATER” that was recorded at Hans Zimmer’s studio.

All of that means Tyler’s experimentation sometimes rubs up against the relatively predictable rest of the rap world. ScHoolboy Q, Kanye West, Lil Wayne, and Pharrell all contribute bars to Cherry Bomb (in that order, though Pharrell is an influence throughout), but with respect to their individual strengths, that fact alone could lead onlookers to believe this is a fairly neat and tidy collection of songs. Instead, it’s an album defined by contrasts: Noisy convulsions pile up alongside jazz and soul grooves, poppy melodies are offset by intentionally muddy mixing elsewhere, and Tyler’s foreboding growl is occasionally rendered cartoonish via effects. At 54 minutes, Cherry Bomb is noticeably shorter than 2011’s Goblin and 2013’s Wolf, but it seems to pack more musical ideas between its seams than the two combined.

The album’s volatility can be both thrilling and frustrating. As soon as you hear something you like, you’re bound to encounter an abrupt shift shortly after. After the more chaotic first four songs, the blooming orchestration of the rap-less “FIND YOUR WINGS” represents the first major changeup here. It’s just a tease, though, because next comes the demonic, Death Grips-esque “CHERRY BOMB”. After a while, it starts to feel like Tyler came up with a checklist of sounds he wanted to include on the album regardless of the results. Songs like “2SEATER” and “FUCKING YOUNG / PERFECT” (both of which run nearly seven minutes) are beautiful to behold, full of bright, relaxing chord progressions. But, mostly, the album tests the listener’s patience, which is the best and worst thing about it. Tyler is eager to show off his impressive versatility, but the disjointedness makes this anything but a smooth listen.

While Tyler has never seemed more opposed to making straightforward rap music, there’s some of that here, too. Despite the absurd title, “THE BROWN STAINS OF DARKEESE LATIFAH PART 6-12 (REMIX)” is one of the most straightforward — and best — songs on the album, featuring a snarling ScHoolboy Q and a riot-starting beat. Then there’s the breezy jazz of “SMUCKERS”, which showcases Yeezy and Weezy in vintage form. The song comes together more cohesively than you might expect from the three very different artists, and, suddenly, the restless Tyler sounds content to be a famous rapper. It’s a better fit than he might think: Though his subject matter varies, his most effective lines on these songs and others tend to be outright provocations, like “Put that fuckin’ cow on my level ’cause I’m raisin’ the stakes” or “I kill the dark shit like I’m motherfucking Zimmerman.”

If there’s a song here that encapsulates the breadth of the album (and there really isn’t, but let’s try), it’s the Pharrell-featuring “KEEP DA O’S”, where a pair of bona fide rap verses are manipulated to martian effect and a doo-wop break leads to a geyser of melodies calling back to “FIND YOUR WINGS”. Like Cherry Bomb as a whole, the song is all over the place, doing away with traditional perceptions about what “songwriting” means. After the reductive response to Odd Future five years ago (they were “shock rap,” they were “horrorcore”), it’s hard to blame Tyler for indulging his whims. These songs work best when you throw out your own ideas about where they should go.