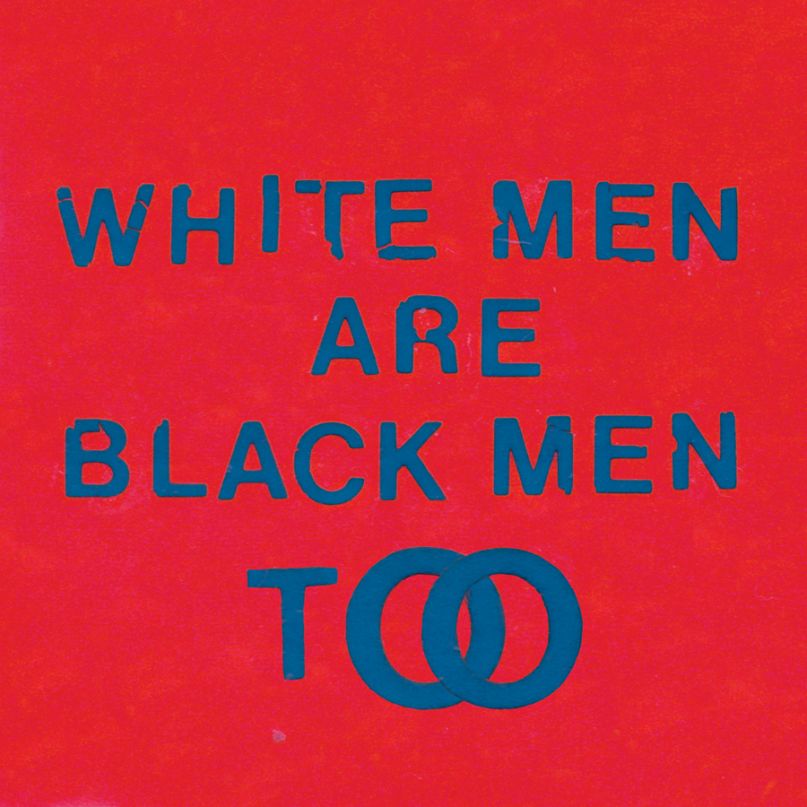 Listening to Young Fathers triggers an outlaw rush akin to discovering low-frequency pirate radio transmissions from the future. Simultaneously familiar and foreign, the Edinburgh-based trio melt throbbing dub and roots reggae, righteously angry punk refrains, West African polyrhythms, and soulful R&B crooning into a floating miasma of trip-hop production. With no regard for context or decorum, Young Fathers mix and mash disparate elements with such youthful abandon that they tread a line between orgiastic homage and focused synthesis.

Young Fathers’ last album, Dead, shocked many by winning the 2014 Mercury Prize. White Men Are Black Men Too represents the band’s return to the studio following the sudden groundswell of international interest. The stakes, then, are high; Young Fathers stand at the precipice of striding in success or tumbling back into obscurity.

The album starts slowly, the first standout appearing four tracks deep. “27” offers a fine example of the dual vocal acrobatics of Alloysious Massaquoi and Kayus Bankole, as they trade lines, tempos, and harmony with practiced ease. Follow-up “Rain or Shine” is the album’s first overt good time, as swinging organ and percussion set a deep and satisfying groove. The latter half of the album feels much stronger, with highlights including the exemplary “Nest”, where strings and choral harmonies elevate Massaquoi’s melodic skills.

Young Fathers’ lyrics have always been strong, but few instant slogans rise out of the mix on White Men. Album opener “Still Running” fades out to the line “tonight I don’t love God,” which flirts with poignancy but is ultimately difficult to center. “Liberated” and “Old Rock n Roll” take a more directly political approach. The latter offers the line from which the album takes its name, alongside defiant expressions of black identity, while the song’s closing cacophony sounds like an alarm clock aimed at waking a sleeping collective consciousness.

The band fails to make a significant statement of their immediate necessity with this sophomore effort. Too much fluff surrounds the high points and the vintage fuzz aesthetic threatens to cloud up the entire record. The strongest tracks never eclipse the highlights of Dead, but the band’s almost careless experimentation remains their strongest attribute. Every song has surprising twists and turns, sometimes resulting in euphoric triumphs out of the chaos. Those moments establish Young Fathers as a band to watch, though they’ve likely got more growth in store.