Plus, read a Q&A with Lukens and the producer of his forthcoming LP, Spoon's Jim Eno 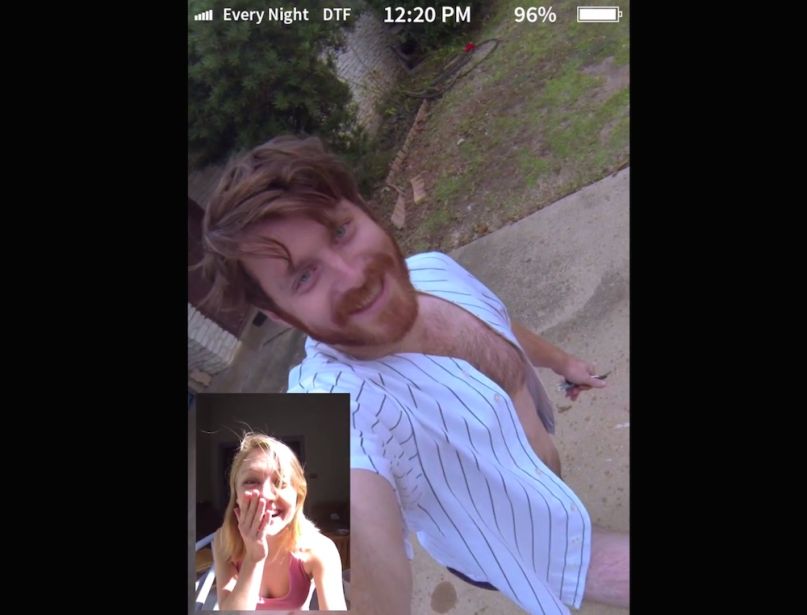 Singer-songwriter Walker Lukens took the world by storm with his 2013 debut album, Devoted, an ambitious collection of tracks that ran the gamut of soul, R&B, indie rock, and even piano-led balladry. For his sophomore effort, delectably titled Baked Goods and due out sometime this year, Lukens is looking to expand his already vast and flavorful scope further. To help in the kitchen, he’s enlisted the producing talents of fellow Austin native Jim Eno, drummer of Spoon and producer for the likes of Phosphorescent, Turbo Fruits, and Poliça.

Earlier this year, we got our first taste of the Goods with the groovy, snap-tastic single “Every Night”. Today, we take a closer look into the mind of Chef Lukens with the song’s accompanying visual. And oh, what a mind he has! At once dark and hilarious, the clip is made up of a series of FaceTime videos between Lukens and his girlfriend. Although their virtual interactions start off innocent enough, it’s not long before he witnesses some pretty crazy stuff.

In addition to the music video, both Lukens and Eno were kind enough to give us an inside look at the new album, including what fans can expect to hear and the kind of studio techniques used during the recording process (hint: a couple of Tecates were involved). Read on in the Q&A below.

How did you two come to cross paths?

Jim Eno (JE): I was driving around Austin listening to KUT. I Shazam’d a song that I hadn’t heard before and it was Walker. I bought the record Devoted and would listen to it all the time. I was struck by the strong song writing and interesting production approaches on the record. Then I heard “Every Night” and it was all over.

Walker Lukens (WL): I got a text from a mutual friend saying that she’d run into Jim at a bar, that he’d been listening to Devoted and that I should come and meet him. Austin is, for all intents and purposes, a small town. I happened to be a few blocks away so I walked over. Emails are exchanged. Studios are visited. Spoon records, releases an album, and tours. About a year or so later, I send him a demo for “Every Night.” A couple of months later we recorded it.

You both have differing musical backgrounds, so what led to you guys finally deciding, “Hey, let’s cook up some Baked Goods together”? How different and/or similar is the result from Devoted? Lyrically, production-wise, and so forth.

WL: Jim once told me he likes U2. Other than that, I don’t know that our backgrounds are really so different. We both like a lot of music and the things we’ve been referencing are all over the place. I never cared much for ZZ Top, but recently I’ve been really into their mid-70s records: Tres Hombres, Tejas, Deguello, El Loco. To some extent, this record is me trying to get the same off-the-cuff, fun feeling out of my own writing. You could maybe say that Devoted is adventurous, but it’s not very fun. I really wanted to make an album that was fun but not dumb.

JE: Early U2 … Anyway, I like making records that are fun. I wouldn’t be spending so much time in the studio if it weren’t fun. I love how when you hear a song you can tell the band was having a blast in the studio. Listen to the female gang vocals on “Every Night” … that was fun.

“Every Night” seems to draw from an array of influences — Spoon included! Was there any particular “sound” you guys were aiming for when you hit the studio? Or artists you looked to for inspiration?

WL: Every time I suggest something that I consider “Spoon-y” for one of the songs, he’ll have an idea that fits better and is more unique. It really screws up my plan to make Kill The Moonlight again. Any residual Spoon-vibes on this track probably come from me being a fan, more than anything else. All that being said, Jim is playing tambourine on it … I think we probably connected over this song because we both like a lot of late sixties R&B and rock.

JE: I like to use references in the studio. We are constantly pulling up songs to draw inspiration from. But overall, we are trying to make each song the best it can be and stand on it’s own. So while we may have some idea where the song is going, it is always an unplanned and exciting process.

Jim, you’ve worked with a long list of varied musicians, including Turbo Fruits, Poliça, and Tennis, and of course Spoon. What was your approach towards Walker Lukens’ music? What specific techniques did you use?

JE: The direction we go is always based on the song. But if I look back at what we have been doing, it feels like we have consistently used distortion, chaos, space, delays of delays, and anything weird that comes to mind. But that being said, we do not hesitate to throw something out if it doesn’t fit the song.

Can we expect any other familiar faces to be present on the new album? Any guests in the mix?

WL: Two of the guys from Grupo Fantasma/Brownout [who’ve backed Prince several times] laid down some tracks the other week.

JE: I usually add some tambo after a couple of Tecates.

You can catch Walker Lukens on tour at the following dates, which include a four-night residency at New York City’s Bowery Electric: