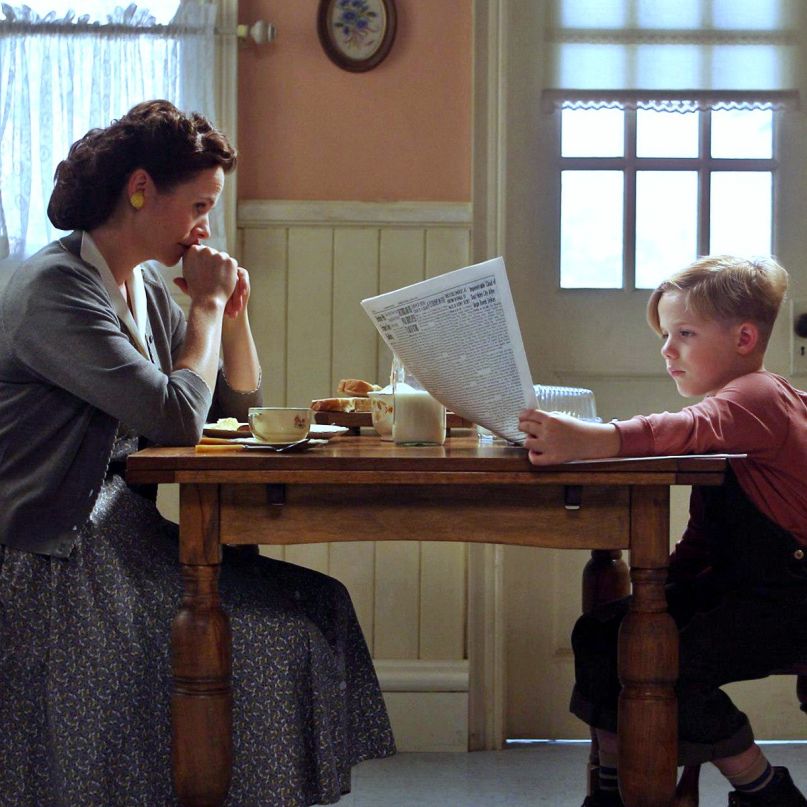 By the time I resolved to count how often the word “believe” popped up in the dialogue of Little Boy, I had already let a couple dozen slip by. I can’t be blamed for giving Little Boy the benefit of the doubt, even if the very concept of doubt exists somewhere far outside the film’s vocabulary. This is an astoundingly stupid film, though it’s one whose stupidity sneaks up on you in slow and increasingly painful increments, like the dawning realization that you married the wrong person.

Little Boy starts out charmingly enough, landing us in the fictional town of O’Hare, California, a sleepy hamlet that looks as if it were vomited out of a Norman Rockwell painting. The time is the early 1940s, and America’s war with Japan seems to be all anyone can talk about. Anyone, that is, except for tiny seven-year-old Pepper Busbee (Jakob Salvati) and his father James (Michael Rapaport), who spend their days recreating the exploits of a crime-fighting magician named Ben Eagle. The film squeezes every ounce of good will it can out of Salvati’s cuteness early on, making sight gags out of his diminutive stature that sent several audience members around me into fits of cooing laughter. Little did those poor souls know the punishment that awaited them. The laughter stayed fairly consistent as Little Boy went on, but its tone became derisive as the film took a nosedive into the realm of maudlin sentimentality.

The real plot of Little Boy begins when James is sent off to war in place of his eldest son, London (David Henrie), whose flat feet render him incapable of service. Plenty of crying ensues, and more follows when James is taken as a prisoner of war during a botched raid in the Philippines. Pepper is left at home to be mercilessly picked on by the town bully and watch helplessly as Kevin James, looking as punchable as ever with a thin mustache, puts the moves on his mom.

Pepper’s only salvation is the notion that he might have magical powers, discovered when he “moves” a glass bottle with his mind at a live Ben Eagle show. The local priest (Tom Wilkinson) squashes that notion and instead gives Pepper a list of the Corporal Works of Mercy, leading him to believe that fulfilling all seven might bring his dad back home. Most of them revolve around being nice to the town’s token Japanese resident, Hashimoto (Cary-Hiroyuki Tagawa), whom everyone else treats slightly worse than scum. Hey, if not being a horrible racist also serves the purpose of bringing daddy home, I suppose it can’t hurt! These and other bizarre moral lessons are brought to you by the same producers of Son of God and The Bible miniseries, whose vision of faith is about as nuanced as their seven-year-old protagonist’s. The stun guns here are set to “convert,” and they make loud, obnoxious noises every time a hint of earnest storytelling threatens to peek through.

If you are now or ever were a fastidious churchgoer, you’ve likely encountered a preacher who, for all of his charisma and visual panache, just doesn’t know when to shut up. Little Boy is that preacher. I was astounded to learn that the film’s running time is a mere 106 minutes, as its blunt message of “believe, believe, believe” is repeated often enough to turn a sane person toward Satan. The film’s moral compass is scrubbed so clean that its few graphic depictions of wartime violence seem weirdly brutal and out of place. Not that I would call this a kid’s movie, as that would be insulting to the intelligence of kids everywhere, but such depictions add more weight to the question of “what, exactly, were these filmmakers thinking?”

Sure, everybody loves an underdog, but nobody needs to sit through a schlocky, overwrought retelling of David and Goliath. Even the winningly cute Salvati becomes a pestilence by the film’s end, thanks to the unbearable grunts and screams he makes every time he attempts to conjure his magic. It’s only slightly better than listening to a banshee scrape its teeth across a chalkboard. Pair that sound with an ending that makes Nicholas Sparks look like a purveyor of gritty realism, and what do we have? A confused mess of Christian morality parading as entertainment, and one that no benevolent God would wish upon the world.