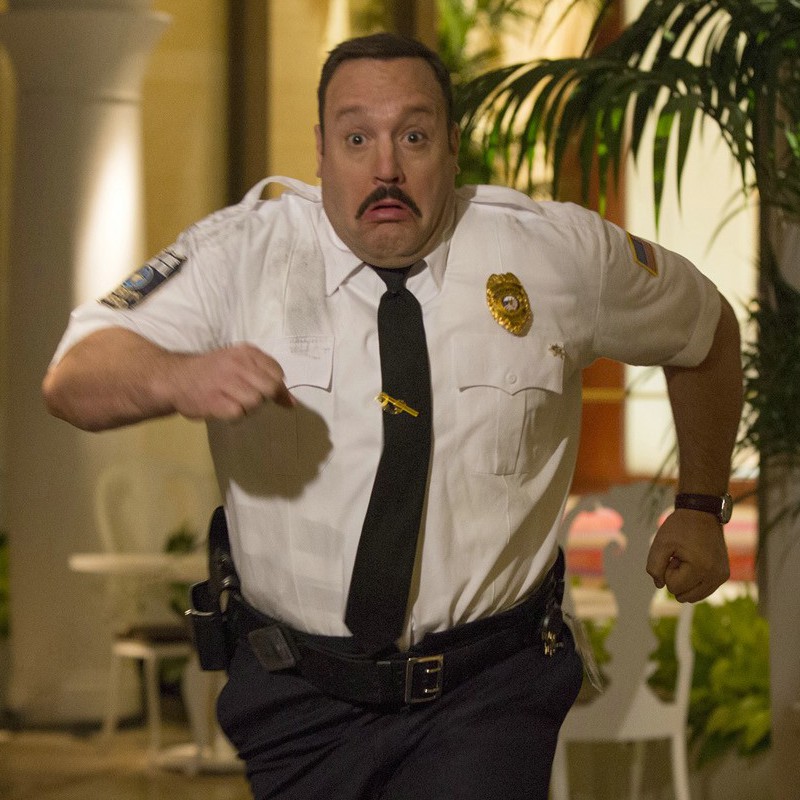 Forgive me, but this is going to be a pain in the ass.

Some critics love to brag and boast about how terrible a film is, like it’s a badge of honor. They walk out. “Worst of the year!” they’ll say. It was trash, garbage, crap, tragedy, disaster, a stinker, agonizing, the new Hindenburg, directed by Michael Bay, pick your purple prose. For me and Paul Blart: Mall Cop 2, it’s been nothing but deep frustration and disdain. I am not being melodramatic. And I’m struggling to say something about it. I just want Paul Blart over with and out of my life, so I can get back to other movies. Literally any other movie.

What’s my avenging angle? My poison penstroke? My way of illustrating complete and utter resentment for wasted time and slap-dash filmmaking to the extreme? How bad can I make this sucker sound; lord knows the movie deserves it? No, Kevin James isn’t the devil. At least, I don’t think so. Surely this came from a place of love for the character? Wow, I just re-read that and uh, yeah, I take that backhanded compliment right back. My bad. Blart’s just an awful human endeavor.

Perhaps there’s a clever way to get at how painful an experience this movie is. And believe me: you know the reclining chairs they’re installing in some of the higher-end theaters these days? I was flat on my back, motionless, almost comatose watching this, waiting for it all to be over… and I’m not just talking about the movie. There was a point where I was considering writing a will because this film made me want to leave this Earth, because I don’t want to live on a planet where Paul Blart shills Sony products and airsoft guns.

We could possibly talk about this film dragging its ass into theaters six years after its aimless predecessor dragged its ass over the $100 million dollar line in returns. And that was basically a 90-minute ad for Rainforest Café. Paul Blart: Mall Cop hardly counted as a movie, it was more of an infomercial featuring a screaming mustache. Where are the Blart-maniacs that ensured the green light on this? Who in the hell demanded that Kevin James slap on a fanny pack and continue to fall off a Segway? Would someone please explain to me why Kevin James fighting an exotic bird at length is funny, and then never speak to me again?

How about we get into Paul Blart’s reckless stereotyping in the name of a thoroughly half-assed story? A story we haven’t even touched upon yet, actually. Huh. Okay, it’s a PG Die Hard in a casino, with an oaf, and product placement. Both Die Hard and Casino just winced.

Back to planning, how about we turn this into a think piece on the movie’s more negligent characterizations: A sassy, gay Asian man, a one-dimensionally brassy black woman, Philly and Jersey douchebags, a wacky old Indian guy, temperamental Latino security guards, you name it. But most of all, James subscribes to the school of “fatty go boom” humor. He chugs root beer, is rejuvenated with ice cream, and takes hits and pratfalls with all the energy and none of the finesse of say, Curly Howard or Chris Farley, rest their souls. Blart is resigned to being overweight, and in constant physical peril. When Blart gets graphically kicked by a horse, he should be dead. At one point Blart even says that “pain is my co-pilot.” Who says that, aside from a person suffering from chronic pain? Still. You saw this coming. You saw it, until your eyes rolled out of your head and crossed the street in annoyance.

How about the mordantly unfunny humor? Blart says things like “integrity is a bewitching gumbo.” What the hell does that even mean? It’s all discomforting, and worse, cruel. The film begins with Blart’s divorce (after six days) and his mother being run over by an ice cream truck. Or a mail truck? Will anybody correct me? Beside Kevin James? Again, you smart, hip, cinematically literate readers knew that Blart cares not for composing finely crafted humor or witty repartee about tourist excesses and states of panic in modern society. No, Blarty make funny.

There has to be something distinctly carnivorous to say about Paul Blart: Mall Cop 2. Also, I think a blood vessel just burst in my right eye, and my hands are starting to tense up in revolt. But I must crack this throat-swelling nut.

Puns. How about some puns? Those are funs! A Blart-saster. Terri-Blart. Paul Blart: Mall Crap, Number Two. Blarts of Darkness: A Hungry Studio’s Blart-pocalypse. At this point, I’m wondering if I can get away with a single headline review: PAUL FART.

You know what? Let’s not bother with wild and desperate flights of critical fancy in the search to describe just how dumpy Paul Blart 2 is. There’s nothing here that won’t come as a shock. Let’s keep this civil and succinct.

Paul Blart: Mall Cop 2 is a hapless, overblown caper with a guy that likes peanut butter M&Ms. Kevin James is neither a likeable nor even particularly believable lead actor. His closing zinger after beating a baddie is “always bet on Blart.” That’s no joke. By that I mean that I’m not kidding, and also that it’s not a joke. In conclusion, Paul Blart: Mall Cop 2 is really, really, really…really bad.