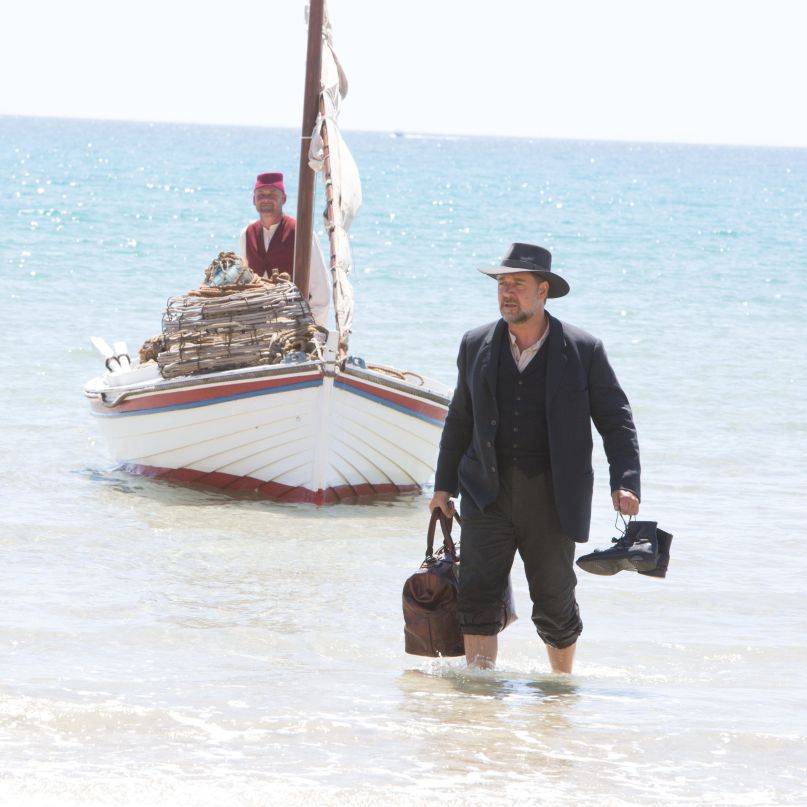 Searching for water in the dry and dusty expanses of the Australian Outback is, it turns out, an imprecise art. “I have dug a lot of wells that turned out to be holes,” reflects the titular hero of The Water Diviner, an Aussie rancher named Joshua Connor played by the typically rugged Russell Crowe. When we first meet Connor, he’s slowly zig-zagging across the desert, led by two L-shaped dowsing rods that waver unsteadily in the wind. When he finally finds his spot and digs a hole deep into the earth, he’s rewarded with a bubbling current of ground water. This is the science (or the pseudoscience, as some might allege) of water divining, and it happens to be an apt metaphor for Crowe’s directorial debut. In The Water Diviner, Crowe digs a lot of holes that turn into wells, but in several key moments, his film comes up dry or, at least, in desperate need of a shower.

Taking a 20-year-old cue from Mel Gibson’s Braveheart, Crowe has placed himself at the center of his own historical epic. The choice mostly pays off, as his characteristically steely complexion always seems to hold the appropriate balance of sorrow and hope. The barrel-chested Connor is filled to the brim with both, and though his emotions often lead him toward danger, he never seems to let them get the best of him. The same cannot be said for his wife, who becomes delusional with grief upon hearing that her three sons, sent off together to fight in the First World War, have died in combat at the Battle of Gallipoli in 1915. Four years later, she drowns herself outside the couple’s ranch house (the water giveth and the water taketh away). Finally forced to come to terms with his own repressed sorrows, Connor decides that he must travel to Turkey and find the bodies of his dead sons to bring home, though the rationale for doing so seems rooted less in common sense than in sentimentality masquerading as plot device.

But, then again, maybe that’s okay. American audiences might be unfamiliar with the Battle of Gallipoli and Australia’s contributions to the First World War, but for Crowe and his countrymen, The Water Diviner is a deeply patriotic film. Nearly 30,000 Australian troops died or were wounded in the Gallipoli Campaign alone, which is still referred to as the nation’s “baptism of fire.” This is not to say that The Water Diviner is uncritical of wars and the stick-thin motives of those who fight them. “You fight, you die, you get nothing,” says one Turkish soldier, puzzled by Australians’ sense of duty to the Commonwealth. “We should do business with this country!”

In a broader sense, this is a film about memory — how to remember and how to let go. In Istanbul, Connor meets an attractive Turkish widow (Olga Kurylenko) in denial of her own husband’s death. Bonded by loss, this not-so-odd couple begins a slow and tentative romance, though it’s crowded out and stunted somewhat by the film’s more dominant plotlines. Elsewhere, the Turkish Major Hasan (Yilmaz Erdogan) joins the Imperial Graves Unit, a castrated branch of the British military concerned only with finding and naming bodies. Though stranded on the opposite side of history, he sympathizes with Connor and decides to help him, stating that “some things should never be forgotten.”

Armenians will likely take umbrage at this line and at the whole of The Water Diviner, which effectively sweeps the Armenian Genocide — perpetrated by the Ottoman Empire at the same time as the film’s events — under an ornate Turkish carpet. The film’s failure to acknowledge this shameful act is indeed a crime of omission, and it’s also a sign that Crowe has bitten off a bit more of history than his hypermasculine jaw can chew. His earnest attempts to lend a human face to Turkey’s post-war struggles sometimes land him in the troubling waters of Orientalism, as does the implied exoticism of Kurylenko’s Turkish widow, who’s played by a Ukrainian, for chrissake. It all adds up to a fair amount of ethical awkwardness, and students of history will likely have to squirm through parts of this film to get to its payoffs.

These payoffs, of course, include one truly gut-wrenching scene of war that might be worth the price of admission on its own. The problem, aside from the moral questions, is the excess fat surrounding them. Crowe has not yet discovered how to make a fully streamlined action epic, and his failed experiments include haphazard crosscutting and some tonally jarring scenes that could have just been omitted altogether. With that said, The Water Diviner is a promising debut and a nice tribute to the Anzac troops who fought and died a century ago. Crowe probably has many years left before he delivers his tour de force, but at least he’s given us a tour worth attending.