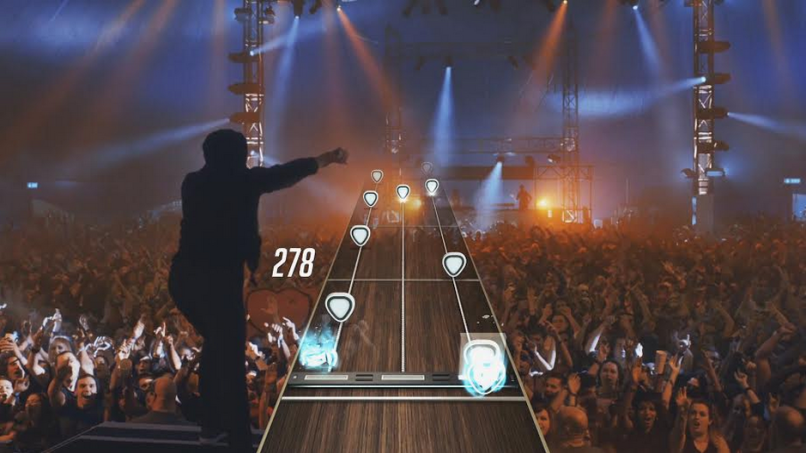 Activision and FreeStyleGames have announced a return of the Guitar Hero franchise with a new game titled Guitar Hero Live, set for release later this year.

It marks the first title in the highly lucrative franchise in half a decade, and it comes with a few major changes: For starters, Live is not just hyperbolic labeling. The game takes on a first-person perspective for the first time; instead of the cartoonish scenes from previous editions, users are now playing alongside real band members in front of real crowds. Gigs start backstage with pre-show rituals as your bandmates display nervousness or confident excitement. When you come out on stage — whether it’s at a tiny bar or festival main stage — you’re greeted by real cheering fans. And if you mess up, those fans will turn on you, booing and jeering, and your bandmates will begin shooting you nasty looks and mocking you. Because you’re “live,” it doesn’t look like you’ll be able to flat-out “fail” like in past versions. Exactly how the developers have managed to make the transitions smooth isn’t yet clear, though more details are expected at June’s Electronic Entertainment Expo. (The trailer below hints that it may be “head turns” that pan to new sections of the scene.)

What’s more, as your character (whom you never actually see beyond their hands) moves about the stage, the sound will change. Back up, and you’ll be “closer” to the drums, so more drums will come through. Step toward the edge of the stage, and the cheers will be right in your face.

Also new to the series is GHTV, what Activision is calling “the world’s first playable music video network.” The 24-hour channel plays music videos from various genres and allow players to play along, either solo or against people around the world. As for what tunes will be available in-game or on GHTV, the publisher promises “hundreds” of titles, with known artists including The Black Keys, My Chemical Romance, Gary Clark, Jr., Green Day, Ed Sheeran, The War on Drugs, Skrillex, The Rolling Stones, The Lumineers, Pierce the Veil, and Blitz Kids. Early previews have noted that Fall Out Boy’s “Light ’em Up”, The Killers’ “When You Were Young”, Of Monsters and Men’s “Little Talks”, and American Authors’ “Best Day of My Life” will all present.

Finally, the guitar controller has been altered a bit as well. Instead of the multi-colored line of buttons, users are now presented with two rows of three buttons stacked on top of each other. The top row has an added criss-cross texture to help differentiate where your fingers are. Beginners will use just the bottom row, while working your way to Veteran will require mastering “chords” using both rows simultaneously. The on-screen cues have been sapped of color, as well, with black or white plectrums pointing in the direction of the row you need to use.

Activision is aiming for a fall release date on Xbox One and 360, Playstation 3 and 4, Nintendo Wii U, and even mobile devices, with a price point of $99. Interestingly, a new Rock Band game was also announced last month in vague terms from Harmonix, the company that originated Guitar Hero.

Why the sudden return of rhythm games? One thing worth considering is how different the music market is in 2015 than it was when these games started popping up a decade ago. Considering how low album sales have declined, there’s a good chance labels and publishing companies have gotten less precious with their licensing, meaning Activision and Harmonix won’t need to shell out as much capitol just to get their games off the ground. It’s also unclear how the game(s) will impact the music market. GHTV is launching without a subscription service, though Activision has been tight-lipped about whether premium channels are in the plan. There’s also murmurs that new songs will be automatically added, though whether this just means you won’t have to buy entirely new discs like before (as with Legends of Rock or Warriors of Rock) or that all DLC will actually be free is unknown at this time.

Below, check out a trailer for the game that shows exactly how “real” the whole thing feels.