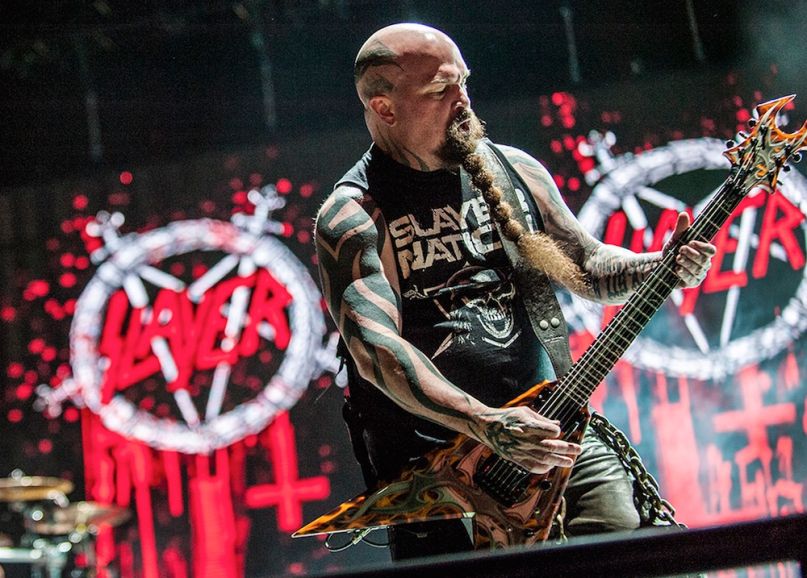 This summer, Slayer will return with a new album. The 12-track effort follows 2009’s World Painted Blood and marks the group’s first LP since the death of guitarist and co-founder Jeff Hanneman, who passed away in 2013. As a preview of what’s to come from the as-yet-untitled effort, the thrash metal outfit’s let loose “When The Stillness Comes”.

Fiendish and pulverizing, the nearly five-minute track was written by guitarist Kerry King during a particularly frustrating day on the road. “We were touring Europe and we had a three-hour ride in some fucking minivan, and I’m just miserable in the backseat, not into anything,” he explained. “So I just stated jotting down hateful thoughts. It’s about a dude who wakes up at a crime scene and realizes he’s killed everybody. It’s really cool.” Fans may find the song familiar, as an instrumental version of it first surfaced in a car commercial for Scion. Listen in below.

The forthcoming LP, produced by Terry Date (Pantera, Soundgarden), is expected to hit shelves on August. For those who can’t wait until summer, “When the Stillness Comes” will also appear on Slayer’s upcoming Record Store Day 7-inch.

In related news, Slayer is set to perform at Converse’s Rubber Tracks concert event in Boston on April 29th, which also features The Replacements, Dinosaur Jr., and Passion Pit.