Spotify is now worth more than the entire US music industry?

One streaming service worth more than all music sales combined 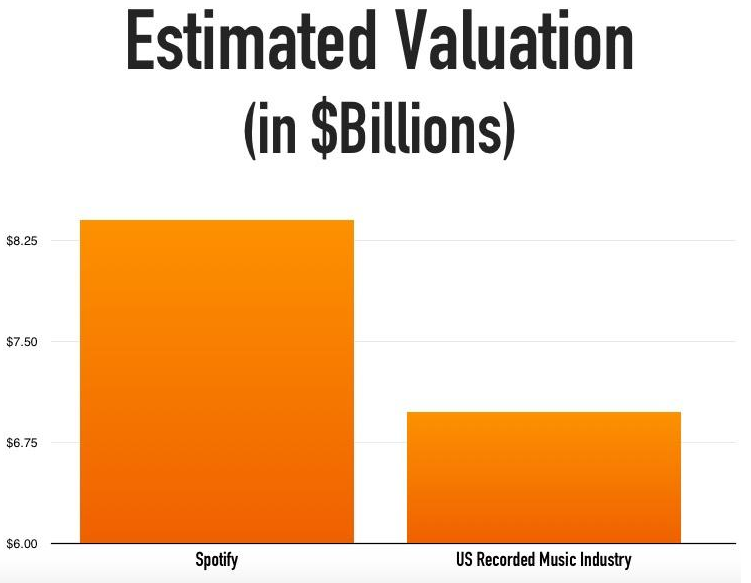 A month ago, news came that revenue from streaming services had surpassed CD sales for the first time in history. Now, The Wall Street Journal is reporting that after securing $400 million in fresh funding, Spotify is now worth more than the entire US recorded music industry.

The deal pushed the streaming service up to a net value of $8.4 billion, more than double that of its nearest competitor Pandora, which sits at around $3.5 billion. According to the Recording Industry Association of America, the revenue of the entire industry as of 2014 was $6.97 billion, which accounts for physical sales, digital purchases, and yes, streaming.

Streaming income, which includes paid subscriptions and ad earnings, accounted for 27% of the recorded music industry’s $6.97 billion earnings. Yet Spotify, just one company that makes up that percentage, is actually worth more than every single US retail music revenue source combined. Given, Spotify is an international company, but either way the math is fascinating.

Of course, the data is actually comparing two different things, in that one is value (Spotify’s 8.4 billion) and the other is revenue (RIAA’s $6.97 billion). The thing is, valuation is determined by an estimate of future profits, but Spotify has never actually turned a profit. Essentially, the report is suggesting that with the way things are trending, the US music industry’s valuation could eventually equal its revenue, with Spotify being more valuable overall.

In the good news column, the 25% increase in streaming revenue more than offset the 8.7% drop in permanent digital download sales. So while the industry as a whole has remained pretty stagnant for the last five years (there was a 0.5% drop from 2013 to 2014), at least it’s not getting much worse.