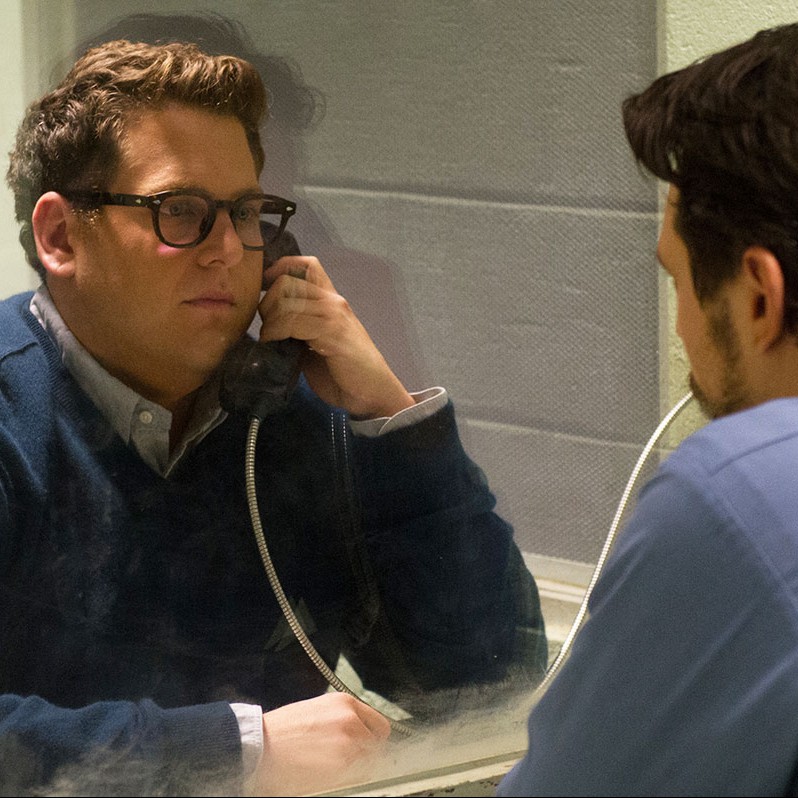 “Quid pro quo, Clarice.” Jonathan Demme’s Academy Award-winning The Silence of the Lambs comes to mind while watching Rupert Goold’s legal drama-thriller, True Story. The entire film, starring Jonah Hill and James Franco, tends to revolve around the Latin term and mutual agreement of “something for something.” Hill plays Michael Finkel, a disgraced journalist formerly of The New York Times, who’s struggling to find a story, let alone a publication that will have him. His problems sputter to a halt when he meets Christian Longo (Franco), a man who’s been charged for murdering his wife and three children in Oregon. The twist? Longo used Finkel’s identity as an alias when he fled the country to Cancún. When they meet, an incarcerated Longo agrees to tell Finkel his story in exchange for some writing lessons. “Quid pro quo.”

Such an understanding would demand a close relationship. Goold attempts to forge one between Franco and Hill, but never achieves a connection outside of the presupposition that they’ve previously worked together in films. The characters, instead, speak in low tones, stare vacantly, and mutter Big Statements monosyllabically like: “The truth always matters”; “Everybody deserves to have their story heard”; “I don’t presume anything anymore”; and “I think about them every night.” All of these lines are delivered as scripted as they read right now, namely because they’re so goddamn scripted from the get-go. Neither actor elevates the language with their performance, so it’s impossible to feel anything throughout the film, whether it’s Hill’s apparent obsession with the story (he’s pinning relics on the wall!) or Franco’s subtle lies (he’s staring!). From a small distance, say two rows from the silver screen, they’re simply Hill and Franco reading lines unemotionally.

And when there is emotion, it’s during awkward moments of levity between the two, which is even more disconcerting. In their final scene together, which should be quite emotional yet goes by unnoticed like an aisle of Snackwells, there’s an exchange between the two that registers like something out of a short diatribe in This is the End. Which is frustrating because we’ve seen diamond performances from either party; Hill’s Oscar nominations under Bennett Miller and Martin Scorcese were well earned, while Franco’s role in 2013’s Spring Breakers deserved the Best Actor nod and win that year. They should be able to pull off Finkel and Longo with ease, but they come off so removed and so distant and so bored. In fact, the only real souls in the entire film are Finkel’s girlfriend, portrayed by Felicity Jones, who adds legitimate venom to her scathing closing monologue (“You will never escape what you are”), and the great Robert John Burke as a hardened detective ready to give up on humanity.

What’s strange is that Goold’s background is primarily directing stage productions (this, in fact, marks his feature debut), and yet his strengths here lie strictly behind the lens. From start to finish, it’s a sharp, picturesque film with succinct framing and vivid cinematography by Masanobu Takayanagi. The finesse by which they capture each scene’s natural elements — snow and rain, night and dawn — is awe-inspiring and more indicative of a veteran team than, say, someone offering up their first pitch on the mound. There’s a brilliant sequence when Longo calls Jill, and the way Goold crosscuts between close up shots of Franco’s hands or mouth while Jill slowly meanders around her home, closing doors and turning on lights, is spine-tingling stuff. For a few minutes, the film actually carries a tone that’s anything but vacant.

That’s why True Story feels like such a disappointment. It’s an okay film that should have been stellar. Given the A-list cast and the gripping true life story, this film could be haunting and invigorating. But it isn’t and its loose themes of truth, trust, and betrayal whimper to the finish line with very little weight and a ham-fisted knuckle sandwich to the mouth. At the end, Finkel’s giving a reading at a bookstore — if you think that’s a spoiler, how do you think this film was made? — and he sees one of his fans visualized as Longo, who asks him if he lost some of himself in the process of writing the book. Groan, right? It’s this lack of subtlety that downgrades True Story into a crumpled piece of questionable non-fiction or, to borrow from Mr. Lecter once more, “a well scrubbed, hustling rube with a little taste.” There’s something ironic about that.