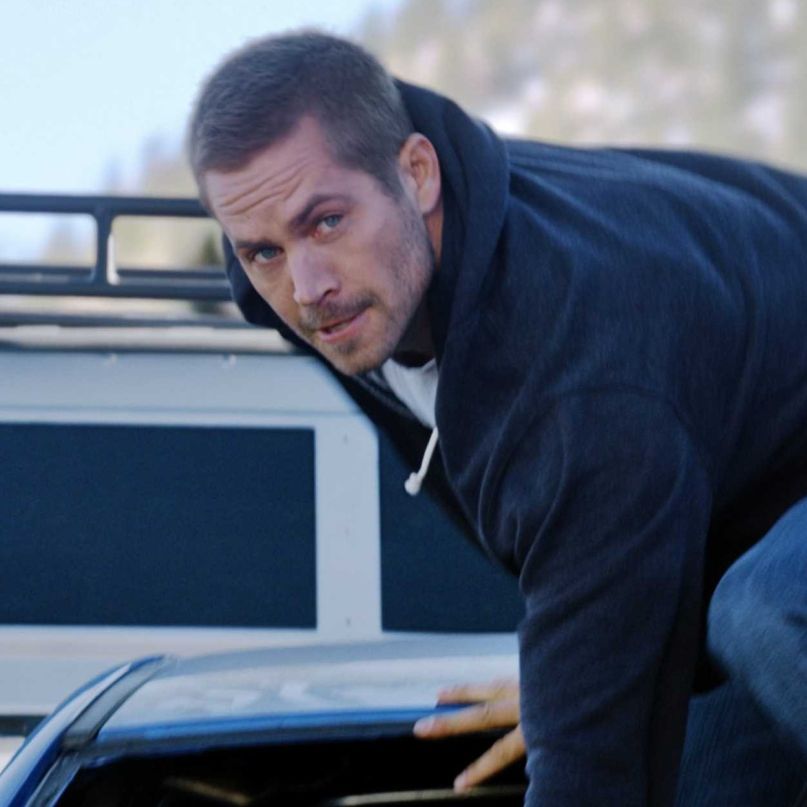 Furious 7 has had something of a pall over it ever since the untimely passing of series lead Paul Walker. Between all the phases the series has been through over the years, from aggressive self-seriousness to foreign trend-chasing to its wonderful, inexplicable left turn into gleefully over-the-top action with Fast Five, Walker starred in more Furious films than any of the other series leads. In a lot of ways the series reflected his career trajectory, as he moved from his early pretty-boy trappings into weirder, more assured fare like Running Scared. For its part, the promotional runup to the film’s release has played into the “one last ride” hanging over the franchise, a move that would be a lot more tasteless if Furious wasn’t a franchise exclusively about family and loyalty over all.

The film marks the end of an era in more than just the obvious ways. For a few installments now, Furious has moved progressively further away from the macho gearhead place it started and into the world of winkingly cartoonish action movie chaos, and Furious 7 is far less a racing movie than a globe-trotting thriller about espionage and revenge that also involves cars. In keeping with the series’ penchant for absolute continuity no matter the shifting of casts or locales, Furious 7 sees the team reuniting to avenge their dead friend Han (Sung Kang), who was actually killed all the way back in Tokyo Drift, a death retconned in the last film as the victim of Deckard Shaw (Jason Statham), the even more menacing older brother of Luke Evans’ previous villain.

The “…and he has a brother” silliness of the premise is something that wouldn’t work in most movies, but Furious 7 isn’t most movies. It’s a movie in which Dwayne Johnson flexes his way out of a full-arm cast, where stealing a computer program that can turn all technology into a global surveillance network involves a parachute drop of a half dozen cars and a fistfight with acclaimed Thai martial artist Tony Jaa, a movie that brings in Kurt Russell to wield guns while wearing sunglasses and extoll the virtues of small-batch craft beer as a shifty, wisecracking government higher-up. It’s a giddy sugar rush of action movie madness, moving rapidly between demolition derby setups while allowing just enough time for the emotional beats that have been one of the franchise’s most distinguishing features since its inception.

(Marathon: Every Fast and Furious Film in One Day)

They work, because unlike a lot of long-tenured franchise entries, Furious 7 has earned them. The series has never been averse to a little (or a lot) of cheese, and once it replaced alpha male posturing with a genuine earnestness about the importance of always remaining true to those who remain true to you, it became a kind of series that’s too rare in the current era of frequently dour action releases. Furious 7 is an exceedingly fun movie to watch, and a big part of the pleasure comes from how good it is to see these characters again. After Dominic (Vin Diesel) sees his home demolished by Shaw, he rallies the troops, allowing Brian (Walker) to get back into the action after becoming a family man.

The gang’s all here, minus those who met their fate in the previous installment: the wisecracking Roman (Tyrese Gibson), tech wizard Tej (Chris “Ludacris” Bridges), the memory-deficient Letty (Michelle Rodriguez), and Hobbs (Johnson), the federal agent who figured out that this group of fast-driving miscreants make for a surprisingly adept mercenary squadron when needed. A new player on the heroes’ side is Ramsey (Nathalie Emmanuel), the hacker who came up with the God’s Eye program; on the other team, Djimon Hounsou joins the series as a menacing heavy who wants God’s Eye for himself and realizes that the team’s fixation on Shaw might work to his advantage.

Furious 7 jumps from Azerbaijan to Abu Dhabi and eventually back to the series’ central hub in Los Angeles, but director James Wan (taking over for Justin Lin and adding even more visual panache) and longtime screenwriter Chris Morgan keep the action tethered to the investment viewers have made in these characters over time even as the wreckage piles up and the setpieces build in insanity. (The film’s first action sequence, involving the aforementioned parachute drop, could make for the climax of most other movies. For Furious 7, it’s a mere warmup.) Plausibility left the franchise several installments ago, so when Dominic dead-lifts a sportscar by its bumper or Hobbs somehow ends up with a gatling gun at one point, it’s hard not to just play along with a “yeah, okay, this works” attitude about the proceedings. It’s the kind of mentality Furious 7 actively fosters, and because everybody involved seems to be having an absolute blast, it’s easy to play along.

Furious 7 is at turns a celebration and a farewell, a film that goes for broke in using its many seemingly forgettable bits of established canon to tie together all of the films and pay its respects. The CGI augmentation used to finish Walker’s scenes is remarkable in its execution, and it allows the film to honor him in the way only these movies could; the film’s many acknowledgements of it being the “last ride” in a fashion (despite the fact that it’s far, far too entertaining to not become yet another sequel-spawning hit) are effective because this is a movie where Diesel can declare that “I don’t got friends, I got family,” and there’s nary a trace of irony involved. As a relentlessly paced action movie, Furious 7 is an excellent entry for those who would appreciate this sort of thing. As a memorial for one of its own, it’s about as affecting as big, loud, ridiculous action movies get.