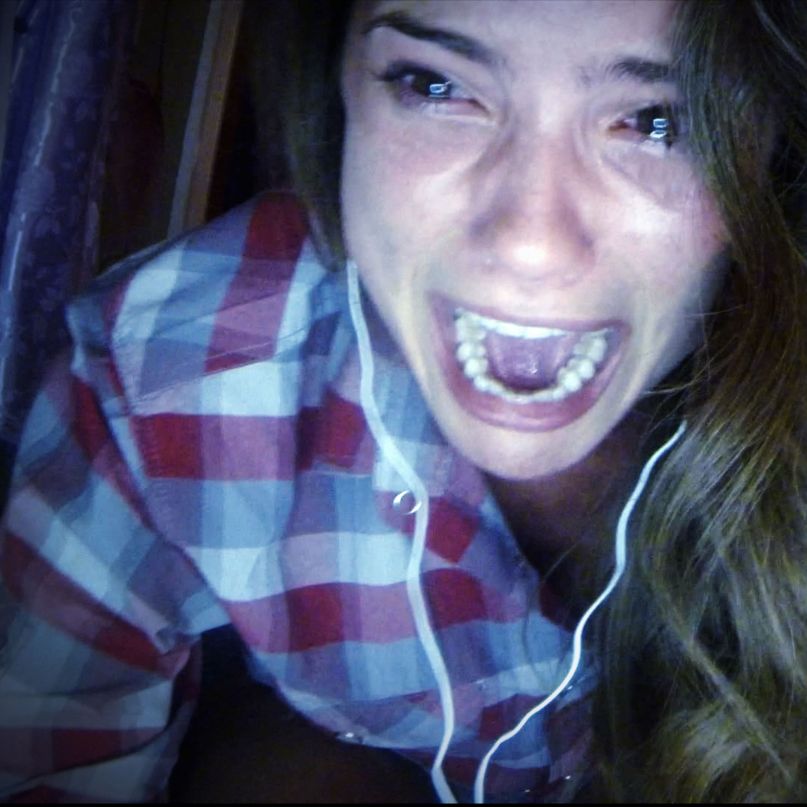 Cast a wide enough net and you’re wont to catch a rare fish. That’s presumably the motto for Blumhouse Productions, whose track record is about 16 for 45, not counting the half-dozen horror exports due out this year. But, of those 16, they’ve managed to spawn a number of original franchises (Paranormal Activity, The Purge, Insidious), embrace some alternative horror (Creep, The Lords of Salem), and even shake up the Oscars (Whiplash). Say what you will about their overall track record, but they’re an unstoppable empire that continues to find fresh air amidst a barrage of low-budget hiccups. Their latest sigh of relief is a clever spin on the found-footage genre and one hell of a cautionary tale on cyberbullying: Unfriended.

Directed by Levan Gabriadze and written by Nelson Greaves, the story follows a group of high school teenagers haunted by the spirit of their dead friend on the one-year anniversary of her tragic suicide. One by one each friend is stripped of their secrets and lies as the spirit maliciously attacks each teenager with grizzly deaths. Here’s the catch, though: This all takes place online. Similar to Nacho Vigalondo’s Open Windows or Steven Levitan’s recent Modern Family episode, “Connection Lost”, the entirety of the story is localized on one desktop, using programs like Skype, YouTube, Messages, Facebook, Spotify, Chatroulette, and even WiFi printing to carry its action and tell its sordid tale. In this particular case, said desktop belongs to our female lead, the young and seemingly innocent Blaire (a strong Shelley Hennig).

What ultimately sells Unfriended is how it takes what’s otherwise this year’s latest gimmick and turns it into a solid medium. Both Gabriadze and Greaves orchestrate one feverish night between a group of meddling kids with a fluidity that mirrors our own personal online habits. When Blaire clicks through windows and programs, it’s not just prescient advertising for new services and aspiring indie bands; it’s instead quite natural and eerily relatable — almost to the point of obsession. Granted, the film will feel somewhat exclusionary for those unfamiliar with modern online culture, but that’s a risk worth taking. Besides, the video chats are pretty self-explanatory, and the text is no different than subtitles. So, even if you’ve never Skype’d or given your life to Facebook, you’ll likely understand what the hell’s going on.

(Interview: Cyberbullying and Digital Ghosts: The Horror of Unfriended)

One of the dangers of this unique medium is that online culture is often boring. Vloggers mumble infinitely, music’s often shuffled around chaotically, windows are tediously re-opened (how many times have you opened Facebook while surfing through Facebook?) — it’s endless meandering. To their credit, this cast of no-names that Gabriadze works with never allow for too many dull moments. They bicker, they joke, they argue, and they scream at one another, no different than the average group of teenagers you can find all across America. What makes them interesting, though, is how they interact and form a hive-mind mentality. What’s frightening, then, is seeing how this haunting force tears them apart — first psychologically, then physically.

How the horror is often executed is where the film trips, but not by much. Now, part of the reason our culture is addicted to outlets like LiveLeak or World Star Hip-Hop or the WTF subreddit is how we’re able to experience atrocities and horrors unadulterated and at face value. Unfriended taps into that culture and addiction, but it still feels the need to lean on atypical horror tropes like cutting away, quick scares, and shattering noises. These feel ancient and somewhat tedious amidst the unfettered action on display — it’s also unnecessary. Much of the shock and awe comes across as cheap when it could have been haunting or even threatening. That’s not to say the deaths don’t deliver — they’re still jarring — but they’re tethered to these cheap thrills that shake down its gripping realism.

Nonetheless, that’s hardly enough to discredit Unfriended. It’s a horror film very of its time, when cyberbullying continues to plague schools, offices, and neighborhoods. Moreover, it proves that Blumhouse still knows how to tap into the struggling subconscious of today’s teen youth, a demographic that will always fuel horror, which says more about their strategic thinking than anything else. Business aside, Unfriended is a smart, thrilling, and addicting byte of horror that’s worth thinking about. It’ll be awhile before your mind hits CTRL + ALT + DEL on this one.