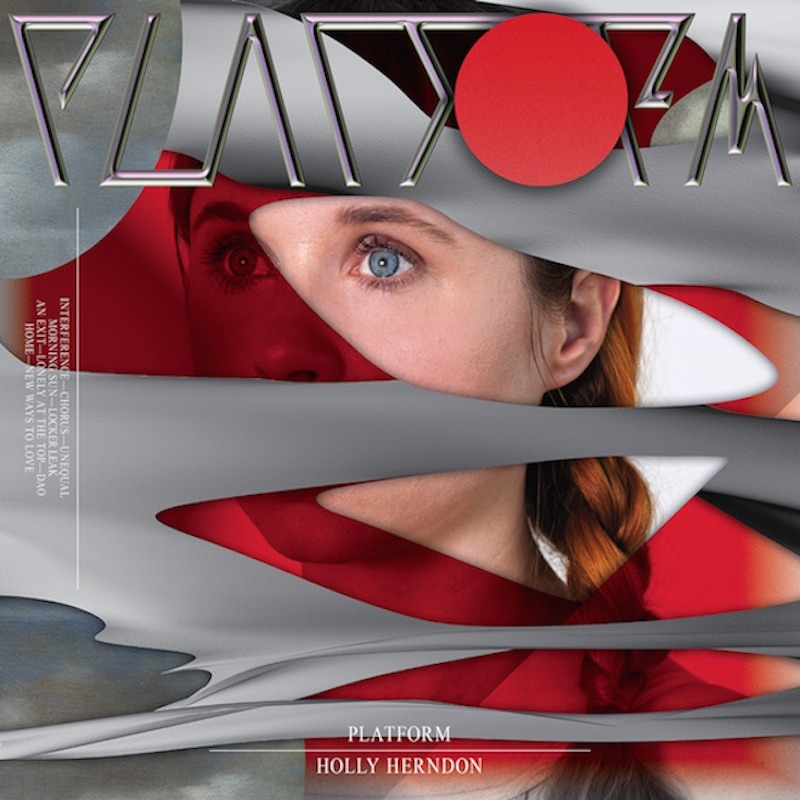 The most disconcerting thing about Platform isn’t how it sounds like a fractured kaleidoscope. It’s the cover. Holly Herndon, redheaded and cherubic, stares into the distance as her portrait is obscured by both steely matter and an red screen. The screen obstructs her vision while the matter obscures her mouth. In a way, it synopsizes Platform’s central question: How do you express humanity in the digital age?

Platform is composed of fragments and detritus. Samples come from Skype activity, YouTube clips, the closing of a refrigerator, and Herndon’s own angelic voice. For the most part, they all move together in an abstract melody rather than cacophony. The project is a contradiction: It expresses with what are too often believed to be expressionless tools. Herndon, staunch defender of laptop musicianship, told Consequence of Sound that that’s not an unfathomable idea. “They think it’s separating us and we don’t talk to one another anymore and we just use emojis,” Herndon said of technology. “That doesn’t negate emotion. It’s just a different kind of emotion. It’s an extension of our human relationships.”

But why does it all sound so challenging and unapologetically experimental? The contrast between Herndon’s sampled presence and the warped doodads represents Platform’s inner tension — between technology as a separator and technology as a conduit. If human connection is what’s lost in the digital age, Platform’s successes are in how it wrings humanity from that post-human web. The YouTube ads on cuts like “Unequal” and “Locker Leak” aren’t just eccentric flourishes, but another thread that complicates the journey toward emotional literacy.

At first, Platform works as it should, translating a heady concept and construction into something that works on a visceral level. “Interference” and “Chorus” kick off the album and stand out as immediate highlights. Like a laptop booting up, “Interference” gradually builds upon its rotating vocal chirps and whiz-bang percussion with a sense of urgency. The elements warp into something robotic as they’re tethered by static and liquid bass, becoming alien and indelible at the same time. “Chorus” levels out the ante for a number that’s more accessible, yet no less structurally complex. It’s almost operatic — her voice echoes, chopped by syncopated percussion and bubbling effects. It’s harmonic but, again, tense. Electronic constructs batter down on Herndon’s airy voice. What comes out is a chant that sounds like “I refuse you.” We don’t specifically get what that “you” is — whether it’s a lover or a machine — but what’s impressive is the compelling musicality.

Platform is continuously emotive, although it never quite tops the peak of “Chorus”. It’s not entirely a crutch, but Herndon does manage to use technology to pull out the multitudes her lilt is trying to express. “Morning Sun” switches from staccato rhythm to something more luscious. “Home” pulsates, using abbreviated pants and a floating vocal presence to evoke a playful sensuality.

At other times, Platform feels like an attempt at using a digital space to magnify human emotions rather than offer a fully formed example. It can get lost in its experimentation; some tracks come across hollow despite their busy structures. The hymnal textures on “Unequal” only serve as a stopgap between the much stronger “Chorus” and “Morning Sun”. The capriciousness of “DAO” feels a tad purposeless by the end. But if the comparatively saccharine closer “New Ways to Love” proves anything, it’s that there is a method to Platform’s madness — there’s potential in embracing the form rather than scoffing at it.