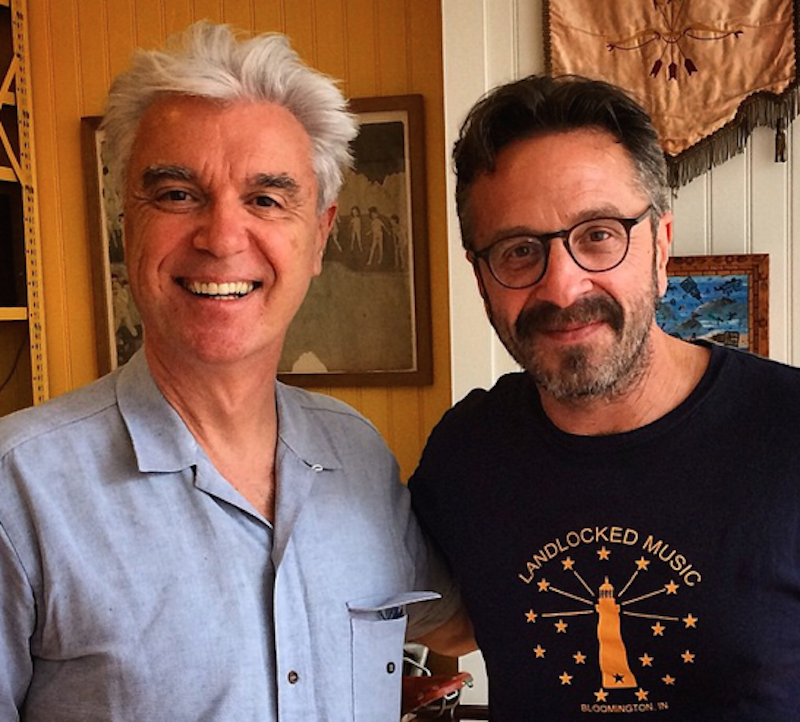 Ahead of his Contemporary Color exhibition this July, David Byrne sat down with Marc Maron for a chat on the latest episode of WTF Podcast. As with many of his musical interview subjects, the Talking Heads head was a big influence on Maron, which led to a compounding of nerves and — as always — great discussion.

After recounting how Maron had once seen Byrne years ago at an airport baggage claim and more recently riding his bike with lights clipped to his pants, the two began by discussing how Byrne became fascinated with color guard. That led to a discussion about how Bryne’s always tried to blend big city mentality with “under the radar” country activity, something he touched on ironically with Talking Heads’ “Big Country”. Even further, they talked about how Byrne’s music often blends “high-brow” art culture with “low-brow” pop culture.

They touched upon how Byrne doesn’t “have a nostalgic bone in” his body, something he’s talked about frequently. “I don’t look back as ‘Oh, that was a golden age,’ or ‘Things were better when New York was shittier,'” Byrne explained. “You can look at certain things and go, ‘That was a good aspect at that time,’ but I don’t look at things and say, ‘Things were better then.'”

Near the end of the interview, they talked about Byrne’s work with St. Vincent. “It was a little charity over on Crosby Street. In a used bookstore, they’d do these little concerts as AIDS benefits, and they would invite different artists to collaborate,” Byrne explained, saying he met Annie Clark at one such event featuring Björk and Dirty Projectors. Inspired by how David Longstreth wrote six songs for the event, when Byrne was asked to do something with Clark, he took it as kind of a challenge. “She came in and said, ‘Let’s do it with a lot of brass instruments…’ I said let’s just try a few things, and if it works great, and if it doesn’t work, we just quietly put it away and no one ever knows what happened.” They never did play that benefit show, but it became Love This Giant.

Further topics of discussion include the time his dad fixed a submarine with a coat hanger, Byrne’s first encounters with music and instruments, how he switched majors in college to expose himself to a variety of art forms, Byrne’s work in opera and ballet, and even the Talking Heads breakup. Listen to the whole thing at WTFpod.com.