Thanks to Die Hard with a Vengeance, I Can Stomach Violence

Our resident gore buff revisits his squeamish days on the sequel's 20th anniversary. 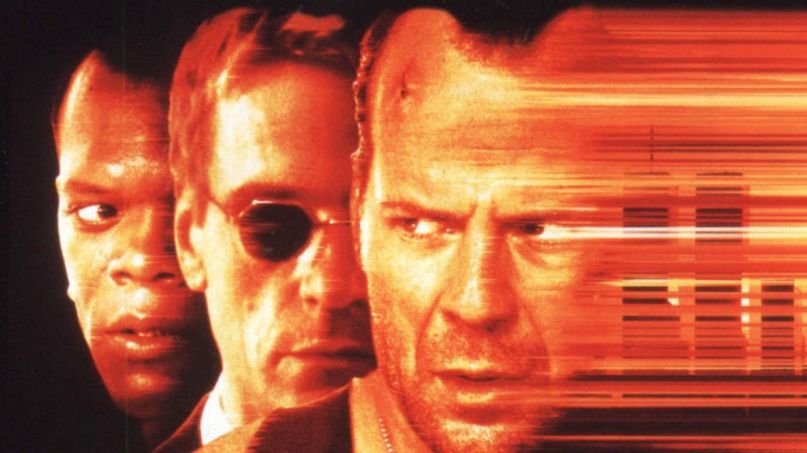 There was a time I couldn’t do violence. At all. The briefest glimpse of blood, a glinting steel blade, any threat of bodily harm–they all sent me diving under covers. My parents showed me Psycho, a stone cold classic, when I was nine or so, and I spent half the film pretending I had diarrhea so I wouldn’t have to watch Janet Leigh get stabbed in the shower. I knew it was coming, and the anticipation was a bundle of razor wire in my belly, coiled and taut. I’d hear the screams from the other room, feel the wire unspool, the breath return to my lungs, and, for a while at least, it was okay to go back into the living room.

“It wasn’t that bad,” they’d always say–my parents, my friends, and, most embarrassingly, my younger cousins. “What’s your problem?” they asked. “It’s all fake.”

This is funny, because I’m something of a gorehound now. I have my limits–the tarantula/eyeball scene in Lucio Fulci’s The Beyond, for example–but, as a sucker for genre filmmaking, I want my senses assaulted as much as I do my emotions. I want those moments that feel like pinpricks to your pupils, those sequences that suck away your breath and hold your gaze like some kind of unblinking sociopath. Sometimes, a splash of artful splatter is all it takes for a film to endear itself to me.

It might be weird, then, that for me it all started with Die Hard With a Vengeance, the 1995 second sequel to John McTiernan’s masterful 1988 action extravaganza Die Hard. It’s not a particularly violent or breathless film, nor is it an enduring staple of the genre. What makes it work is the casting: Jeremy Irons chills the spine as the nefarious Simon Gruber, Samuel L. Jackson exudes humor and humanity as reluctant sidekick Zeus Carver, and Bruce Willis is still able to find the vulnerability in the increasingly unstoppable John McClane. Chalk it up to the screenplay, which was adapted from an existing script called Simon Says into a Die Hard sequel, but the plotting is sloppy. The seams show. The seams rip. Logic leaps like a bullfrog. The lack of continuity from previous Die Hard films–Gruber family aside–doesn’t help it much, either, at least for die hard Die Hard fans. There’s also a cartoony element to its supporting cast that clashes uncomfortably with some of the story’s more straight-faced elements, which include race relations and the threat of exploding children.

But that’s what I needed, though, as a blood-phobic pre-teen. I needed the silliness. When my friends and I snuck into Die Hard With a Vengeance one sunny June Sunday, we had just left a screening of Casper and felt like getting up to no good (no doubt inspired by that ephemeral little scamp). Audiences were streaming into the theater down the hall, no ticket takers were present, and we didn’t want to go home. When I saw that it was Die Hard With a Vengeance, however, I tried to talk them out of it. “We’ll get caught, they’ll kick us out, etc.” My objections went unheard. I followed them into the darkness. We sunk into a trio of seats in the back left. I considered going to “the bathroom” during violent scenes, but there was the risk of being recognized by theater staff as stowaways. I had to sit through this thing.

But Die Hard With a Vengeance sets you at ease from moment one, when The Lovin’ Spoonful’s infectious “Summer in the City” underscores scenic shots of New York City in the summertime. I was so taken with the song that I promised to sing it softly to myself whenever I saw blood. In the next few minutes, we meet supporting characters that feel plucked from cozier films, the comedies I watched with my brother. Colleen Camp’s Connie Kowalski is a ballsy New Yawkah brimming with bon mots, while bumbling bomb expert Charlie pontificated with the enthusiasm of a newborn corgi. I loved them. They made me feel safe, even as the razor wire began coiling in my belly.

Twenty or so minutes later, when Detective Ricky Walsh is shot unceremoniously by a boxish Russian brute named Otto, the movie’s first burst of violence, I closed my eyes tight, singing “Summer in the City” to myself. “It’s over,” my friend whispered. I opened my eyes. And there was Ricky’s dead body, bloody in a subway tunnel with a bullet wound. My friends laughed. But this image of Ricky’s dead body didn’t incite terror so much as exhilaration. Morbid? Sure. But it felt like a step. It felt like growing up. Charlie and Connie came back, I smiled. They prepared me for the next one. And I realized I was having fun. Suddenly, the razor wire in my belly began to feel like jump rope, elastic and resilient.

And then it happened: Die Hard With a Vengeance’s one true shocker. As Simon and his goons invade the vaults of the Federal Reserve Bank of New York, a chubby guard begins unloading a shotgun at his attackers, bellowing with rage. And from the wings comes a woman of whom we’ve heretofore only seen glimpses: she carries a curved blade, which she uses to slice the guard’s carotid artery and offer us a prolonged look at the spray of blood squirting from his slit neck. I didn’t look away. My friend whispered: “It won’t get worse than that.” I felt a rush of relief. I breathed deep. That had been the big drop on the rollercoaster. Whatever was coming, I could handle it.

I emerged into the summer twilight refreshed. I rode my bike to Hollywood Video. I walked aisles I’d been too afraid to walk before. I rented Die Hard and Die Harder. I grimaced as McClane plucked glass shards from his foot, when a henchman was thrown into a jet engine. But I never looked away. And for perhaps the first time in my life, watching movies began to feel like an adventure.

In high school, watching a movie like Reservoir Dogs felt like taking a risk. It became my favorite movie. I came to love horror by peeking through my fingers at the unnaturally bright blood and limp intestines of 1978’s Dawn of the Dead, a movie that made my heart beat so hard that I began sweating. Extreme flicks like Irréversible and Funny Games were punishing at the time, but I came away feeling strangely cleansed. Even today, there are movies that wind up the razor wire in my belly: Cannibal Holocaust, Martyrs, even Human Centipede, but that’s just ‘cause I don’t do poop. Though maybe I should?

Every movie is, in itself, a kind of risk. If we don’t take it, we’ll never know what we like. And isn’t that why we were put on this planet? To figure out what we like?