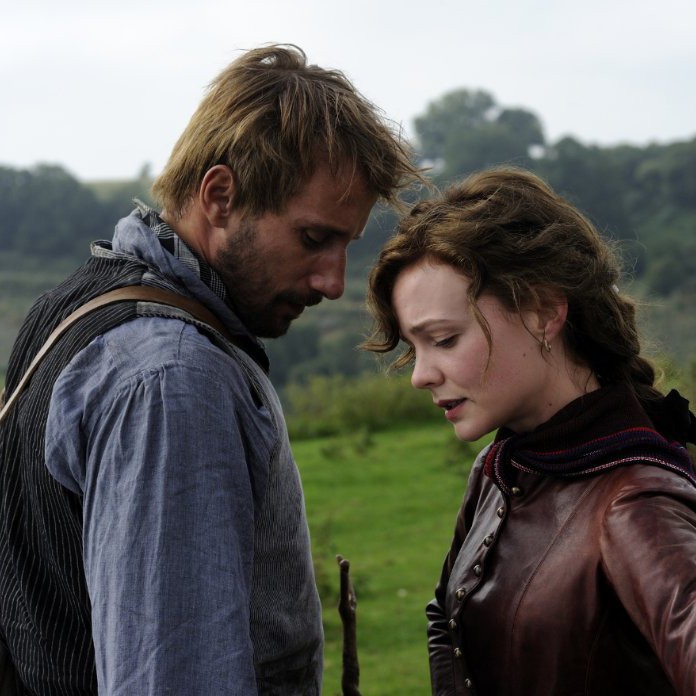 Carey Mulligan recently spoke out about what she labeled a “massively sexist” film industry. “There’s a lack of material for women. A lack of great stories for women.” Thomas Vinterberg’s Far From the Madding Crowd, based on the 1874 novel by Thomas Hardy, likely veers closer to what she had in mind.

Mulligan holds her own in the face of three imposing male suitors and delivers a confident performance amid a charming, beautifully lensed and strongly acted romance. The story and the screenplay, however, have a little further to go to strike a powerful feminist blow.

Bathsheba Everdene (Mulligan) was always seen as “too accustomed” and “too independent” for her time. When her rugged and handsome neighbor Gabriel Oak (Matthias Schoenaerts) proposes marriage, she replies, “I’d hate to be some man’s property. I’d need some man to tame me and you never could.” Perhaps the women’s rights themes are a bit too on the nose, even for Victorian England.

Bathsheba is soon granted a bountiful inheritance and takes over the Everdene barley and wheat estate. She asserts her authority as the farm’s new “mistress,” not master. She even negotiates a deal at the market among a bunch of men in black, all shocked to see a woman dressed in pink. Mulligan finds her voice and authority with this character with ease, but things pick up when she then hires Oak as her new shepherd after he’s displaced from his farm, constantly confiding in him but keeping his subdued advances at arms’ length.

She then sends a valentine to her wealthy but stuffy neighbor William Boldwood (Michael Sheen), and enters into a love triangle when he too proposes marriage. She meant it as a joke, only to have the handsome man in uniform Sergeant Francis Troy (Tom Sturridge) emerge as a more dominant presence in her life. Far From the Madding Crowd is a story about a woman’s choices and independence and how those qualities determine love, and if anything it’s a shame to see this more predictable third man stand in counter to the film’s feminist statements.

Vinterberg, who last directed the stellar The Hunt and was one of the founders of the Dogme 95 movement, finds the best notes in Hardy’s story when he plays up its dark edges. Perhaps the film’s most memorable scene is early on, when all of Oak’s sheep are chased off the edge of a cliff by his farm dog. These lifeless lumps on the shimmering beach below make for a beautifully grim image, and Vinterberg’s cinematographer Charlotte Bruus Christensen plays with unnatural light in dark places to capture the magic and reality in this Victorian England period piece.

The standout, however, remains Mulligan. Far From the Madding Crowd may not be the most ideal role for a woman, but she’s an actress who can take this ordinary material and make it sing.