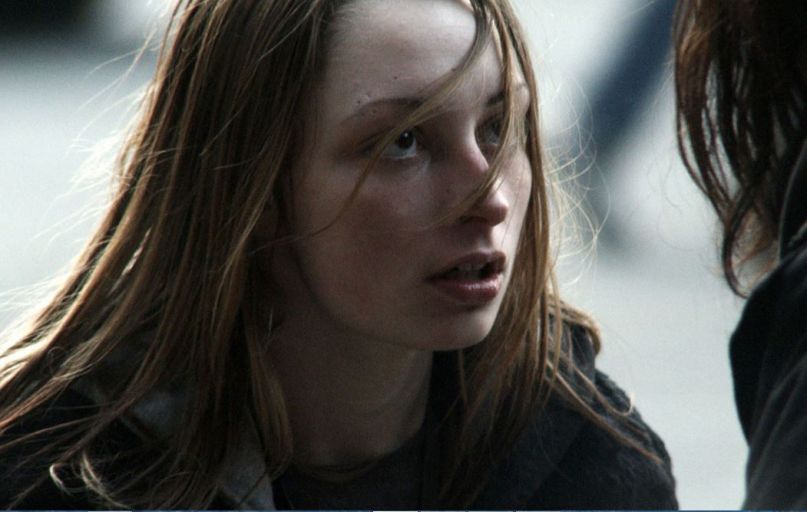 Harley (Arielle Holmes) lives with, as Herzog’s Bad Lieutenant put it, a simple purpose guiding her through life. Harley’s a heroin addict living in New York City, a young woman whose life consists of finding money or other means through which to keep getting high. There’s a perpetual ticking clock pushing her from score to score, and like most addicts, there’s not even that much satisfaction in the high anymore, at least by the point Heaven Knows What begins. It’s not that Harley’s getting high to take pleasure in the high, so much as she’s getting high so that she doesn’t have to deal with the agonies of being sober in between.

Where many narratives about drug addicts, even the good ones, tend to come from an outsider’s perspective, inevitably leading to a sort of “drugs are bad, m’kay” posturing most of the time, Heaven Knows What takes a virtually anti-narrative, documentary-style approach to the addiction story. It’s completely immersed in an addict’s world, in the flophouses and makeshift homes, in the kinship born from mutual desperation and the devastation that can come if ever you make the mistake of getting a little too attached. It’s a disorienting, often brutal, haunting film, as emotionally naked and deeply empathetic a portrait of addiction as modern cinema has seen.

Early on, Harley gets in an especially brutal fight with her on-off lover Ilya (Caleb Landry Jones), the kind that suggests this is a regular occurrence in their lives. The first few minutes function as a microcosm of their relationship; over a disorienting synth score assembled by Isao Tomita and Ariel Pink, Harley and Ilya kiss furiously on the sidewalk, a gesture at once hedonistic and violent, less romantic than desperate and consumptive. Before long Harley’s demanding that Ilya take her suicide threats seriously, to which he responds with laughter and derision right up until the second she opens a few veins right in front of him. This is just part of their life together.

But this isn’t an inciting incident in the manner you might expect. Heaven Knows What is far more concerned with the textures, sounds, locales, and endless half-slurred negotiations of an addict’s social and societal ecosystem. With her dealer and occasional ally Mike (Buddy Duress) in tow, they run all manner of hustles, from stealing energy shots by the gross from stores to re-sell them to street vendors to begging on sidewalks to posting up in fast food restaurants for a few minutes of shelter and respite until they’re chased off into the night again. The film is immersed in the fine details of squalor, the struggles of looking for a place to sleep that won’t end in robbery and, above all, where the next little white bag will come from.

Holmes is spectacular in a performance that’s all the more deeply painful for its close, intimate connection to her own troubled life. Where Jones plays Ilya as a monster fully subsumed into the lifestyle and uninterested in anything more, Harley’s still wondering if there’s something else. Her addiction often seems to be less rooted in a continuous need than it is the twin evils of habit and compulsion; when Harley actually gets to have a few minute of stillness, a life emerges from her, one illustrative of how her light hasn’t yet been snuffed out as Ilya’s has, as it has in so many of her contemporaries. She’s deeply vulnerable in so many different ways, and it makes her existence all the more painful to witness.

Heaven Knows What immerses itself in the universe in part due to the cirumstances of its creation. Co-directors Benny and Joshua Safdie developed the film specifically for Holmes; it’s based on her memoir, which the Safdies encouraged her to write when they met years ago and Holmes was still involved in the life. Its experimental flourishes lead to a certain hazy disorientation, one in keeping with the endless transience of its subjects. Much of it is shot on the streets of NYC, and the fly-on-the-wall intimacy of it all pushes the film into the realm of the vérité; one of its more affective minute details is the way in which passersby desperately attempt to avoid everybody onscreen as brusquely as possible. In many ways, it’s a film about the street stories so many of us actively choose to ignore, a film about the contexts that lead to shouting matches on the sidewalk, to a frail young woman begging for change or committing light theft. It’s a deeply humane work, one that doesn’t condescend or moralize, and ends up capturing its subjects more faithfully than most works of film, documentary, or narrative possibly could.