Live Review: The Kids in the Hall at Chicago’s Vic Theatre (5/14) 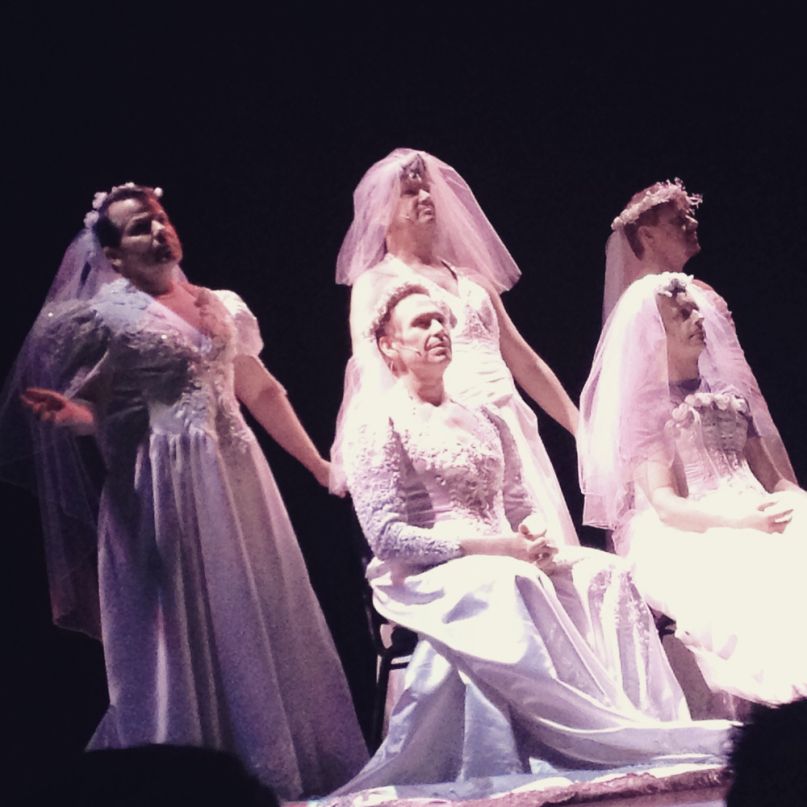 Vintage laughs were had at Chicago’s Vic Theatre Thursday night as The Kids in the Hall stormed the stage. The fabulous fivesome — Dave Foley, Bruce McCulloch, Scott Thompson, Kevin McDonald, and Mark McKinney — arrived in an assortment of outrageous wedding gowns, pleading for wild eccentricities that eventually lead to the conclusion that, yes, gay marriage was something worth supporting. From there, the iconic theme song by Shadowy Men on a Shadowy Planet cracked open a nostalgic night of self-deprecating brilliance and timeless comedy that insisted the Toronto troupe hasn’t lost their touch.

You name it, they brought it: Thompson’s Buddy Cole, martini in hand, delivered another scorching monologue (this time, he lamented the terror and horrors lost on this generation’s gay youth); McCulloch and McKinney sang about their great folk hero, Running Faggot; Foley’s Country Doctor offered his pie-loving diagnosis; Thompson defended his “Salty Ham”; Foley proved he’s still all chummy and positive for menstruation; McCulloch’s Gavin returned torturously precocious; while McKinney’s Mr. Tizick continued to be the divine fan favorite with his trademark head-crushing and scathing closing remarks.

It wasn’t all just a dusty rearview mirror, though. The Kids also penned some new sketches and introduced a few newish characters. A couple really, really worked, like McCulloch’s Superdrunk — seriously, can anyone do a clumsy suit better than, Bruce? — who stumbled across the stage asking a series of comical criminals (all played by McKinney): “What’re you lookin’ at?” It was just stupid and simple enough to match the quality and design of their filmed vignettes, and it sent the audience into a storm. Also hilarious was McDonald’s awfully-sung retelling of the troupe’s rough and storied past, which oozed with self-pity.

A couple misfires included the predictable, one-note new baby skit and another spiraling story involving a blueberry tart. The latter was saved when the troupe repeatedly broke the fourth wall and went off-script, laughing behind their hands and calling out erroneous blocking. This would haunt many sketches, but it was also the most charming aspect of the night. It proved that they’re still just a bunch of screwballs having fun together without any sort of pretension. During the Country Doctor bit, Thompson could hardly contain himself as Foley started fondling McCulloch, and the feeling was quite contagious.

But really, what do they have to prove? They’re all fiftysomething comics with their past glories long behind them, and that’s okay. Their crossdressing, gender-bending, ribald humor, which not so long ago challenged the way mainstream audiences approached topics and themes of counterculture (especially issues of homophobia and bigotry), now thrives freely in today’s crop of comic offerings. That was all them. They know this. The critics know this. The fans know this. So, they likely see this as nothing more than a big ol’ celebration of their ingenuity. Or, a way for Dave to keep paying off his legal fees.