King passed away in Las Vegas at the age of 89 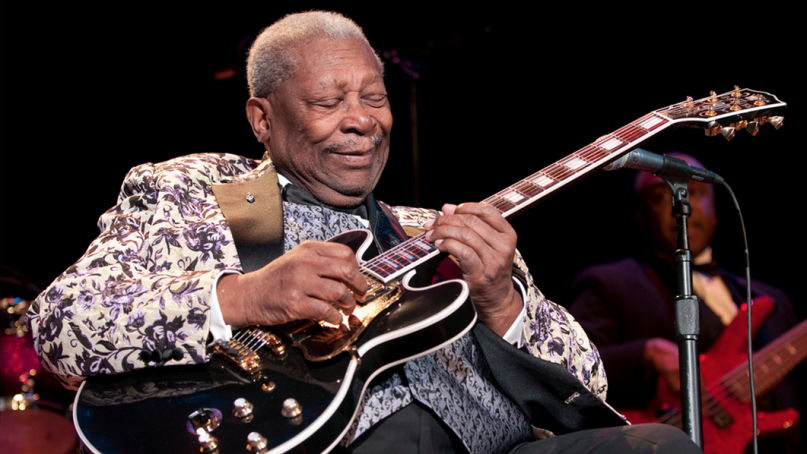 BB King has died. The legendary blues guitarist passed away Thursday in Las Vegas, his attorney confirmed. He was 89 years old.

Riley B. King was born to sharecropper parents on a cotton plantation in Mississippi in 1925. Learning the fundamentals of the blues from his mother’s cousin and blues legend, Bukka White, King began his career in music as early as twelve years old, when he got his first guitar. In his earliest days as a musician, King also disc jockeyed at WDIA, earning the nickname Beale Street Blues Boy, eventually whittling down to Blues Boy before becoming the more familiar B.B. With a playing style that borrowed from the likes of legendary bluesmen such as T-Bone Walker and Blind Lemon Jefferson, King adapted those men’s styles, integrating string bends and a left-hand vibrato that resulted in a focused yet complex sonic signature akin to vocal-like inflections. Over time, his style of playing would become one of the most identifiable styles in the medium and an indispensable component to hundreds, if not thousands, of future guitar players, especially in the rock canon.

While a bluesman through and through, King’s music blended myriad styles and genres including blues, jazz, swing, jump and even mainstream pop. In 1970, King even managed to cross-over onto the pop charts with his take on the classic Roy Hawkins tune “The Thrill Is Gone”, a song that today rests comfortably on Rolling Stone’s Greatest Songs of All Time list(s), though it tends to ebb and flow as to its position with each subsequent publication. Today, we wouldn’t think twice at an R&B performer charting simultaneously on the pop charts, but in 1970, it was a rarity to see a blues artist anywhere but on the blues and R&B Charts. The success of “The Thrill Is Gone” was capped off when King won a Grammy for the song, one of 15 Grammy awards in his career, giving him the distinction of having the most Grammy wins in the blues genre.

Honored with a Recording Academy Lifetime Achievement Award in 1987, that same year saw King inducted into the Rock and Roll Hall of Fame, a full seven years after his induction into the Blues Hall of Fame. The following year in 1988, King teamed up with the biggest band on the planet at the time, U2, for the single “When Love Comes To Town”, featured on the Irish group’s heralded Rattle and Hum.

While his work with U2 or even with Eric Clapton in 2000, on their album together Riding With the King, may have put a spotlight on him to the uninitiated, King was no stranger to strong collaborations, working with Bobby Bland, Johnny Ace, The Spinners, The O’Jays, The Crusaders, John Lee Hooker, Etta James and KoKo Taylor at various points throughout his career. His earliest recordings were even produced by Sam Philips years before Philips’ own Sun Records was even a dream. However, of all the musicians that King had the pleasure to either work with or simply know, his favorite was Frank Sinatra. King has spoken many times to how Sinatra helped to open doors for black musicians, and it was Sinatra who got King into his first gigs in Las Vegas during the heyday of the Rat Pack in the 1960s.

On May 1st, 2015, King announced that he had entered hospice care. At 89 years old and a long-time sufferer of Type II Diabetes, the disease finally gained the upper hand on Thursday. With the passing of this legend it may be tempting (and even perhaps a bit cliché) to use his biggest song’s title, “The Thrill Is Gone”, as a title to his eulogy, but personally, I prefer to take a song title from King’s favorite album, Sinatra’s In the Wee Small Hours, an album King listened to every night before falling asleep. With regards to losing King, Sinatra’s album’s penultimate track says it all – “I’ll Never Be the Same”.