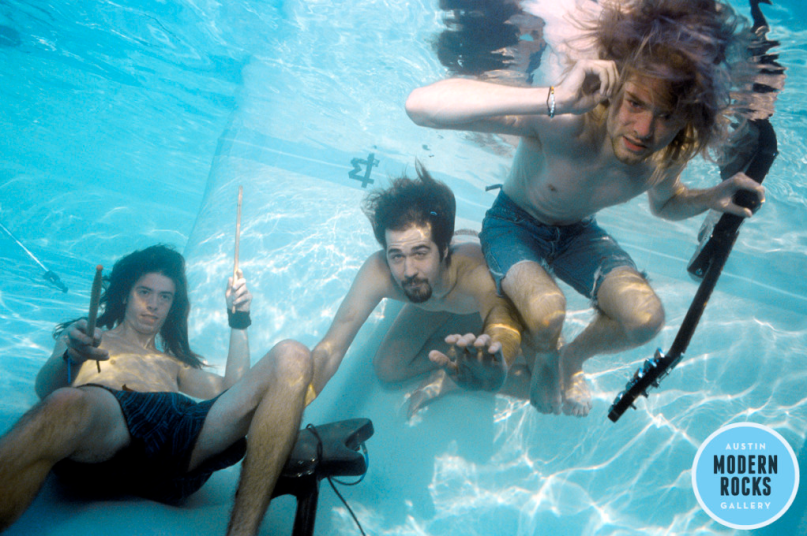 Photographer Kirk Weddle is most well-known to Nirvana fans as the man who shot the famous baby-in-the-pool photo that graces the cover of Nevermind. But that image isn’t the only one Weddle captured for the band. On October 28, 1991, Kurt Cobain, Dave Grohl, and Krist Novoselic met up with the photog at a Los Angeles pool to take some promo shots based on the already-well-recognized cover image.

“I remember Kurt was like, ‘Fuck! I have to get in the pool?’” Weddle recalled. “He was not a water guy at all.” Making matters worse, the shoot was at 10:00 a.m., the weather wasn’t prime for swimming outdoors, and the band had just gotten off tour. Cobain was so beat he even took a nap poolside.

Even so, Weddle managed to capture nearly 200 images of the band in and around the water, even with their instruments. For years, many of these pictures have remained unseen. “I’ve just kept them stacked in a closet, unorganized,” said Weddle. Recently, however, a few appeared in Montage of Heck, and Austin’s Modern Rocks Gallery has made many available for sale.

Take a look at some of the pictures in the gallery below, and head to the Modern Rocks Gallery website for more and to place an order.