Florence and the Machine – How Big, How Blue, How Beautiful 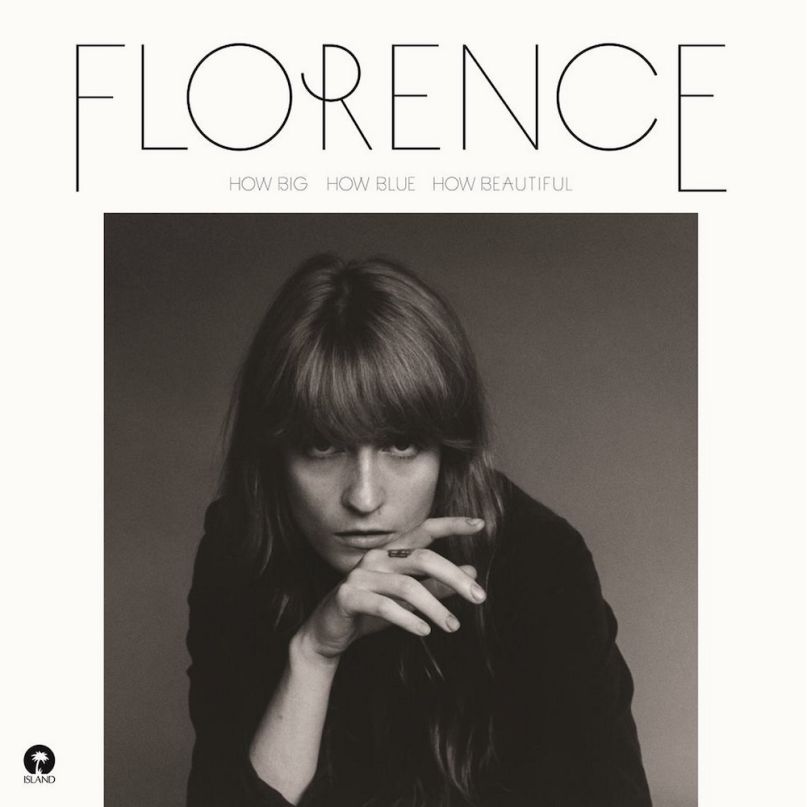 No one does pop grandeur quite like Florence and the Machine. It’s an increasingly soulful grandeur, too. Florence Welch, who, along with her band, was already releasing soaring anthems like “Dog Days Are Over” at just 22 years old, goes for exhilarating sonic force six years later on How Big, How Blue, How Beautiful, the lovesick third Florence and the Machine album. Whether it’s the stomping guitar riff that kicks in on lead single “What Kind of Man” or the three-dozen-piece string and brass section that Goldfrapp’s Will Gregory arranged to take the title track to new heights, HBHBHB has moments that thump you over the head with sound. Welch, though, has also reached a new level of eloquence in her writing, making her a more complete artist than ever. It’s why HBHBHB is the strongest Florence album to date.

Compared to the first two Florence albums, 2009’s Lungs and 2011’s Ceremonials, HBHBHB carries more personal weight from song to song, and it does so with more fragility. Welch will always thrive in the spotlight; her rich, arcing singing voice remains a wonder to behold, and she’s an energetic performer to boot (too energetic, maybe). HBHBHB, though, has a remarkable sense of dynamics, opting for quiet nearly as often as it goes for grand theatricality. Producer and occasional co-songwriter Markus Dravs (Coldplay, Björk, Arcade Fire) wanted to strip these songs down as much as possible, and it worked. The finer points of Welch’s artistry are in focus now more than ever.

Among the relatively quiet moments here are the gently drifting, vaguely bluesy “Various Storms & Saints” and the similarly low-key “Long & Lost”, both of which eschew the hooks of Florence and the Machine’s most memorable songs. Even the title track sits relatively still at first, before those trumpets bloom heavenward. These aren’t the album’s most telling moments, but they go a long way toward explaining the shift Welch and co. have made for this album; whereas Ceremonials was almost relentlessly huge-sounding, HBHBHB is more restrained. Sales expectations are high (as Avery Lipman, co-president of Republic Records, bluntly told The New York Times), but this album will do big numbers while hewing closer to Björk’s Vulnicura or Lykke Li’s I Never Learn than stereotypical, unadventurous pop radio fare.

Like those albums, HBHBHB is principally focused on a doomed romantic relationship, and Welch’s language is hitting in direct new ways (though there are still plenty of biblical allusions here). “What kind of man loves like theees?” she seethes on “What Kind of Man”, and her vitriolic emphasis on the last word is already legendary. On “St. Jude”, a pile of quick-hitting rhymes is constructed as if to reflect the tangles of Welch’s personal life: “And I’m learning, so I’m leaving/ And even though I’m grieving/ I’m trying to find the meaning/ Let loss reveal it.” Her search for clarity may not be over, but by the end of HBHBHB, it’s clear she’s made progress, growing more honest and comfortable with herself.

If ultimate redemption for Welch would come from her male subject hearing these songs everywhere he goes, then HBHBHB very well may prove to be revenge. It has songs destined for repeat plays today, five years from now, whenever. The album’s opener, “Ship to Wreck”, driven by jangly acoustic strums and a steady backbeat, serves this purpose right away with its pre-chorus and chorus (“Did I drink too much, am I losing touch, did I build a ship to wreck?” Welch asks). “What Kind of Man” is an absolute steamroller, from that burning guitar riff to the group shout-along of the chorus. Later, the feather-light “St. Jude” drones steadily, its title becoming an unshakeable hook. Welch’s voice on these songs and others ranges from soothing (as with the soft humming of “St. Jude”) to booming (as with the snarling of “What Kind of Man”), but it’s never less than impressive.

With enough songs and albums, musicians who can be considered a “singer-songwriter” eventually embody certain themes. They come to stand for something (or many things). With HBHBHB, Welch has added a considerable amount of feeling to her catalog, and it should go down as one of the year’s most well-crafted personal statements. When everything comes together like this — in other words, when Welch’s powerful singing, the bold instrumentation, and the lyrical devastation all cohere — it’s apparent she’s among her generation’s most deserving superstars, maintaining a stunning balance of technical mastery and sensitive lyricism.