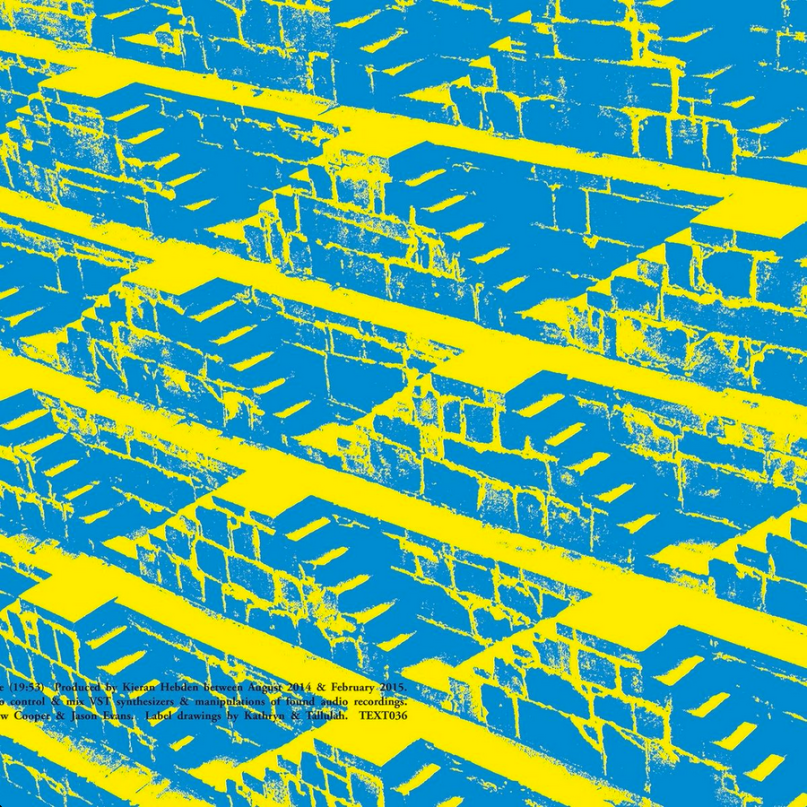 Kieran Hebden, the 34-year-old English producer behind Four Tet, may be just outside the millennial age bracket, but he mirrors their lifestyle with unintentional ease in aimless videos of himself at the post office and tweets made solely of emojis. Often, he deconstructs the wall separating fans and artists, offering followers spots on his Boiler Room guest list just because. On Morning/Evening, his eighth full-length, that carefree attitude manifests in the album’s wandering construction. Given time, though, Morning/Evening reveals details more in touch with Hebden’s internal thoughts than any of his previous material.

Made in seven months on his laptop with Ableton Live, VST synthesizers, and found audio recordings, Morning/Evening is more than sample slices pressed over muffled house music. It’s Hebden’s ode to the wonder of waking up and the magic of going back to sleep. Both of the album’s tracks shy away from heavy-hitting beats or prominent melodies. Listen closer, though, and the slow transitions within each 20-minute song hint at hidden structure. In a way, this could be Hebden’s response to the lack of compositional focus on 2013’s Beautiful Rewind. No matter how colorful and smooth, the album’s singles failed to pack emotive bends with the same style as his past releases. On Morning/Evening, Four Tet zones in on two times of day, two songs, and two styles. It’s certainly not the nine-course meal of There Is Love In You, but it indulges in the playful basics of elemental style done right.

Morning/Evening draws flavor by sampling Lata Mangeshkar’s “Main Teri Chhoti Behana Hoon” from the 1983 film Souten. In “Morning Side”, the sample translates into complex emotions. While the campy film scene blends major keys with tragic visuals (the song’s sad version is sung during a funeral, while the “happy” version is sung through tears after an abandonment), the A-side track mixes Bollywood melodrama with humming clarinets, lush orchestral strings, and careful chimes. Even when the song breaks for an industrial section of terse handclaps and a pattering of sour synth notes, it remains optimistic, as Four Tet always manages to do. He clarifies muddled emotions in a language many of his listeners do not speak.

The album’s content holds ties only to its creator, and family plays a larger role than surface-level sounds imply. As Four Tet, Hebden has rarely, if ever, made connections to his genealogical influences, particularly those of his South African-born Indian mother. A tweet stating his parents’ approval of the new album is less about the aww-factor and more an indication that Hebden is revealing his identity and history through sound; the Bollywood samples are so simple, they recall childhood more than anything.

By blending the vocal samples into the background midway through “Morning Side”, Hebden recreates the lucidity of waking up to a sunrise poking through the shades. The shards of found audio recordings, rainbow synthesizers, and deep, elongated strings ebb and flow throughout. There’s no want for editing here. Synth notes fall offbeat sporadically, keeping you alert though backed by whirring drone.

If “Morning Side” is nostalgic, then “Evening Side” nods to adulthood, as Hebden guides through a sleepy, meditative structure. The track begins quietly, sound looped in reverse while shorter vocal samples call out like the echoes of a wounded bird. Then the vocals evaporate in favor of glittering keys mimicking wind chimes. Before cutting out completely, the song juts back in with a parading tempo, piling up until it becomes the kind of house music that floods clubs. Morning/Evening was uploaded in advance of the scheduled July release to better “celebrate the summer solstice,” and the album’s second half beautifully soundtracks summer’s evening hours.

Morning/Evening is 40 minutes of vivid, dreamy, culturally challenging work that reflects not only on the comforts of family, but the cleansing nature of greeting the day and sending it off. As absurd as the album’s announcement was (Hebden spun vinyl in an Instagram video wearing a frog onesie), it encourages us to keep in touch with our childhood however we can. Hebden has done what he does best: create an atmosphere so encompassing that you lose sight of wherever you are while you’re listening.

Essential Tracks: “Morning Side”, “Evening Side”