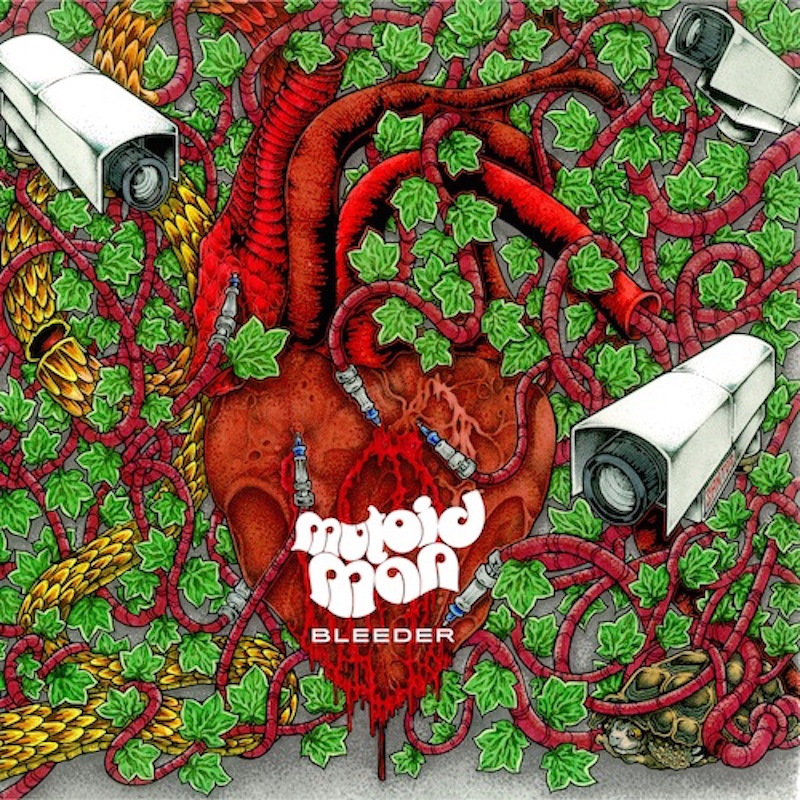 Complaining about a band cleaning up their production has become the critical equivalent of “old man yells at cloud.” It’s a pointless critique usually steeped in some vague sense of purism — the idea that if something is less raw or less heavy, then it’s somehow less “real.” Whatever that means.

Bleeder, the full-length debut from Mutoid Man, is certainly less raw than their 2013 EP, Helium Head, an 18-minute mine cart ride that was as fast, convulsive, and stubbornly melodic as you would expect from a supergroup made up of the guitarist/vocalist of Cave In, the drummer from Converge, and the sound guy from Brooklyn metal bar Saint Vitus on bass. Bleeder takes on all these traits to a degree, but with a clearer separation between the gnarled instrumentation and Steve Brodsky’s vocals. This divide results from an increased emphasis on clear-headed singing rather than the constant yowl Brodsky put forth on Helium Head.

That doesn’t make the album less authentic, but it does make it slightly less powerful. Opener “Bridgeburner” starts off with some appropriately filthy droning, a ragged quality that lasts through the rise of Nick Cageao’s low-end and Ben Koller’s drums, but disappears when Brodsky comes charging in. Suddenly, the song sounds less live, immediately filing down its sabred teeth. Most of the tracks follow a similar formula, with some leaping headfirst into wilder vocal territory whenever the time signature changes — which happens quite frequently. But when Brodsky starts rasping in “Reptilian Soul” and screaming in “Dead Dreams”, it doesn’t leave you with an awakening burst of energy, but a puzzling feeling that we’re suddenly in a different song.

There are a handful of points at which the vocals and arrangements get tightly welded into a nasty scud missile, probably one that’s painted like a shark. Brodsky finds a seamless ascent from muffled tone to banshee wail on “Surveillance”. The closing title track feels prehistoric in the way it lumbers: Brodsky shrieks like a pterodactyl as Cageao and Koller ominously rumble until the whole mess goes extinct. On the less lizard-brained cuts, there’s still the intentionally (and wonderfully) boneheaded lyrics about violence, lust, and video games, not to mention Brodsky’s endless cache of riffs. Bleeder might not melt your face off, but it will definitely burn it. Badly.