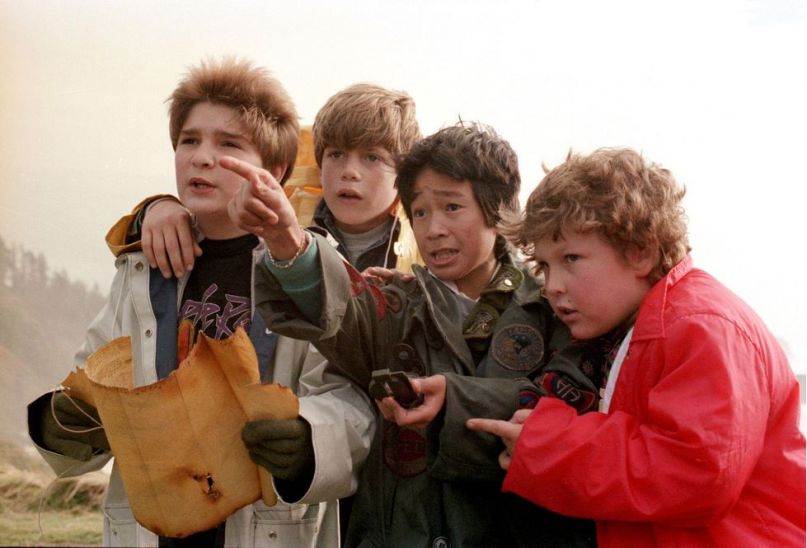 Thirty years ago today, one of the more important movies ever made specifically for kids was released. And yeah, it’s The Goonies. Hear me out. Richard Donner’s 1985 adventure film (how often do we describe films as such anymore, by the way?) about a band of misfit preteens and teenagers negotiating the perils of malfunctioning secret weapons, on-the-run mafiosos, aggressive land redevelopment, an unseen octopus, a lost pirate treasure, a series of life-threatening booby traps, a basement-dwelling, caramel- and peanut-loving man-creature, friendship, and puberty, among other things, stands as one of the best examples of a movie that you love as a child and then are pleased to learn is actually still good when you’re an adult. (Poor Good Burger. It never passes this test.)

It’s also one of the more poignant movies made specifically for kids and the rare family film that rather honestly captures the utter helplessness of being a kid. Most movies aimed at a younger audience have the tendency, at least whenever the harder realities of the world come up, to either downplay them or to diminish them to such a point where they’re more palatable for an audience that can’t understand the moral nuances of concepts like injustice or, say, forcible eviction. It’s the latter that hangs over The Goonies, even as it starts off as a pretty average depiction of a day in the lives of a bunch of misfits living in Astoria, Oregon. The film’s setting allows for a constant gloom that’s as illustrative of how its characters’ imaginations blossomed as it is the low-hanging dread over their futures; in a nondescript town with seemingly little to offer its restless young boys, they come up with everything from elaborate Rube Goldberg devices to fabricated tales of sex, a primary interest of many of theirs that they hardly know how to articulate.

If you’ve seen the movie, let’s skip ahead. If not, a quick primer: one day, Mikey (Sean Astin, so utterly babyfaced) finds a treasure map in his attic, alleging that the lost treasure of the famed pirate One Eyed Willy (the name itself sounds like a dirty-minded 12-year-old’s creation) is still somewhere in Astoria. Knowing that his parents and all his neighbors are facing eviction by the local country club so that their houses (the Goondocks) can be torn down and replaced with a new golf course, Mikey and his friends set out to find Willy’s treasure and do what their parents seemingly can’t: keep them all together, the way they want.

From its first scenes of a faked prison suicide by hanging and subsequent police chase, The Goonies establishes itself as a different kind of movie about kids. Because films about kids are written by adults with few exceptions, there’s always a detached perspective, a sort of head-patting patronization by people looking at these little people with their little problems. The Goonies, on the other hand, is a movie about how scary the world is when you hit the age where you’re old enough to know about its evils but far too young to truly grasp them or, more to the point, find your own way to deal with them. You exist beholden to the whims of others. If your adult moves, you move. If they quarrel, you can only get as far as shutting yourself in your room. Or you run away, and what? Where do you go? Probably home, after a few hours.

Even the film’s many trials and lairs harken back to a time when every minor failing was the most severe failing imaginable, to some kids. Disappointment and failure hang heavy over the whole of The Goonies, and it’s something that resonates at any age. When Andy (Kerri Green) struggles to play a bone-built pipe organ under threat of killing all her friends, it’s not much of a jump from that moment of panicked stage fright that ruins a recital in front of the whole family. Their inability to tear apart a set of pipes and push onward in the maze? Sure speaks to the ways in which the Goonies aren’t exactly a band of athletes. In fact, if anything, the film makes a stark contrast between the callous apathy of the local affluent jocks and everyone else, which is as much one of the truly lingering aesthetic commonalities of all 1980s film as it is a reminder that this is a movie about the kids who don’t usually get movies made about them, who get to be the weird sidekick in other, cooler kids’ stories, one at a time.

One of the film’s most memorable sequences also makes for the true center of this thesis. After finding their way to the bottom of the local wishing well, admittedly the most on-the-nose metaphor imaginable, the group slowly starts to realize that maybe fairy tales are fiction, wishes don’t come true, and the richest people in the room might well win the day after all. It’s a perfect illustration of the moment that every kid has to have at one point or another in their lives, the one when they realize that not all people live the same life and that a lot of other kids probably have better, more comfortable lives than they do. And you can get old and let that curdle into resentment and dreams gone unfulfilled, or you can adapt and declare, as Mikey does, that “down here, it’s our time.” You can change your future.

And perhaps that’s the most tragic think about revisiting The Goonies as you age. When you’re a kid, it speaks directly to your concerns. As you age, the appreciation for it is shaped more by wistful nostalgia, by the remembrance of a time when you believed that this scenario could play out, that you could go under that sketchy, closed-down restaurant on the edge of town and find so many precious jewels that none of your friends would ever have to move away and you’d never have to watch your parents get worn down by the economic realities of middle-class America. The Goonies is a fun adventure film, sure. But it’s also a film that understands the ways in which even something as idyllic as the imagination of a child is shaped every day by the terrors and pressures of the rest of the world.