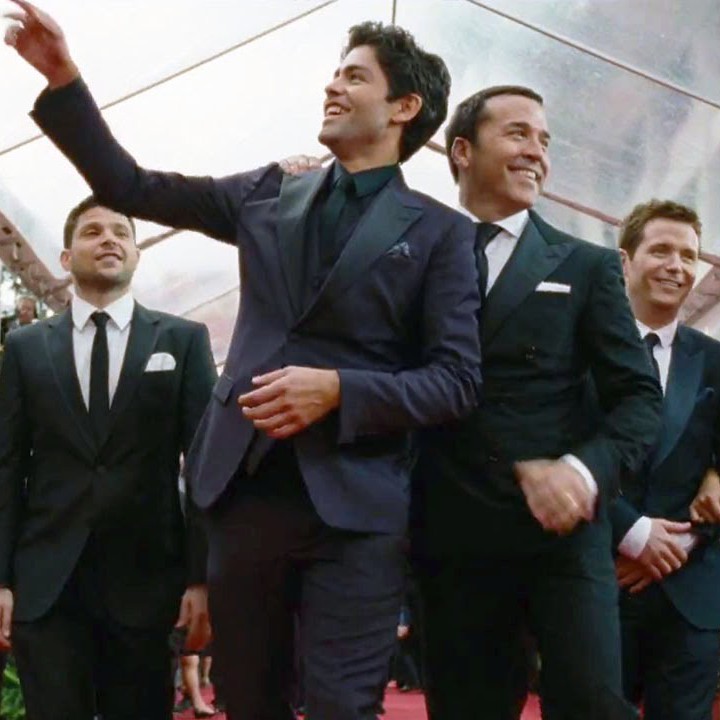 In case you missed it, creator and director Doug Ellin has resurrected his beloved HBO series, Entourage, as a feature-length film starring his regular cast of Hollywood hotshots, specifically Kevin Connolly, Adrian Grenier, Kevin Dillon, Jerry Ferrara, and Jeremy Piven. As expected, the film picks up right after the eighth season and focuses on Vince’s seemingly cherrypicked desire to direct his own film. If that’s not meta enough for you, then perhaps this shall do…

ARI GOLD, sharply dressed and bringing all that Hollywood swagger, walks down the sun-baked studio lot checking out all the stars. Some smile, a few frown, and many wave. 10x NBA All-Star CHRIS BOSH walks by and gives him a pat on the shoulder. He looks like he wants to talk, but Ari’s all business.

VINNIE CHASE, Aquaman and Pablo Escobar himself, is staring blankly at a screen. A bowl of fruit, uneaten of course, sits idly by as big brother JOHNNY “DRAMA” CHASE struts by and rubs his shoulders. The scene is incredibly tense.

VINCE
It’s pretty awful, you have to admit.

DRAMA
Baby bro, you should not be sweatin’.

ARI
This was bound to happen. We’ve been gone so long
and the time’s have changed. You can’t win them all,
you can only win so many, and you’ve won your share.
(a beat)
People love you Vince. I love you. So, who gives a
whore’s ass what some dumb, Jim Belushi-motherfucker
in Chicago thinks about your movie! I’m willing to bet
my $450,000 Ferrari that he’s just some fat schlub,
jerking off to episode after fucking episode of Game of
Thrones, while his mother screws the mailman next door.

ANDY RICHTER walks by shaking his head. Ari waves him off.

Drama’s in the background working out his sick arms. Vince is still staring at the screen.

VINNIE
I’m here, Ari.
(a beat)
It’s like he doesn’t even know me. He says, and I quote, “The
stakes are never too high for Vinnie Chase, who continues to
stumble around the good life of Hollywood, chasing the same
underwritten girls, bonding with the same flashy stars, while
being given the same A-list treatment, despite never showing
any actual work on his part or even the slight bit of pathos.”

DRAMA
Pathos? My life’s all about pathos, bro.

VINNIE
(ignoring him)
He also complains about the lack of urgency. He says the
film is a retread of past trials and conflicts, save for an idiotic
running gag about Emily Ratajkowski and an equally lame
and tedious subplot involving E’s frivolous child with Sloan.

E
Vinnie, will you stop reading that garbage already?

ARI
For once, I actually agree with that Willow son of a bitch.

Drama is now reading his phone, while E paces back and forth. He’s visibly tired of this charade.

VINCE
(still reading)
“Whatever purpose Vince’s entourage might have served 10
years ago has long been buried for good in the Hollywood Forever
Cemetery. This isn’t a commentary on Tinseltown, but a tepid
bachelor party that’s gone on way past the wedding.”
(a beat)
He then rambles on and lists all of my friends that he calls “silver
screen fodder.” Bob Saget, Jessica Alba, Gary Busey, Turtle’s
boy Mark Cuban. Ari, maybe I’m out of line but … I thought we
really brought everyone the goods. Didn’t we all have fun?

closing his eyes and pinching the bridge of his nose.

E slouches some and kicks back in the chair. It’s hard being so honest.

E
Vince, life isn’t just about hot girls and doing what you want.
Even the most successful stars are susceptible to stakes.

DRAMA
(smirks)
Speaking of steaks, we should definitely hit up the Palm soon.

VINCE
There were stakes, E. I never directed before. I direct now!

E
And how hard was that, Vince? You had to call Ari twice.

thumbing through his annoying messages from “Gaysian Lloyd.”

VINCE
Look, all I’m saying is that there was more than just tits and ass.
(beat)
We had romance…

E
Vince, how many times have we seen Turtle hook up? How many
years did he waste on Jamie-Lynn Sigler?

TURTLE
(off screen)
Too many.

At the door is SALVATORE “TURTLE” ASSANTE. You can almost hear the applause. Noticeably, there’s a rather large series of bruises all over his face. But he’s thin.

DRAMA
What’s wrong with you T? Your face looks as bad as Vince’s review.

DRAMA
(taken back)
Let’s see if you like your breakfast tomorrow.

Vince gets up and starts running his hands through his hair. This means trouble.

VINCE
So, what would you have me do, E? What? Another Aquaman?

E
I don’t know. But whatever you do should be a challenge.
For you. For everyone.

VINCE
Maybe we should just go back to Queens.

E
We did that already. Remember?

VINCE
What about an addiction story?

E
You persevered. Just as we knew you would.

Vince lays down on the couch. He looks catatonic.

DRAMA
(rubbing his chin)
How about we try to get in one of those Star Wars sequels, bro?

DRAMA
I read for that part seven times. Son of a bitch, Lucas.

Vince looks at a framed portrait of the gang at the Golden Globes. They’re so happy. They have it all.

VINCE
Well, I guess there’s really no place else to go, huh?

E
Jesus Christ, Vinnie. We should start calling you Drama.
(stands up, looks at screen)
Okay, what this Roffman guy says is bullshit. Mostly. But,
he does have a point. We once had a purpose. We were
supposed to show everyone what this life is really about.

VINCE
(sitting up)
Guys, shut up. What E? What is it about?

E
Well, people looked to us, and saw that, despite all the glitz
and the glam, we were still a group of friends, more invested
in our bond than anything Hollywood could offer.

DRAMA
Nothing’s changed on my end. I love you guys.

E
Yes, but that story only goes so far. It’s been told.

VINCE
(smiles)
You’re right. We should have left this place years ago.

In a classic Turtle move, Turtle opens a bottle of his expensive Avión tequila. It’s so early in the morning and yet they’re all ready to drink and celebrate — only in Hollywood.

He passes around the bottle. Everyone takes a swig. Drama proves he’s a man by taking three swigs.

DRAMA
You know, I bet Jimmy Fallon could use a hype man. We go back.

VINCE
E, I never doubted you for a second.

E
Everything will work out fine.

They all smile and the vibes are palpable. Then…

ARI
(from Vince’s phone)
Hey, hey, hey — unless your name is Brian Williams, there’s no reason
for you to retire, Mentos. You won’t fucking believe what just came in…

Ari is now standing over his desk. He’s holding a mysterious package in his hands. His eyes might as well have money signs in them. Cha-ching. Cha-ching, indeed.

ARI
Vincent fucking Chase, how would you like to be the next James Bond?

his smile goes all the way up to his ears. There’s no way he’s leaving Hollywood. Ever.

The music of tUnE-yArDs’ “Real Thing” begins, as we…