Film Review: Inside Out 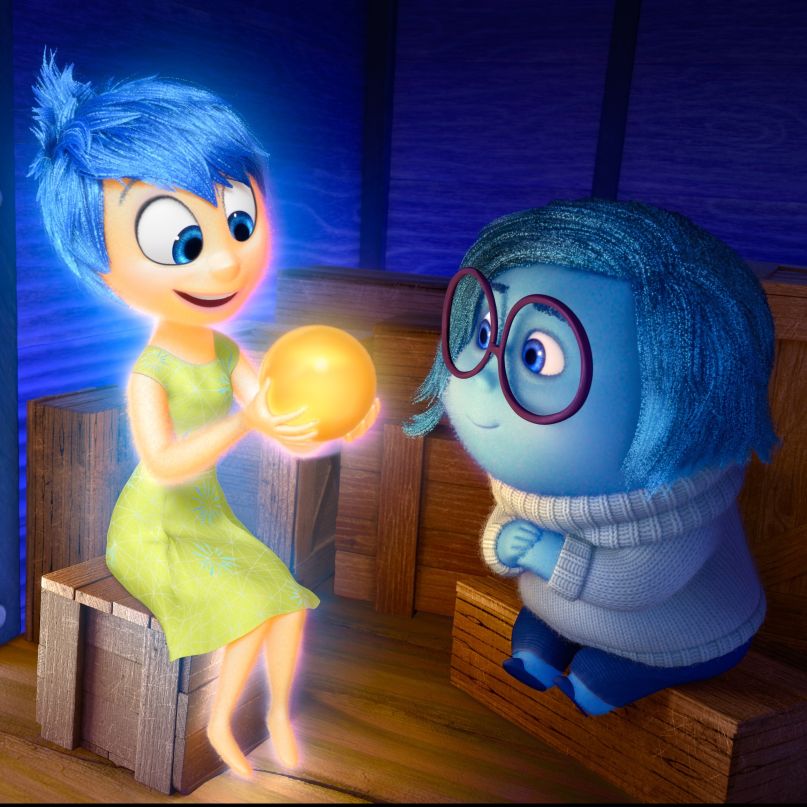 The most lasting Pixar movies are the ones that least fit the Disney mold.

You know what we’re talking about. The song-and-dance numbers, the big-eyed mush, Frozen-type crap? It’s all so … kiddie. The best stuff from Pixar comes from a wide variety of vantages, and uniquely remixes quality concepts into delightful pastiches. The Incredibles was a knock-out hero story that embraced families. Up is like a slap-happy fantasy straight from Studio Ghibli. And now, Inside Out is a head game with some of the cleverest and most creative things on its mind.

Pixar’s 15th film has the emotional intelligence and conceptual innovations of Eternal Sunshine of the Spotless Mind, the interior narrative logic of Inception, and the referential, visual slapstick of Chuck Jones and Friz Freling. But best of all, Inside Out draws on all of those to become an animated delight all its own that’s not just one of the best films of 2015, but a modern masterpiece of soulful animation.

It’s Pixar’s latest prize in the star studio’s filmography, and what a wonderful feeling one has while leaving Inside Out. The film is a fresh and experimental model for all-ages entertainment that nourishes both the heart and mind. You’ll feel so whole, so elevated, so in love with this movie, you’ll want to walk right back into the theater and watch it again.

With Inside Out, Pete Docter solidifies himself as a truly great animator. He and co-director Ronnie Del Carmen have pieced together something wholly unique and memorable. Simultaneously a work of staggering emotional clarity and lively color and humor, Inside Out engages both hemispheres as it dares to traverse one of the scariest places imaginable: the mind of an 11-year-old girl.

Riley (Kaitlyn Dias) is the new girl in class. She just moved to San Francisco from Minnesota, and is coping with the loss of fond memories rooted in her old home: best friends, hockey games, the undying love and attention of her parents. Adults can barely handle that transition, let alone a still-growing girl, and we’re given access to her mind, where her feelings are expressed as characters. We meet her “core emotions.”

There’s the life-saver Joy, voiced by Leslie Knope herself, Amy Poehler. Joy is the de facto leader, keeping Riley at ease as she oversees and tries to suppress Sadness (The Office’s Phyllis Smith in what could only be described as the performance of her career and the movie’s scene-stealer), Anger (Lewis Black, perfect), Disgust (Mindy Kaling, awesome), and Fear (Bill Hader, hysterical). With Riley’s transition, we see Sadness unwittingly take hold as Joy becomes powerless, fearful that Riley may never feel happiness again.

And yet the film goes deeper than that. As Riley is on the verge of a breakdown, Joy and Sadness are unintentionally removed from the forefront of Riley’s mind, and must find their way back before Fear and Anger and Disgust take hold of Riley. Sadness and Joy’s journey gives us a peak into the subconscious (where fears of clowns and broccoli live), long-term memory (where thoughts fade, or crop up every so often, like stupid jingles you get in your head for no reason), and the islands that define Riley’s personality, like Goofball Island and Imagination Land.

And that’s just a fragment of what’s going on in Riley’s head. We’re privy to imaginary friends, sight gags about dreams and pubescence on the level of Looney Tunes, and even the inner monologues of other people. It’s a trippy experience with genuine perspective that literalizes things we often take for granted when we think about a million things a day. Inside Out makes the most of its time, with its ingenious script, Michael Giacchino’s poppy post-Pat Methany score, an ace cast, real emotions to burn, and one-of-a-kind visuals.

The animation could be described as the best of an American style. Riley’s impressively articulated brain draws on everyday kid stuff like clouds and candy and daydreams of boys, and everything plays onscreen as Crayola-colored fantasias and deep gallows within the mind. Riley’s mind is a screwball cartoon heaven, as Docter and Carmen opt for a pastel DayGlo George Seurat pointillism aesthetic. All the emotions in Riley’s head are composed of tiny, glowing, pulsating bubbles, and they create what could only be described as a magical texture that presents the firing of neurons in anthropomorphized terms. Why wouldn’t anger be a cranky, red-faced little jerk with Lewis Black’s voice? He bubbles up when provoked. Inside Out ponders these little details so well, making the movie’s bright palette and design and ideas actually worth the upcharge for 3D.

Somehow everything comes together fluidly, leaving us with a delightful and meaningful piece of populist entertainment. Inside Out knows that emotions are good but complicated things, and that they evolve as we grow and experience life, which is why this film may feel like one grand therapy session that’s been slapped with a PG rating. It’s more than that, though: Inside Out is a superlative work of inspired imagination, one that may very well stay in your mind for a very long time.

P.S. As always, there’s another Pixar short to behold. This one’s called Lava by James Ford Murphy. It’s about love and volcanoes, and set to Hawaiian music. Listen, the geological implications of rising and falling volcanoes is a little startling and confusing, but the short’s cute enough, and $10 says the music will make the rounds at weddings in the near future. Just a hunch.