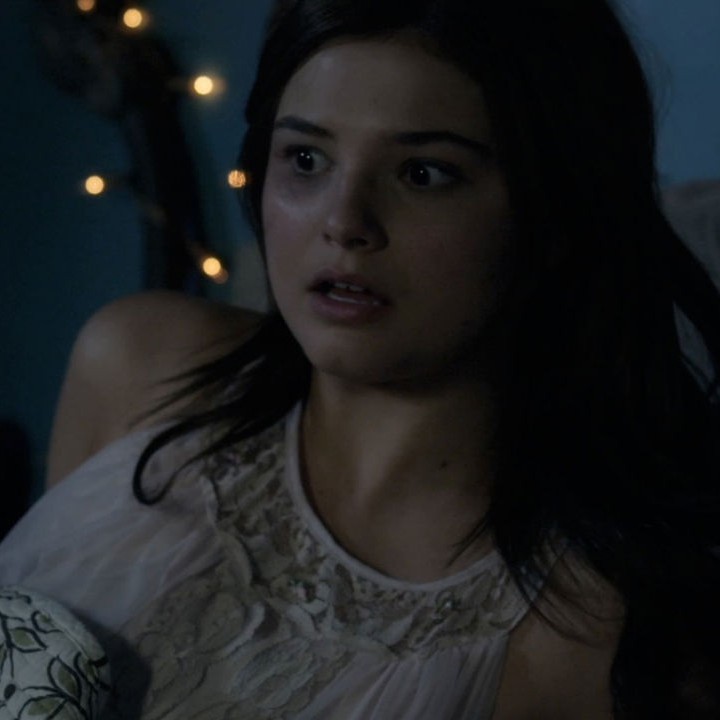 The problem, of course, was that Insidious just wasn’t very good. Both it and its 2013 sequel are as loud as they are dull, trafficking in meaningless jump scares that start to evaporate the second they scorch your eyeballs. They’re more Halloween costume than horror movie, relying on anachronistic aesthetics–candlelit hallways, vintage dresses, dollface makeup, marionettes, the list goes on–to tap into a universally accepted idea of horror, rather than anything truly uncanny.

In many ways, Insidious: Chapter 3 is no different. A prequel to the first two films, it opens with Quinn (Stefanie Scott), a teenage actress, appearing on the doorstep of psychic Elise Rainier (Lin Shaye), who is to this series what Jigsaw was to the Saw franchise: a character that persists long after we watched them die. Quinn wants Elise to help her speak with her dead mother. Elise reluctantly acquiesces, but unwittingly invites a malevolent demon into Quinn’s life, resulting in a life-threatening accident for the girl. The demon, a freaky creature they call The Man Who Can’t Breathe, comes from The Further, an alternate plane that, as we saw in the first two films, is filled with spirits in vintage dresses and doll makeup. To save Quinn, Elise must confront her fears and again brave The Further’s dimly lit corridors.

As in the previous films, every scare is forecast, as every scare has been done before. What makes Chapter 3 different, however, and a good deal better than its predecessors, is its meanness. For this installment, series writer and Saw creator Leigh Whannell takes over directorial duties from Hollywood darling James Wan (The Conjuring, Furious 7), whose sharp eye and evocative tableaux ensures the first films will always be a cut above their countless ripoffs. Wan is the better director by any measure, but Whannell is smart to trade Wan’s measured escalation for something altogether more punishing.

(Read: Why So Sequel? The Endless Nightmare of Horror Franchises)

Yes, jump scares abound, but Whannell lets them linger long after that initial jump. He has no time for fake scares, either. Every piercing squeal of strings signals a genuine threat, the possibility of actual harm. Too often, creatures in series such as these are content to pop in for juuuuust a second before fading into the ether. In Chapter 3, The Man Who Can’t Breathe doesn’t just nudge open a door or turn on a radio; he appears, he confronts, he attacks. It’s breathless, pulpy fun, and it’s in these moments–almost exclusively in the film’s first half–that Chapter 3 is at its strongest.

It’s once the film remembers it has a franchise to uphold that it begins to suffer. The Further is as silly and cliched here as it was in the previous films, and the reappearance of comic relief duo Tucker (Angus Sampson) and Specs (Whannell) is utterly pointless. The entire third act is an overstuffed mess, bursting with unnecessary callbacks, multiple deus ex machinas, and gobs of sentimentality as unearned as they are groan-worthy.

The best thing to come out of the Insidious series is Shaye, a veteran character actress who almost never gets the opportunity to carry a movie like this. Chapter 3’s heart resides in her, and the film’s glimpses into her private life and personal history give the actress ample opportunity to excavate the dark and light inside of Elise. As Quinn, Scott feels more like a bundle of countercultural quirks (Pixies tank, P.J. Harvey poster, A Clockwork Orange) than a believable teenager. Oh, and Dermot Mulroney phones it the fuck in as Quinn’s dad. I don’t even remember his name. Cash that check, Der.

In our mainstream horror landscape’s glut of sequels, remakes, and cash-ins, you could do a lot worse than Chapter 3. Whannel isn’t a hack, and what he lacks as a storyteller he makes up for in fostering sustained tension. But, as with a number of other horror series on the market–Paranormal Activity, Grave Encounters, etc.–it’s the film’s adherence to its own undercooked mythology that proves to be its undoing. As a standalone creature feature, the film succeeds. As a piece of a larger whole, however, it stumbles.