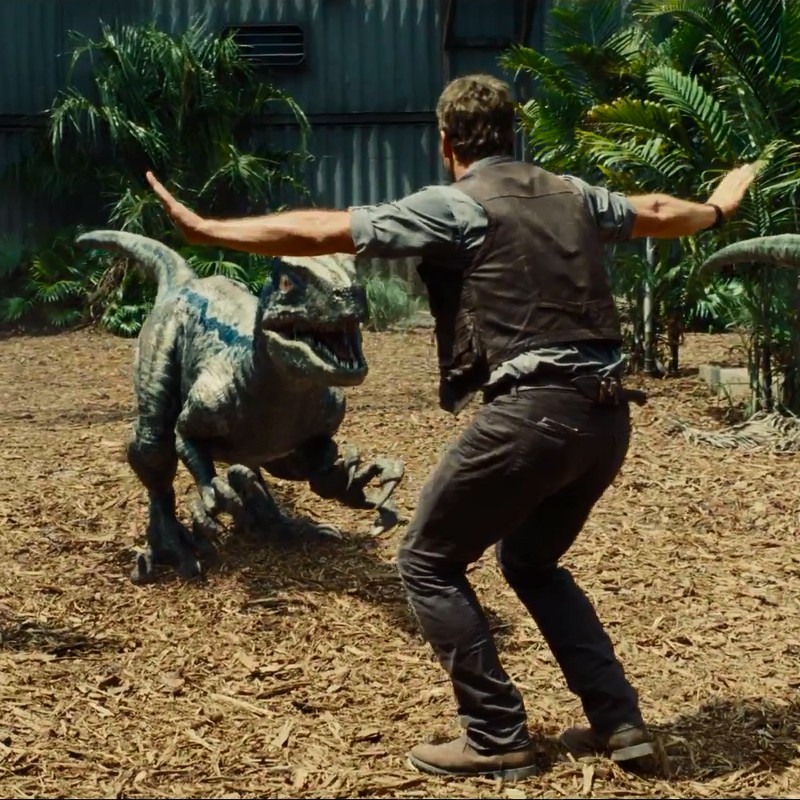 Jurassic World is as much of a jumbled hybrid as its own featured dinosaur. It’s an action-adventure blockbuster that feels very of its time: overstated, overstocked, overblown, and overdone. It’s also sensational, outlandish, preposterous, and downright exhausting. Even worse, this engineered reboot anesthetizes any of the suspense or mystery that Michael Crichton and Steven Spielberg developed decades ago. In its place is a concussion of ADHD chaos and destruction, delivered with the frenetic pacing of a hunted Gallimimus. For over two hours, dozens of action figures with limited points of articulation run away from glossy video game monsters, pretending to be as important and heartwarming as the franchise’s premiere rogues gallery of heroes and villains. All the while, endless lines of exposition pathetically attempt to clone whatever topical science fiction the original carried.

Sadly, the film knows this.

For the third sequel of the Jurassic Park series, director Colin Trevorrow (Safety Not Guaranteed) takes us back to where it all began: Isla Nublar. Gone is Dr. John Hammond, the park’s glitchy Unix system, or the madman’s flea circus dreams and in their place lies a corporate prehistoric wonderland, where Margaritaville, Jamba Juice, and IMAX co-exist alongside dinosaur petting zoos, gyroscopic adventures (featuring safety instructions from the safest host in late night; spare no expense), and one soggy Mosasaurus. It would appear that the ice cream-eating bastard’s vision has finally come to life! If only those greedy evil suits didn’t feel the need to crossbreed all that dino DNA to create a supersaurus called, the Indominus rex. Can you blame them? Attendees are bored with dinosaurs (!) and they want more than what’s essentially a redux of Universal Studios/Islands of Adventure. Don’t you get it? That’s us! They’re talking about moviegoers, you idiots.

(Ranking: The Dinosaurs of Jurassic Park From Worst to Best)

Of course they are. Ever since Chris Miller and Phil Lord made meta bucks with 21 Jump Street in 2012 (and once more with last year’s hilarious sequel), the whole winking, tongue-in-cheek commentary has become the go-to crutch for unnecessary blockbusters. But, at this point, it feels like a goddamn cop out; as if they couldn’t muster up a straightforward sequel without looking straight into the eyes of its audiences and being utterly transparent. Some might call that honorable, but the way it’s conveyed in Jurassic World — and, to be fair, with a number of sequels lately — feels irritating and lazy. From beginning to end, we hear so many obvious barbs at the film’s asinine premise, whether it’s the number of dinosaurs they’ve flooded the park with or the rampant corporatization that has plagued their administration. What was once a clever speech by Jeff Goldblum — “You’re selling it, selling it…” — is now a showy parody.

And that gaudy sensibility factors into pretty much everything else about this film. Sweeping shots, a surprisingly cheap score by the usually great Michael Giacchino, and poppy colors offer a surreal, dreamlike aura to the park’s proceedings, but not in a good way. Cinematographer John Schwartzman (Saving Mr. Banks) tilts as much light as he can on every piece of terrain, which only makes the garish CGI all the more affronting. Though, much (if not all) of the blame goes to the atrocious effects that spit on the late Stan Winston’s Oscar-winning creations and fail to produce one believable dinosaur in the entire film. (Well, with the sole exception of a dying apatosaurus, thanks to its visible use of animatronics, but still…) Just the idea that they couldn’t get the dinosaurs right — inarguably the most integral facet of this entire franchise — should immediately have fans shouting, “Ah, ah, ah…!” Think of it this way: Would you trust a magician if you could see a rabbit poking out of his jacket?

(Page to Screen: A Tale of Two Jurassic Parks)

Not even the characters are tangible. Alpha-raptor trainer (no joke) Chris Pratt does his whole Han Solo schtick again, but given that he’s dealt a brand of masculine solemnity that Star-Lord eschewed, he’s less Andy Dwyer and more Burt Macklin, delivering painful, forehead-slapping lines like “It’s part-raptor!” or “It’s not eating! It’s hunting!” with a thud. Meanwhile, whatever criticism Joss Whedon tossed a couple months back at Bryce Dallas Howard’s role seems apropos, as she plays this confused heroine who’s subconsciously guilted into some idea of motherhood because, well, she works too hard at her job. (Mind you, they also have her running around from dinosaurs in heels.) Together, the two are in charge of rescuing her nephews — a moody, girl-gazing teenager (Nick Robinson) and his younger, precocious brother (Ty Simpkins) — who are struggling from losing their parents to divorce in a plot thread that’s shooed in straight out of Spielberg’s thematic rolodex.

Beyond the principals, Vincent D’Onofrio plays, you guessed it, the villainous patsy for InGen, whose name ought to be Basil Exposition given the brutal amount of context he dishes out; B.D. Wong reprises his Dr. Wu role and becomes this franchise’s Dr. Wynn a la Halloween; and Jake Johnson and Lauren Lapkus provide laughs as the friendly, quirky tech operators. Out of everyone, the only faces that ring true are the latter two. Johnson plays a nostalgia junkie, wearing an original Jurassic Park tee that he bought on eBay for a hefty sum, and whose computer desk is littered with plastic dinosaurs. While Lapkus acts as his partner-in-crime, coming across as the only person who actually gives a damn at what’s happening to everyone. They’re brief roles, admittedly, but soulful enough to remind viewers that, yes, Trevorrow knows how to strike up chemistry. Outside of that, um, hold on to your butts.

Nevertheless, there’s a startling amount of fan service in this sequel that might win audiences over. After all, Trevorrow has been quick to admit his admiration for the original. “I was a teenager who wanted to be a filmmaker and thought I had it all figured out. Went in to dismantle it and break it apart and figure out how they did this, and realized, well, I don’t know how they did this, and it turned me into a little kid,” he told The Daily Beast. “The story, the dinosaurs, just the journey it took me on. It took me back to being an 8-year-old. That became the mission for this.” Bold references to the original are aplenty — from certain expensive goggles to familiar gas-guzzling jeeps — yet they take on an almost wistful feeling, reminding us of a time when this franchise was still so innocent, so genuine, and so original. Perhaps that’s what Trevorrow intended to do when he signed on to direct a big-budget sequel for a tentpole franchise owned by a major conglomerate studio.

In the same interview, the young filmmaker adds: “We live in a very cynical world and one in which we charge ourselves with taking the mask off anything that’s meant to entertain us in any way, and I wanted to try to bring people so deep into the story that they would kind of just forfeit their right to take the mask off, and enjoy the experience.” But that’s not what he did, and if that’s what he set out to do, then he failed. Because, if anything (and above all else), Jurassic World urges its viewers to take off that proverbial mask and scoff in jest and feel like shameful morons for ever buying into the toyetic master plan that Universal has been capitalizing on for two decades. If that’s truly the case, then there’s arguably an underlying wisdom to Trevorrow’s campy vision — and there are certainly those who might applaud his nestled subversions — but to quote Dr. Alan Grant, “Where’s the fun in that?”

(Read: The Jurassic Park Franchise: What the Hell Happened?)