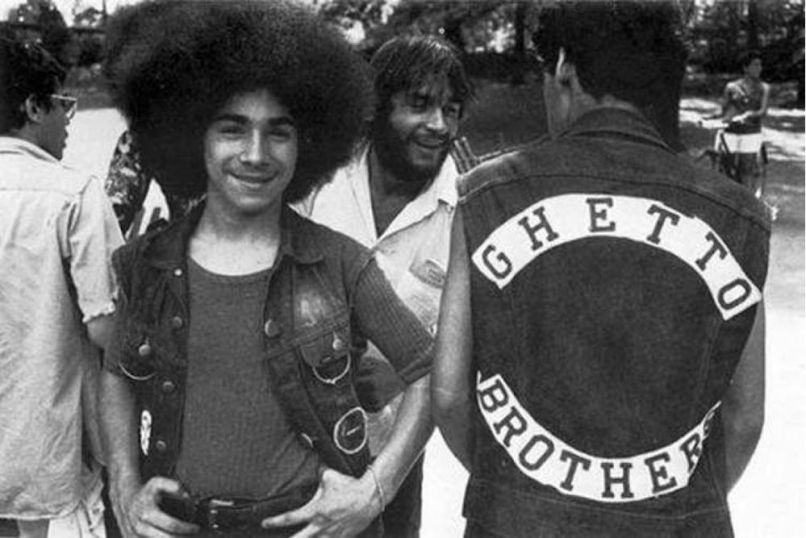 The New York City depicted in Shan Nicholson’s new documentary, Rubble Kings, is a reminder that “post-apocalyptic” need not be limited to descriptions of the future. The film’s ravaged landscapes are every bit as unsettling as those in Mad Max: Fury Road, its characters every bit as ruthless. The South Bronx in the early 1970s was a breeding ground for outlaw gangs with names like Savage Skulls and Black Assassins, whose members responded to the harsh physical realities of their borough by joining forces and drawing turf lines. It almost didn’t matter who the enemy was, so long as you had a crew to go to war with.

But one gang, the Ghetto Brothers, did more than mop the concrete with their rivals’ faces. Led by founder “Yellow” Benji Melendez and president Carlos “Karate Charlie” Suarez, they looked beyond the demarcated blocks of their neighborhood and saw the systemic forces that trapped South Bronx residents in a cycle of violence and abject poverty. Everywhere they looked were signs that the seeds that buoyed the Civil Rights Movement had failed to take root. “They killed the King, and then they killed Kennedy,” Suarez recounts. “My heroes died in the ‘60s.” The Ghetto Brothers’ solution was to become their own heroes — to rise above the violence and take everyone else with them. “We are gonna take you higher!” became their song, their slogan, and their calling card.

Drawing almost solely on primary sources such as Melendez, Suarez, and other prominent gang leaders, Rubble Kings recounts the moment this slogan met its greatest test: the 1971 killing of Cornell Benjamin, the “peace ambassador” from the Ghetto Brothers who was shot while attempting to broker a truce. If this plot point sounds vaguely familiar, that’s because a variation of it appeared in Walter Hill’s 1979 cult classic The Warriors.

While parts of Rubble Kings do play like a real-life version of The Warriors, Nicholson opts against including dramatic re-enactments of violence in his film. He uses what footage he can gather and otherwise leans on his cast of characters to paint a vivid picture of Benjamin’s death and the boroughwide gang truce that followed. Perhaps he gives these subjects a bit too much face time with the camera, but they prove up to the task anyhow, responding with colorful anecdotes and thoughtful ruminations on an era that history textbooks have largely ignored. Melendez serves as the emotional anchor, and his onscreen charisma makes it easy to imagine how he could have risen to the top of a street gang. Hearing him talk so passionately about his Puerto Rican heritage and seeing him tear up while recounting the night of Benjamin’s murder, one almost forgets that this guy is as hard as they come.

Rubble Kings would be merely a good film if Nicholson had limited his scope to that fateful night and its immediate aftermath. The fact that he takes the long view makes this necessary viewing. The Ghetto Brothers broker their gang truce about three-quarters of the way into the film; the final act is reserved for the profound cultural fallout of this truce, which includes the rise of hip-hop music and New York City’s now-famous DJ crews. Nicholson does an admirable job tracing the invention of hip-hop back to the Ghetto Brothers’ landmark truce, which essentially replaced gang life with wild block parties and come-all social events. Early hip-hop legends like Kool Herc and Afrika Bambaataa are on hand to recount how turf wars gradually became rap battles and how a couple dozen street gangs finally brought forth the peaceful revolution the ‘60s had failed to deliver. Looking back at these guys’ patch-covered jackets and penchant for leather, it’s not hard to squint and see a kernel of punk’s lineage, too.

There’s no shortage of brutality in Rubble Kings, and the nihilism on display in the film’s first half will be enough to shock the more sheltered viewer. But the film is ultimately a celebration of New York’s social and musical past, and its unflinching approach to violence shows that Nicholson will not make concessions for the sake of sentimentality. Real life is a messy, bloody, haphazard affair, punctuated by soaring highs and crushing lows. Bless the documentarian who strives to make his work the same.