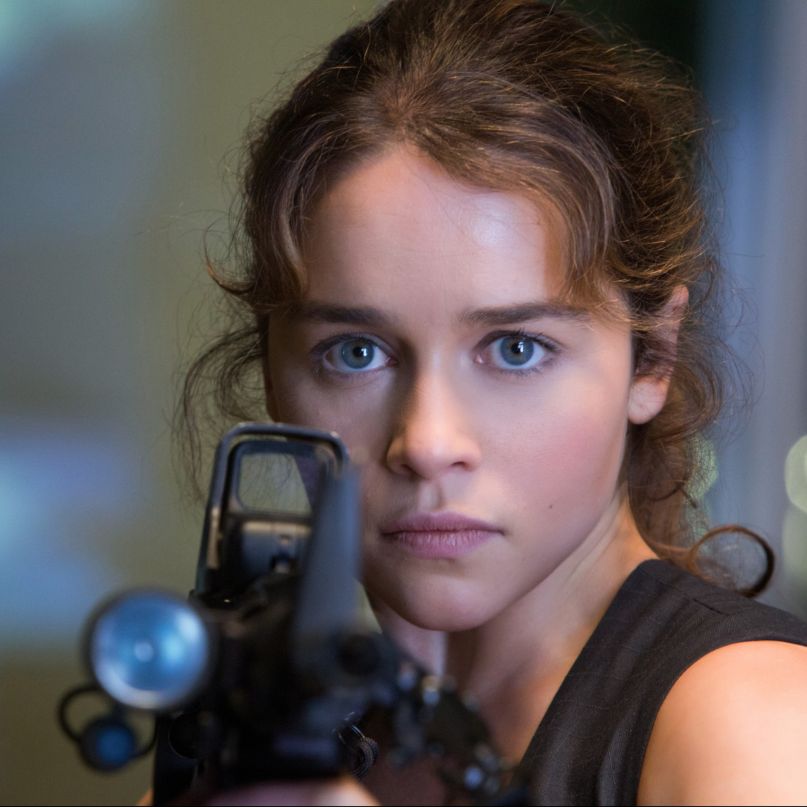 James Cameron believes in Terminator Genisys. A few weeks ago, the proverbial godfather of the franchise told Yahoo! Movies that he had seen Alan Taylor’s new film and that the series’ fourth sequel took him on a journey. “I feel like the franchise has been reinvigorated, like this is a renaissance,” he explained. “You look at why the films became classics. They had characters that you like. In the new film – which in my mind I think of as the third film – we see Arnold [Schwarzenegger] take the character even farther.” He then applauded the film’s principal antagonist (a plot point that even trailers couldn’t contain), adding: “The idea of taking John Connor and flipping him to the bad guy. It’s pretty cool because you’ve got to riff against expectations. It’s all about the twist.”

He’s right, and screenwriters Laeta Kalogridis (Shutter Island) and Patrick Lussier (Drive Angry 3D), to their credit, try really, really hard to do something different with Terminator Genisys. Tearing off a page from FOX’s highly underrated series, Terminator: The Sarah Connor Chronicles, Kalogridis and Lussier terminate the last two sequels — Jonathan Mostow’s Terminator 3: The Rise of the Machines and McG’s Terminator Salvation — and literally turn back the clock by altering time lines and revisiting past characters like Kyle Reese, Sarah Connor, and even Miles and Danny Dyson. They also introduce the first truly formidable foe since Robert Patrick’s T-1000, an agreeable upgrade by Skynet titled the T-3000, a nanomachine hybrid that infects the future John Connor.

These are the attributes of the film that probably tickled Cameron’s bones. Though, it presumably helps that the creative team also adopted a few of his original ideas. Last October, the blockbuster filmmaker admitted to Deadline that he devised a clever way to utilize the 67-year-old Schwarzenegger and explain his aging: “I pointed out that the outer covering (of the Terminator) was actually not synthetic, that it was organic and therefore could age. You could theoretically have a Terminator that was sent back in time, missed his target, and ended up just kind of living on in society.” Here’s the real meat within that idea: “Because he is a learning computer and has a brain as a central processor, he could actually become more human as he went along without getting discovered.”

That idea is a major component of Terminator Genisys and one of the film’s few original hallmarks, if only because we haven’t seen that done before in any of the films. The same goes with the nanotechnology behind the T-3000 and the time-traveling wizardry that fuels the film’s erratic storyline. They’re rare sparks of ingenuity for this franchise that sadly never ignite, and not exactly to the fault of Kalogridis and Lussier. The two writers go full nelson with these tools, and they desperately attempt to turn this into the iconic rollercoaster that Cameron built decades ago with Terminator 2: Judgment Day. Rarely does this film stop to breathe or recalibrate, shifting from post-apocalyptic worlds to abandoned factories to hospitals to freeways to bridges to helicopters and beyond.

Which is a problem when you’re trying to establish so much. Call it gluttonous, ambitious, or straight-up reckless, but Kalogridis and Lussier installed multiple threads, storylines, and relationships into Terminator Genisys. There’s the bond between Sarah and the elder T-800, who was sent back to 1973 to save her from a T-1000 assigned to kill her family at their remote cabin up in Big Bear, California, leaving the two parents scorched and her to be raised by the T-800, who she comes to know as “Pops.” (Breathe in, breathe out.) Then, there’s the love affair between Sarah and Kyle, which has always been one of the greatest romances in sci-fi history, only now relegated to annoying dialogue akin to Sam and Diane of Cheers. (Sigh. That’s not all.) Then, they have to mettle with their own respective connections with John.

None of this would be so much of a problem if it were all refined and executed properly. The problem is that you need a capable filmmaker to orchestrate that process, and Alan Taylor is questionable at best. Granted, he’s delivered for critically acclaimed series like The Sopranos, Game of Thrones, Mad Men, and Sex and the City, but theatrically, he’s coming off 2013’s underwhelming Marvel sequel, Thor: The Dark World. As such, there’s little vision to Terminator Genisys outside of the obvious aping of the original two films and a paint-by-numbers approach to the script. The action’s tepid and overwrought, the pacing’s running off Mountain Dew: Code Red, and there’s a questionable tone throughout. For example, at one point, Inner Circle’s “Bad Boys” plays when the principal characters are arrested — no lie.

Save for Schwarzenegger, Jason Clarke, and maybe J.K. Simmons, whose role of a believer goes without purpose, the rest of the cast feels like they’re parading around in Halloween costumes. To be fair, Emilia Clarke does her best to adopt Linda Hamilton’s portrayal of Sarah, but she’s never given the rare intimacy that Hamilton was in either of the first two films. As for Jai Courtney, it’s about time Hollywood stops shoving this guy down our throats. Not only is he too masculine and stubborn for the unassuming yet intuitive Kyle Reese, but he’s far less convincing, which is a minor crisis given that the film revolves around his point of view. This isn’t surprising; after all, he told Hero Complex back in March that he wasn’t going to study Michael Biehn’s work, arguing that he “wasn’t hired for the job to emulate someone else’s performance.” Okay, pal.

(Read: Why Kyle Reese Is the Most Interesting Action Hero)

Yet, isn’t that the problem today in this fan-fiction era? When studios and filmmakers decide to capitalize on nostalgia by servicing the fans with old stories and familiar faces, especially those long thought to be dead or finished, there’s an inherent degree of expectation to the proceedings. Those same expectations are even higher when there’s a recalibration of old material, which is something that plagues Terminator Genisys and will most certainly affect what J.J. Abrams does with Star Wars: The Force Awakens and whatever Neill Blomkamp has up his sleeve for his Aliens reimagining. It’s a pressure system that rings arguments like Courtney’s false, specifically because this isn’t “a standalone film,” and, no, the character hasn’t changed. Well, at least not to the degree that they should be unrecognizable.

That’s what ultimately shuts down Terminator Genisys: There isn’t an identity. It’s a scrapbook of past catchphrases, costumes, and names that are unnecessarily reawakened with an assembly of bold ideas that implode before take off. Had Justin Lin remained on board, maybe we’d be looking at a different film, one that isn’t starving for the meditative portraits he’s painted on this season’s True Detective. It might have even fared better had the casting director opted for the leaner Boyd Holbrook over Courtney. Or if Hans Zimmer stepped to the mainframe ahead of his underwhelming understudy Lorne Balfe. Who knows. That’s all somewhere in another timeline, where the same ol’ studio system still insists upon this same ol’ predictable corruption of dead-end brands. When will this end, Hollywood? Well, as Jurassic World slowly claws its way up the record books, we know the answer…

There’s no fate but what box office we can make.