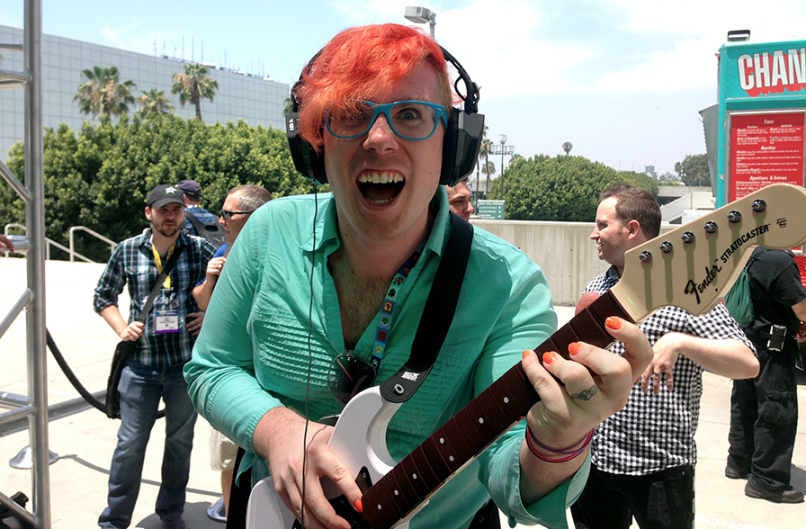 Every year, the E3 Expo strings together thousands of the best, brightest, and most innovative professionals in the interactive entertainment industry at the Los Angeles Convention Center, where the video game industry’s top talent premieres their top-of-the-line software and products. Last week, Art Director and Senior Staff Writer Cap Blackard attended this year’s convention and has returned to share his reports on two music-related games, Guitar Hero Live and Rock Band 4.

The Guitar Hero you knew is dead and gone — and that’s a good thing. After a five-year hiatus, the former rhythm game giant has emerged from its Odinsleep completely reimagined. Guitar Hero Live slips the shackles of the series’ sordid past. Much to our surprise, it’s discovered new ways to rock the genre.

When Guitar Hero debuted in 2005, it was lightning in a bottle. The brainchild of music game maestros Harmonix and controller developer RedOctane, Guitar Hero put a plastic guitar in players’ hands and started a living room revolution of rock star fantasies. Venerable game publisher Activision bought the brand and RedOctane early into the series’ success and parted ways with Harmonix, who continued to evolve the genre into something that better emulated playing actual music with Rock Band. Meanwhile, Activision pushed for the bottom line: churning out games as fast as possible. In five years, 25 Hero-branded titles came out across every conceivable platform, filling homes with plastic peripherals and burning out the market.

Guitar Hero Live embodies a reflective and intelligent approach to the brand by considering its core audience: casual gamers looking for a unique rhythm experience. Unlike Rock Band, the Guitar Hero games weren’t interested in connecting gamers with the nuances of literally performing music, but the simple pleasure of beat-matching buttons in a rock ‘n’ roll setting. This is a rhythm game built to be exclusively that. Plastic guitar in hand, you’re ready to shred.

The reinvention of Guitar Hero lies directly in the guitar itself — it’s an all-new experience. Gone are the five colored buttons in a row down the guitar’s neck. Instead, they’ve been replaced by six smaller buttons, three on top of three. When the notes come streaming at you like in the old days, they’re now either black guitar picks pointing up (the top row) or white picks pointing down (bottom). No more pinky stretching to master that dreaded orange button in expert mode. It’s “easy to pick up and hard to master,” says Emilie Villeneuve of FreeStyleGames, the new developers of Guitar Hero. She’s right. The new system was immediately intuitive from a gaming standpoint. In fact, the only thing holding me back from diving right in was unlearning the hand movements of the old controller.

I came in skeptical, but I could feel right away what a difference the simpler controls made. The learning curve was minimal. FreeStyle has distilled Guitar Hero into its optimal form: a game of timing and reflexes set to your favorite songs. The rock star fantasy aspect of the game is in full swing as well and in a truly unexpected format.

The “Live” in Guitar Hero Live comes from its single-player mode where you can play along with the game’s included tracks (74 and counting) from a first-person perspective onstage across several venues, from clubs to festivals. Gone are the cartoon avatars; this is real life. FreeStyle filmed with live bands in front of live audiences, who all react to the song you’re playing based on how well you’re doing. It’s like a rock ‘n’ roll fever dream where you’re the star guitarist and have the power to either bomb a show or play a legendary set. Crowds will cheer or boo you. Meanwhile, your bandmates will either rock beside you, or, if you’re flubbing notes, harass you. The drummer’s scathing “fuck you” death stare as I feebly plucked my way through “When You Were Young” is one of my favorite memories from this year’s E3.

The stage is just one mode of play. Not quite as impressive but equally original is GHTV, a streaming, interactive music video station. On day one of the game’s release, GHTV will start airing a curated selection of over 200 classic music videos, with more regularly added to the rotation. You can just leave it on and have a temporary portal to the MTV of yore, or you can jump in at any time and start playing along, the gameplay superimposed over the video. Users can also play GHTV tracks at will, but for a virtual price of “plays.” Plays are an in-game currency you earn by playing the game; if you need a quick fix, you can buy more for real money. You can also purchase permanent access to a song, but FreeStyle doesn’t anticipate many people doing either of these options.

With that in place, traditional downloadable content of songs and track packs as seen in Rock Band and prior Guitar Hero titles are gone. In their stead is “premium content” such as exclusive performances from bands like Avenged Sevenfold that you can play along with. By all present accounts, the game is being made to be supported as a constantly growing standalone title. Buy Guitar Hero Live and you should be rocking for a good long while.

It’s easy to tell that I wasn’t a fan of post-Harmonix Guitar Hero, but Guitar Hero Live quickly won me over. FreeStyle’s spin on the series turns over a new leaf creatively and conceptually. Provided that the powers that be at Activision don’t take any future success as an invite to once again bleed the genre dry, the return of Guitar Hero heralds in a new age where coexistence between music and rhythm games is possible. If you’re looking for a gaming experience that’s indelibly tethered to the act of making music and collaborating with friends, then Rock Band 4 is more your speed. If you loved clicking away on a guitar controller and racking up points to fun rock visuals — Guitar Hero Live is the game for you.

The act of performing music is a profound one, whether it’s creating something new or communing with your favorite songs by singing along at the top of your lungs. For some, the transition from loving music to learning to play music is an easy one. For others, the gift of making music is unrequited. There’s not often a middle ground where music lovers of all skills can share the experience of performance and musical collaboration. That’s what makes Rock Band so special. That’s why the series’ return with Rock Band 4 should have you ready to get the band back together.

Harmonix, creators of Rock Band, specialize in the gamification of music and have become the industry experts in creating a stepping stone between playing music and playing with music. That’s how seasoned musicians can have a blast playing for points alongside their novice friends. That’s how, since Rock Band’s debut back in 2007, countless passionate players have taken the fundamentals taught by Rock Band and become actual musicians. That’s how someone like me, who’s hopelessly devoted to music but can’t play a note, can experience the thrill of growing my vocal skills while rocking out with friends.

With Rock Band, Harmonix continually improved the interactive music game experience. What started as beat matching evolved into Pro modes, putting player’s skills to the test. And what started as an extensive library of some of the greatest music of the 20th century expanded to include user-created tracks from their own bands. In Rock Band 4, Harmonix is doing more than playing their greatest hits; they’re porting the entire Rock Band experience to the next generation of gaming and crafting everything you love about the series into a perfected rockstravaganza.

In the five-year hiatus since Rock Band 3, the community Harmonix cultivated has kept the fire. Quite simply, even without a new game, rock ‘n’ roll never died. Rock Band 4 picks up right where they left off to the extent that the bulk of nearly all previously released music (over 2,000 songs) will be available from day one. Any tracks you’ve previously bought are still yours, provided your next-gen system is the same brand as the last (no Microsoft/ Sony crossovers). What’s more, nearly every Rock Band peripheral, from first generation guitars to the obscure lighting and effects Stage Kit, will work with the new game. But chances are you knew all that already; tales of Rock Band 4‘s backwards compatibility have been the toast of the town. Let’s get down to business: I played the new game, and it was awesome.

At face value, aside from the HD graphics, nothing has changed. All the buttons are where you expect them to be; the interfaces are all very familiar. With Rock Band 4, the name of the game is “creative player expression.” Music is as fluid as it is mathematical, and Harmonix has taken strides to incorporate the improvisational nature of playing. In past games, guitar solos were fixed, while drum fills and vocal freestyles were free-form to a fault. Now each of the improvisational elements not only emphasize player creativity, they actually sound good. Here’s an example:

Okay, you don’t really have to scrutinize all that — it reads quite complicated, but it’s actually really simple. In any song featuring a guitar solo (yes, even the old tracks), you’ll be able to build your own solo. Rock Band 4 pulls from a library of audio matching the song at hand and generates suggestions indicated by the above visual cues. The game’s suggestions aren’t directly prescriptive to the player’s solo score, but can help offer guidance as to where to find the most complementary sounds for the song, effectively saying things like, “Maybe some quarter notes here, or try some finger tapping.” Truly next gen tech at work: Prompts won’t be the same in every playthrough, and these improvisations do truly sound like they belong in the song — even if you’re taking it in discordant places.

The drum fills are dynamic, and the vocal freestyling options (playable on Hard difficulty or above) offer a long-needed flexibility in how the game interprets “correct” singing. Rock Band has always had a great system for presenting vocals, superior to all karaoke games. But even the most talented singers could get frustrated with the rigidity of adhering to a single pitch to stay in the game. Now, so long as you’re in the right key, vocal improvisations will be rewarded. With these additions, Rock Band 4 truly expresses the spirit of live performance.

However, it’s not all gain for Rock Band. They’ve also trimmed off some dead wood: the keys and pro guitar of Rock Band 3. Both features were very, very cool; I personally loved the amazing mini keytar. But the simple fact was that by and large no one was using them. A year after Harmonix unveiled the ability to play Rock Band with a special Fender guitar, Rocksmith debuted, offering a platform that could hook up to virtually any guitar and served as a better educational tool. Pro keys and guitar were beautiful, advantageous ideas that unfortunately only served to overcomplicate.

Fortunately, not all pro modes are gone. Pro drums and vocals are alive and well. And while you can certainly dust off the old gear, if you were ever considering an upgrade, now’s the time. The drum pads are sturdier, more velocity sensitive, and the kick pedals are metal reinforced. The guitar is tougher, sleeker and still distinctly more awesome than the Guitar Hero controller, which in its latest incarnation still remains toy-like. Even the mic has been beefed up, with increased sensitivity and a longer cable for less catastrophic couch-diving.

Only a fraction of Rock Band 4‘s new tracks have been announced so far, but they feature a solid roster, from Mark Ronson to Fleetwood Mac, Jack White to Spin Doctors. And, making his video game debut, Elvis with “Suspicious Minds”. Mercy.

The game debuts October 6th — plenty of time for tryouts to replace that good for nothing drummer of yours.