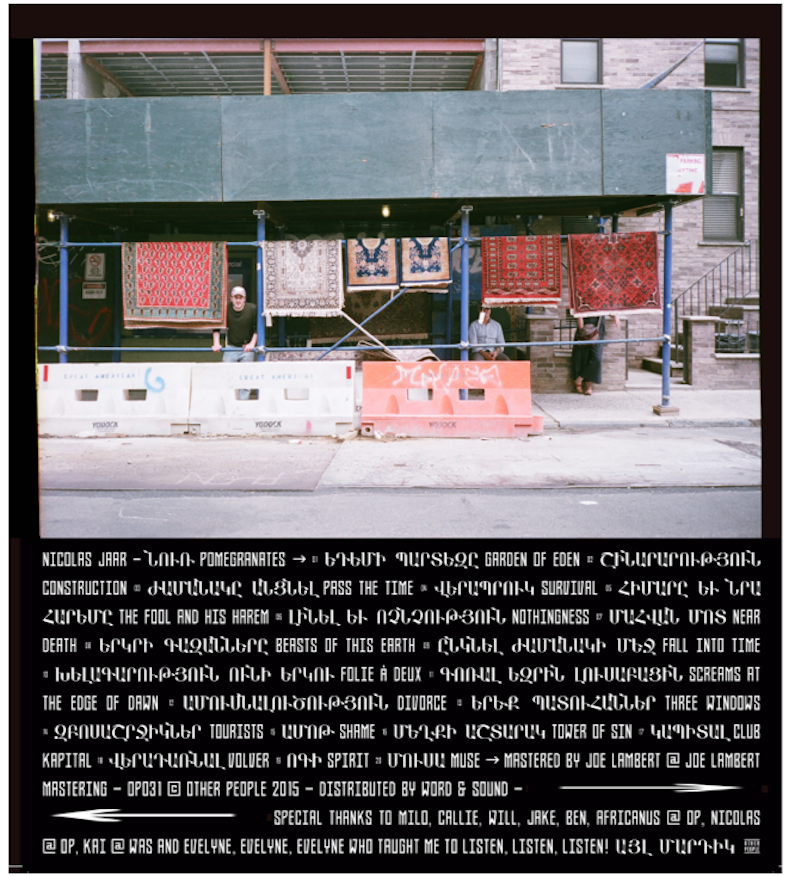 Earlier in the year, electronic producer Nicolas Jaar debuted an original score for The Color of Pomegranates, a 1969 Armenian film from director Sergei Parajanov. Today, Jaar has released a free download of the LP version of the soundtrack.

The download comes with a message that says, “THIS VERSION OF POMEGRANATES DOES NOT SYNC WITH FILM.” There’s also a lengthier note in which Jaar explains the origins of some of the songs. Most began before he had any knowledge of Parajanov’s movie. “Garden of Eden”, for example, was Jaar’s soundtrack to a large water bug dancing on some cables in his studio. “Shame” is a rejected rap beat and “Survival” is an early version of DJ Slugo’s “Ghetto”.

Jaar goes on to reveal that some of the music comes from “hours of soundtrack” he made for a TV show before he left when he realized “the show was not what I signed up for.” “I only used a dozen minutes of it for Pomegranates,” he notes, “not sure what to do with the rest!” He adds, “‘Volver’ is a choir version of an unreleased track called ‘Revolver’ I made in 2011 that will come out this year hopefully.”

You can read the whole note below, including a picture of a serendipitous tree, and download Pomegranates here.

I started making most of the music that is found on
“pomegranates” before I had seen the movie or was aware of its
existence.

The first song, for example, was made on one of the first fall
nights of 2014. I had just returned from a year-long Darkside
tour and was really happy to be back home. I was making music
in my living room when a huge water bug started dancing on top
of some cables on the floor. Instead of killing it, I decided to
make music for it. I called the song “Garden of Eden” because I
slowly started seeing the little creature as my friend and
helper, and my studio as a garden (with all the wires!).

The next song was originally made for a TV show that I was asked
to score. When it became clear to me that the show was not what
I signed up for, I decided to part ways, which left me with
hours of soundtrack music. I only used a dozen minutes of it for
“pomegranates”, not sure what to do with the rest!

“Survival” was originally meant to be the backing track for
“Ghetto”, a track I produced for Dj Slugo where he talks about
growing up in Chicago.

“Shame” is a beat I made for a rapper, that was declined.

At the end of 2014, I lived with my parents for six months while
in between apartments. I didn’t have a studio, just a piano,
some microphones and headphones. That’s when I wrote “Muse”.

“Volver” is a choir version of an unreleased track called
“Revolver” I made in 2011 that will come out this year
hopefully. Anyways, I could go on and on.

At the beginning of 2015 my friend Milo heard some of these songs
and told me about the film. I watched it and was dumbfounded. I
felt the aesthetic made complete sense with the strange themes I
had been obsessed with over the past couple of years..I was
curious to see what my songs sounded like when synced with the
images, which turned into a 2-day bender where I soundtracked
the entire film, creating a weird collage of the ambient music I
had made over the last 2 years.

The film gave me a structure to follow and themes to stick to.
It gave clarity to this music that was made mostly out of and
through chaos. It also gave me the balls to put it out… I
wanted to do some screenings but the guy who owns the rights to
the film only wants the original version of the movie out there.
I can’t blame him, I’m sure Paradjanov wouldn’t want some kid in
NY pissing all over his masterpiece and calling it a soundtrack!
I’ve listened to it a couple of times without watching the movie
and I think it stands on its own. Or at least I hope it can!

I was still living at my childhood home when I finished
“pomegranates”. On March 1st, I arrived in my new home and it
was completely empty except for a baby tree. The owner was there
to greet me and he asked me if I wanted to keep the baby tree
because he had nowhere to put it and no one to give it to. I
agreed to keep it and take care of it.

Before he left I asked him what kind of tree it was. He told me
it’s a pomegranate tree. He had no idea I had just put this out!

So there it is, it’s yours now!

ps. check the pic of the little tree!”