One officer was injured and several people were arrested 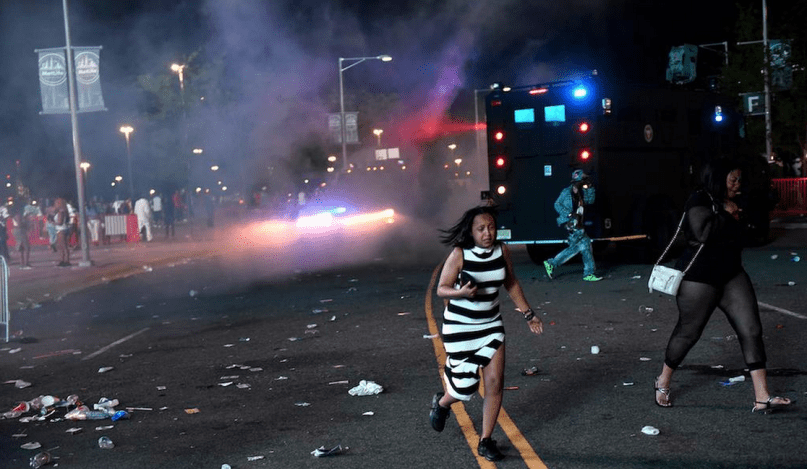 The annual New York City hip-hop festival Summer Jam devolved into a tense and scary situation as police fired tear gas at a group of attendees.

In a statement, New Jersey State Police said, “This evening, security personnel at one of the entrance gates to MetLife Stadium were confronted by crowds attempting to illegally enter the sold out Summer Jam concert by climbing over fences and forcing their way through security personnel. The gates have been shut and troopers on site have called for assistance from several nearby stations to help maintain order. Troopers and stadium security officials are insisting that all people outside of the gates depart the MetLife grounds to avoid congestion when the concert lets out. There is no number of arrests available at this time.”

Update – Monday, 4:30 p.m.: A total of 61 people have been arrested and 10 officers were reportedly injured, according to Gothamist. In a new statement, police authorities note that “charges for those arrested ranged from soliciting without a permit and trespassing to possession of a weapon and assault. The majority of charges were for disorderly behavior.”

Below, watch raw video of the scene outside MetLife Stadium, followed by police officials’ latest statement.

The Summer Jam 2015 concert held at MetLife Stadium last night (Sunday, June 7) saw an unusually high number of disorderly people resulting in the arrest of 61 people and minor injuries to 10 troopers. The majority of arrests occurred because of concert goers climbing fences and trying to push past security at the MetLife entrance gate.

Troopers assisted with closing the gates to restore order. They were briefly re-opened to try to accommodate those with tickets who had not yet entered, but they were closed again when non-ticket holders attempted to push their way in. Some legitimate ticket holders were not able to get into the concert because of the dangerous and illegal actions of others.

Multiple people in the crowd outside the gate threw bottles and trash at police and security. Troopers used protective equipment including shields and helmets to avoid injuries from flying objects. Additional troopers were called in from nearby stations to assist. Noise generators, pepper spray, and tear gas were used to disperse people who refused to clear the area outside of the main gate.

Charges for those arrested ranged from soliciting without a permit and trespassing to possession of a weapon and assault. The majority of charges were for disorderly behavior.

Troopers arrested 51 people at last year’s Summer Jam concert at the same venue. The history of concerts or sporting events is taken into account when the State Police plan for the contingent of troopers to work a specific detail. This concert was staffed with more troopers than last year.

“A small group of highly disruptive people ruined this concert for many others. They created a danger to ticket-holders, stadium employees, and troopers on the scene. Our troopers took the appropriate steps to restore order to what was a brief and volatile situation,” said Colonel Rick Fuentes, Superintendent of the New Jersey State Police.