"At the end of the day, we're the luckiest fuckers in the world" 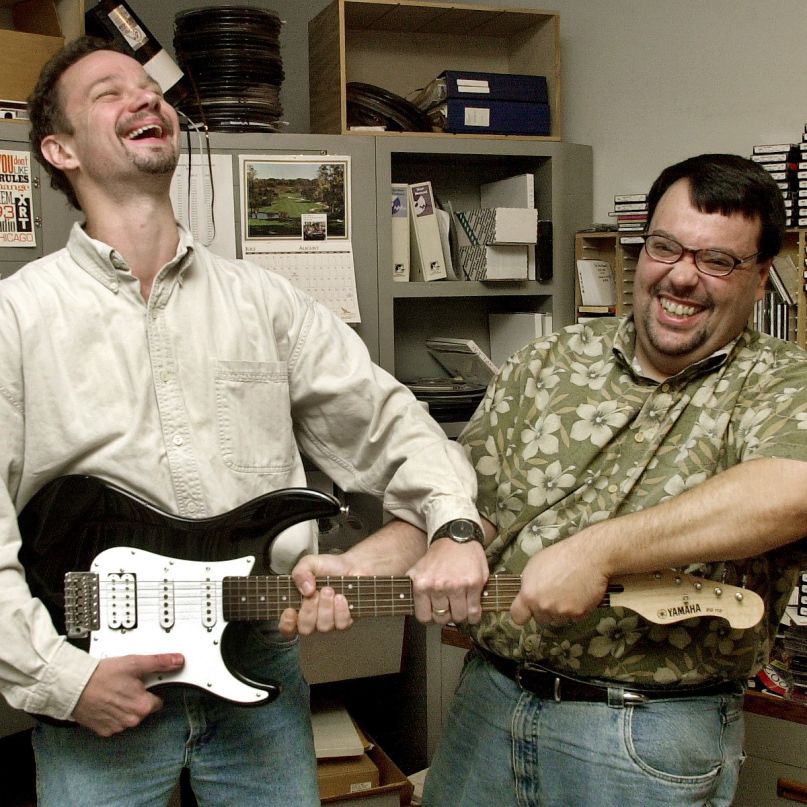 Sitting next to each other watching the Jesus Lizard at the Vic Theater in 1993, Greg Kot and Jim DeRogatis can’t agree on much of anything. Kot, the Chicago Tribune’s longtime music scribe, loves the band’s unrestrained noise rock and volatile energy. DeRogatis, his counterpart at the Chicago Sun-Times across town, is dismissive of them. When the conversation turns to their favorite records of the year, DeRogatis champions Nirvana’s abrasive-sounding In Utero, produced by Steve Albini. Kot makes an impassioned plea for the Flaming Lips’ Transmissions from the Satelite Heart.

“When it actually came time to pick our year-end best records, he picked the Flaming Lips,” Kot recalled with a laugh.

It’s exactly these kind of incisive, needling debates that drive the Kot-DeRogatis musical marriage. They are living proof that opposites attract, two seasoned newspaper vets and ravenous music nuts who nonetheless come at the object of their obsession from two very different perspectives. Kot is sharp but even-keeled in his writing. DeRogatis, on the other hand, writes with a sort of blunt mischievousness that has gotten him on people’s bad sides on more than a few occasions. Ryan Adams has left voicemail messages. Jann Wenner once gave him his walking papers from Rolling Stone.

Despite their differences, or really because of them, the two have emerged as two of music journalism’s strongest pillars — not only in their backyard of Chicago, but nationwide. Since 1998, Kot and DeRogatis have agreed, disagreed, and more often than not explored the plentiful space in between on a wide variety of musical topics on their long-running talk radio show, Sound Opinions. The show, picked up by more than 100 stations nationwide, airs its 500th episode today.

“I don’t know if we anticipated that, but it’s worked out pretty great,” Kot said of the milestone. “In this age of quick turnover in media, getting to 500 episodes is an accomplishment, so I guess we’ll take it.”

Sound Opinions, which stakes its claim as being the world’s most popular rock ‘n’ roll talk radio show, began almost as a diversion, a side gig away from its hosts’ day jobs slinging copy. Now 17 years removed from their first episode together, Kot and DeRogatis are looked at as authorities on popular music the way two other towering critical voices from Chicago, Siskel and Ebert, were on film. But as strong as their partnership has grown over the years, the two weren’t fast friends. The circumstances of their relationship, rival scribes covering the same beat for rival papers, didn’t leave a lot of room for tying a few on after shows.

“Kot was sort of standoffish for a long time,” DeRogatis said, recalling their days crammed together covering shows in the balcony of the Metro. “We were competitors. Greg in general is a more serious person, a less garrulous person than I am. He really gets in the zone. He also coaches basketball. Coach Kot has this all business mentality when he’s working. We didn’t talk much.”

Kot agreed, but was quick to point out that while he and DeRogatis took their time warming up to one another, the two always had a healthy appreciation for each other’s work.

By 1994, both writers made their way into radio, although not together. DeRogatis launched an early incarnation of Sound Opinions with Bill Wyman, then the music critic for the Chicago Reader. Kot also had a show, but both were quickly canceled after failing to find an audience. DeRogatis left town for a stint at Rolling Stone and later moved to Minneapolis, where he revived Sound Opinions with a number of different co-hosts before returning to the Sun-Times in 1998. That’s when he reached out to Kot about teaming up on the air.

“I’d say 98 percent of what the show is today we sort of grafted together with our producers,” DeRogatis said.

From 1998 to 2005, Sound Opinions built a home for itself Tuesday nights from 10 to midnight at WXRT, then one of Chicago’s rock radio mainstays. Before long, the show found its audience. The duo ran the musical gammut, talking with psycho-tropical rock bands one minute and rock royalty like Tom Petty the next. Kot recalls scoring a particularly rare interview with filmmaker John Hughes, who gleefully reminisced about shopping at Wax Tracks and putting together the soundtracks of his classic teen flicks.

“If you listen to those old tapes from year one on WXRT, we don’t know what the hell we’re doing,” DeRogatis said. “We were sitting around arguing like two guys on the back porch about records. We talked right past commercial breaks, played cuts with the word ‘fuck’ in them. It was amazing what we got away with.”

“The audience seemed more compatible,” Kot said of WXRT. “We felt like we could talk about Black Sabbath one minute and the Divine Styler the next, and the audience would roll with it. We came in there and dissed Dave Matthews, who they used to play all the time. So we immediately came in and ruffled some feathers.”

As niche as the idea of two middle-aged guys talking sophisticatedly about music might sound, the duo’s unfiltered passion spoke to a nation of music fans whose blood pumped wildly for old X records and the new Kanye West songs in equal measure. Kot and DeRogatis’ conversational, everyman approach to musical discourse made for an inclusive two hours of radio that drew fans in.

“Frank Zappa had that famous line about how writing about music is like dancing about architecture,” Kot said. “I always thought that was ridiculous. Good writing is good writing. The arts should be written about and should be discussed. In Jim, I found a very worthy person to have serious conversations with about music. He was interesting because we didn’t agree, and that’s really how the show evolved. The listener can insert themselves in that and take sides.”

“There are those who think they know everything and are the last and final word on a subject, and then there are critics who understand that criticism is part of conversation,” DeRogatis added. “The way that we all come to understand the art is through discussion of very divergent viewpoints.”

By 2005, Kot and DeRogatis saw the need to grow the show beyond traditional radio. They wanted to do podcasts and engage with listeners through new media. When WXRT resisted, the duo took Sound Opinions to Chicago Public Radio, where the show found a whole new audience of music obsessives like themselves through syndication. Now operating for an hour every week from Navy Pier, the show is as strong now as it’s ever been, and its co-hosts have no plans on slowing down.

“There’s always things that we’re dying to do,” DeRogatis said. “We’ve always wanted to get Neil Young, and we always say, ‘We’ll get him this year!’ So we’re always looking forward to what’s coming.”

True to form, barely a day after taping their 500th episode, neither Kot or DeRogatis were in any mood for reflecting on the 17-year journey that’s brought them here. Instead, DeRogatis, who has since left the Sun-Times but still blogs for WBEZ in Chicago, was eagerly awaiting the next episode featuring Torres, or, better yet, the pre-Pitchfork show the week after. Like sharks, Kot and DeRogatis understand the one cardinal rule that has made Sound Opinions work: Keep moving forward. If you stop to look behind you, you’re in trouble.

But that isn’t to say that their accomplishments over the course of 500 episodes are lost on them.

“The one thing I take away from everything is there’s a very small group of people who put on this nationally syndicated show,” Kot said of the program, which in addition to he and DeRogatis is anchored by producers Robin Linn and Jason Saldanha. “That’s the best part, the opportunity to do something fun and cool with your friends. Jim, Robin, and Jason are my friends, and it’s great to be able to do something together.”

DeRogatis added, “The fact that we can, in the course of one show, interview John Cale, review a new Radiohead record, play a track by Bob Marley, and discuss some news story about Kanye West? At the end of the day, we’re the luckiest fuckers in the world.”